Tonight’s episode of Parizaad reflected more of the leading character’s feelings and journey. A new character was introduced in this episode and Parizaad met yet another old friend. I must say that it has been brilliant watching these characters from Pari’s past making comebacks. Even though these comebacks are getting monotonous owing to the situation all these individuals are in, it is always pleasant watching them yet again on screen. The producers and the director have definitely made sure that all the situations look as realistic on-screen as possible. The Annie/Parizaad sculpture scene and even the dialogues were heavily inspired by Lionel Richie’s song Hello’s video. I seriously doubt that this was merely a coincidence. However, I must say that the director definitely took it a step further by making sure that the viewers actually got to see the sculpture. And I also appreciate the fact that the sculpture did look a lot like Parizaad. It was nevertheless disappointing that even the dialogues were more or less the same as the music video, especially the part where Annie tells Parizaad that was how she “saw” him. I am definitely more interested in this particular track at the moment more than any other. This is definitely going to make or break Parizaad. 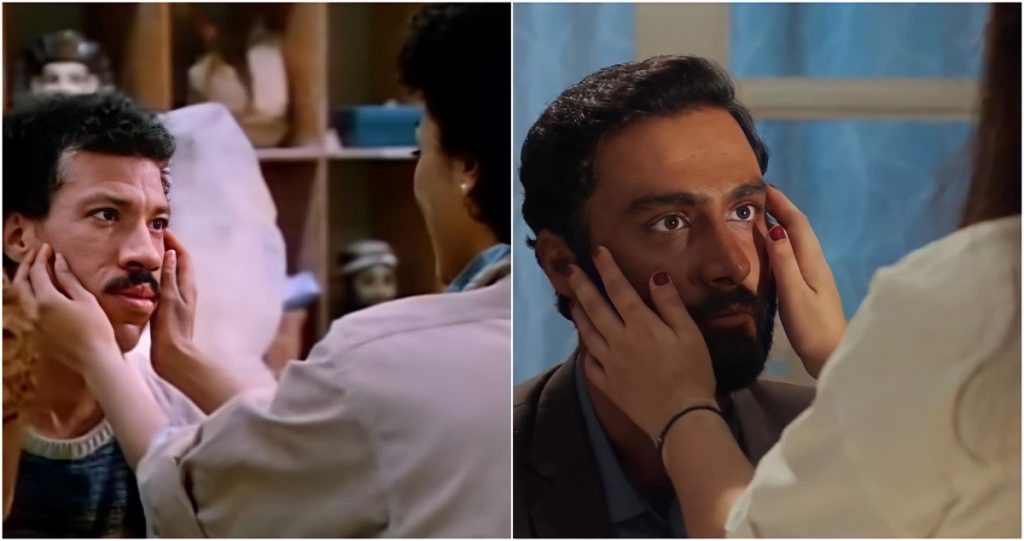 Parizaad’s dialogues have been giving mixed signals about his present feelings for Naheed and his general feeling towards love. On the one hand, it seemed as if he no longer felt attracted to her because he understood why she was now “attracted” towards him. Also, he clearly finds Annie appealing as well. On the other hand, the opening scenes in tonight’s episode suggested that he still felt the rejection with the same intensity as he did so many years back. Parizaad is still searching for the kind of love he always yearned for yet in his heart he has little hope that he will find it. It was already well established right from the beginning that Parizaad was attracted towards beautiful women, which is also interesting since his own looks have always been the one thing about him that made his life most difficult. It goes to show that just like most people Parizaad also finds the “unattainable” attractive!

It would be safe to say that some of the grey areas of Parizaad’s character can sometimes be confusing because overall the positive aspects of his personality always dominate. This episode also might have partially answered the question whether money can buy happiness! Parizaad is still miserable and feels that there’s no cure for the loneliness he felt the first time he was rejected by someone he was head over heels in love with. Although, this time around he “rejected” Naheed in perhaps the same manner in which she rejected him, the big difference however is that he did not use or manipulate her situation in any way. The fact that Parizaad continued to find ways to help Naheed out went to show that he was still the same person who forgave easily and did not believe in taking revenge.

Lubna is finally back in the picture. There was definitely a lack of continuity in this track because of her sudden disappearance. The audition scene was also needlessly stretched in this episode; it could easily have been chopped down. The introduction of the new characters finally leads to Parizaad’s meeting with Nasaaz. I was looking forward to this meeting yet I was somewhat disappointed because Nasaaz turned out to be yet another important character from Parizaad’s past that needed his help! I would have loved to see him as an accomplished writer without the aid of his old friend. Although this was the perfect opportunity for Parizaad to help an old friend who did not only save his life but also gave it a new meaning, it would have been good to see him in a different situation. Pari’s relationship and interactions with everyone from his past have been shown more or less in the same manner. The light-hearted moments between Parizaad and Nasaaz were a treat to watch, nevertheless.

Annie and Parizaad’s scenes clearly suggested that Pari felt attracted towards her. Was this attraction mutual? While Annie is fascinated by Parizaad, so far there is nothing that would suggest that she is in love with him. Yumna Zaidi’s expressions in some of the scenes especially the ones in which she had to translate Annie’s excitement on-screen were priceless. Annie comes across as a genuine person who would most certainly not hold back if she felt something more than reverence for Parizaad. It is interesting how Parizaad is allowing himself to get closer to this young lady even though he is constantly afraid of his heart being broken yet again. Because of this situation, the opening dialogues failed to make a lot of sense to me. They sounded like more than a depiction of a temporary state of mind.

Overall, this was an engaging episode, I am still as interested in Parizaad’s journey as I was before but I must say that some of the situations are turning out to be repetitive as well at this point. Also, the fact that some characters simply disappear from this drama does not sit well with me. Right now, apart from Saeeda, Kamali has also gone missing! I was not surprised to see the preview of the upcoming episode since Parizaad has been putting his life in danger even though he knows he has all these threats. Even though he wants to live, he does live on the edge!