This latest episode of Pehli Si Mohabbat was yet again filled with emotional scenes and it showed the inner struggles of some of the characters. Zainab’s track kept me guessing since there must be something more to everything we witnessed in this episode. Rakhshi finally decided to apologize to Aslam and Nargis seems to be ‘learning’ from Rakhshi. There were some scenes that were so relatable and others that were somewhat far-fetched. Overall, Pehli Si Mohabbat continues to be interesting. Right now, Nargis’ track has my undivided attention since she is clearly finding it difficult to ignore the fact that the only man she ever loved is back in her life and wants to meet her.

The scene in which she asks Faiz Ullah to stay or take her with him was one of the best scenes tonight since it highlighted her inner struggle and her commitment to this relationship. She is clearly ‘tempted’ otherwise she wouldn’t have called Farooq. We also found out tonight why Murad knows all the details about Zainab’s background through the conversation between Sikandar and his parents. I am glad that so far there is a proper explanation for everything and you are not left wondering for too long. Aslam is turning out to be more mature and protective of Rakhshi than I expected him to be therefore that was another pleasant surprise. Sheheryar Munawar performed exceptionally well in this particular scene.

Few of the central characters tonight made difficult decisions and decided to accept what fate had in store for them. Others took risky decisions and they will face the repercussions in the upcoming episodes. Rakhshi decided to get in touch with Aslam once again even though in the previous episode it seemed as if she would never do that. It seems highly likely that Akram will read the message she sent and show it to her father. Aslam leaving his phone behind was definitely far-fetched, I couldn’t relate to it at all. This was however a really important development since after reading these messages Faiz Ullah will know that Rakhshi was lying to him. With every passing episode, I am actually connecting to Rakhshi’s character more. She does not have the courage to take a stand for herself, she is constantly fearful but at the same time, the love she feels for Aslam makes her give in and takes these risks. Even after everything that happened, she decided to message him even though she told Nargis that she would never meet him but they will meet once again in the upcoming episode and this time around the meeting will lead to an even more dramatic turn than the ones we got to see recently. The fact that Nargis will be present there as well will make the situation even more complicated. 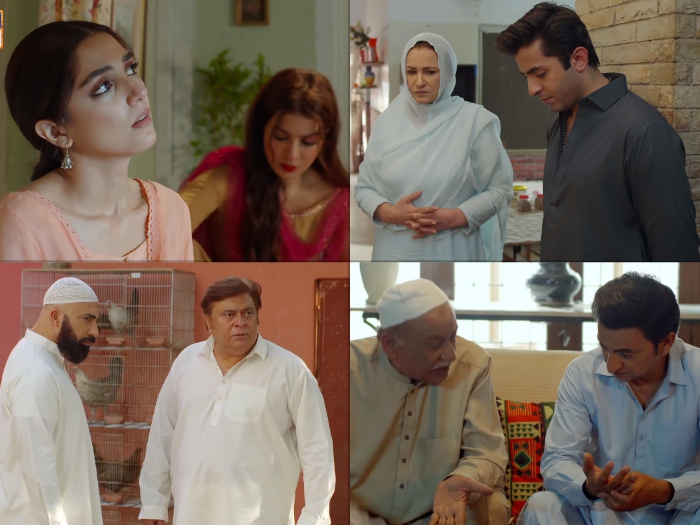 Nargis’ conversation with Rakhshi in the opening scenes was so well written. The way she analyzed this entire situation and considered Faiz Ullah lucky was such a beautiful way to put it! The family dynamics in most of these families are like this, some members are suffering to make others happy! Like every other episode, all the scenarios were interlinked. Had Faiz Ullah not gone to confront Yasmin and Akram, Rakhshi perhaps wouldn’t have messaged Aslam. She knew that Aslam will find out that she denied having a relationship with him and he will get hurt. He however never got to read the message! Aslam’s reasoning for covering up for Rakhshi was endearing. He has definitely grown in these few weeks and is also breaking quite a few stereotypes. Sikandar is bent on getting married to Rakhshi only because this time around he wants to be the one who causes pain to Zainab’s family. He knows that he is at an advantage now and does not want to let this opportunity go. 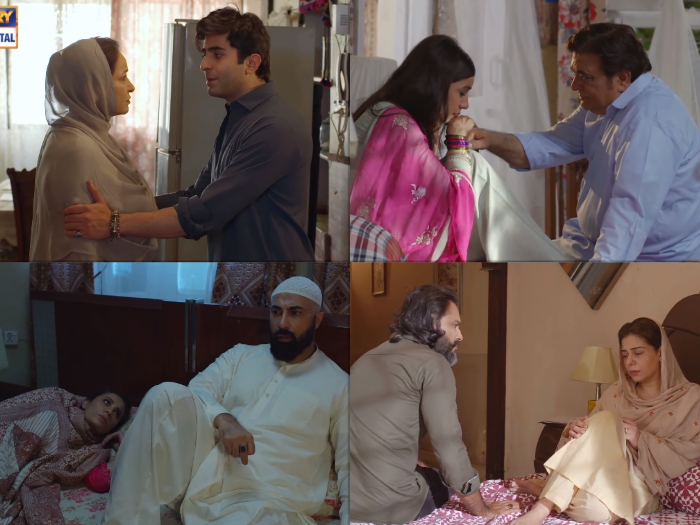 Zainab and Murad’s scene was once again acted out so brilliantly that their entire relationship dynamic literally reflected through it. Their scenes make one wonder how they spent so many years of their lives together! Akram’s comments about Murad in the previous episode make this entire situation even more relatable. He can be such a ‘caring’ person when Zainab is in a vulnerable situation but when that is not the case, he makes sure that he belittles and torments her every chance he gets. Instead of showing him as an abusive husband who constantly ridicules his wife, the writer has shown this side of his personality as well. There have been multiple scenes throughout which showed how desperately he wants to feel loved and needed but Zainab simply does not love him!

This recent episode set the foundations for more important twists and turns in the story in the upcoming episode. All the performances were on point and all the scenes added something important to the story. The preview of the next episode was so exciting that it will be difficult waiting another week to watch it.