Ohkay so, although this episode of Prem Gali simply showed the unsolicited advice the newly wedded couples get, it was Faiza Iftikhar’s take on showing how easy it is to create differences between the couple when the simplest of things are overanalyzed. This entire episode was more like a funny spin on how frustrating this entire setting was for both Joya & Hamza where they didn’t even get the time to understand each other but unfortunately, there were so many people around them, ready to play their part in making their marriage work.

The Advices & The Pressures

The very first conversation that Shireen had with Joya was just simple advice which every mother believes in giving it to her daughter, where she tells her to be nice to her husband, do what he likes so that she can please him, which will strengthen their bond. Although all the things Shireen said stemmed from her own fears & insecurities but then, as the episode progressed, it became evident that everyone around Hamza & Joya was trying to tell them all that they themselves couldn’t really do when they were married. In this entire episode, Shireen’s advice seemed far more realistic & decent but yes, it definitely showed how concerned she was & probably the lack of faith she probably has in her daughter because she thinks Joya is going to stuff up.

Rahat & Musarrat weren’t far behind & they too decided to share a few things with Joya, thinking it is going to help her & this is exactly what she needs. In this entire situation, Hamza & Joya have once again taken a backseat & everyone else is trying to unconsciously take the credit for nurturing their relationship, without even realizing that this is exactly what Hamza & Joya do not need at this point!

The confusion faced by Joya was beautifully elaborated by Sohai Ali Abro. She was absolutely adorable as a newly wedded Joya who had no idea what went wrong & why her beloved husband was suddenly behaving like a totally different person. Hamza failed to share anything with anyone but at least, he was trying to get to the crux of ths situation to make it figure out a way. Hamza succeeded in meeting the Peer Fraudia & he further proved Hamza’s point when he demanded a hefty amount to undo his spell! 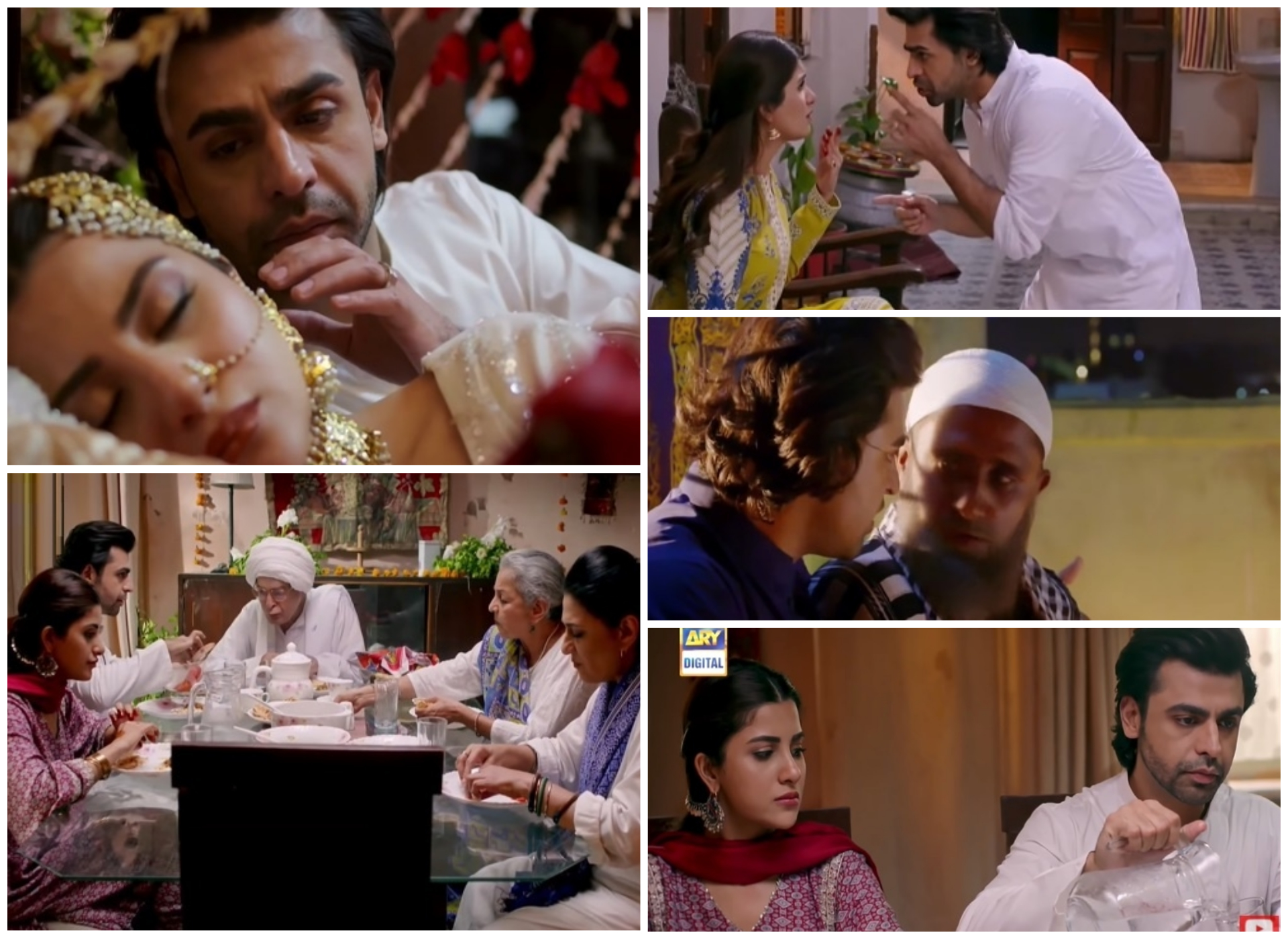 As much as it was frustrating to see how none of the family members were giving Joya & Hamza a break, it simply showed that all of it was coming from a place of love. The thing is they all are so high on emotions right now, that they really can’t comprehend that their interference is not what Hamza & Joya need. Both the families are putting so much pressure on themselves as well as the newlyweds that it is just creating one misunderstanding after another. However, Hamza’s bad behavior is definitely to be blamed because of which Joya is facing the brunt too. The conversation that Hamza & Hatim had about Farz & Sunnat was hilarious, I loved the way Hamza reminded Hatim of how easily he skips the Sunnat during prayers, therefore he was definitely in no position to speak about.

Another little moment that I liked in this episode was the conversation that Haseena had with her son Salman regarding the finances & how Fari used to make a decent amount of money to help her mother out. These kinds of simple conversations add a lot of realism & reliability to any script. It showed how Haseena was also concerned because her tenants moved to Shireen’s place & her son was not really willing to take any responsibility. Also, it showed how Fari’s marriage has changed the dynamics of Haseena’s family. It was just a very simple conversation that a mother had with her son but it turned out to be probably my only favorite moment of this episode.

A Lot More Drama On The Way

This entire episode of Prem Gali gave coverage to what the family members of Joya & Hamza were feeling. It also showcased the problems they were facing in this new setting as each other’s relatives as well as neighbors. They all have a lot of learning to do especially in regards to how they all should give Hamza & Joya a break, here’s to hoping that it might happen soon. The contribution the neighbors showed regarding the Valima, as well as the first-ever breakfast, was really cute too. Sohai Ali Abro looked absolutely gorgeous throughout the episode, therefore I ignored the thing she does with her lips while delivering her dialogues. Uzma Hassan was absolutely sweet & Saba Hameed was superb. I am definitely looking forward to the solution Hamza’s going to figure out, however the preview suggested things are going to become a lot more intense & serious. Let’s see. Please share your thoughts about this episode of Prem Gali.