After watching this episode I have a difficult time deciding which emotion was more powerful; sadness, confusion, anger, or empathy. Each one of these emotions was translated brilliantly on screen thanks to a script that continues to impress and performances which are award-worthy. I fall in love with all the characters even more with every passing episode. All these characters have been written down intelligently with the utmost clarity. All of them are layered and they can be pleasantly surprising most of the time. Tonight’s episode of Pyar Ke Sadqay yet again was meaningful and entertaining. The last scene however was not the best! Mahjabeen’s ‘good news’ was confusing as well, I only have one question how long have they been married? It seemed like Abdullah and Mahjabeen have been married only for a few days but that is clearly not the case. The story is moving forward with a steady pace and even after all these weeks the characters are still intriguing.

The fact that Mansoora derived intelligent conclusions from what Mahjabeen told her tonight was hands down the best part of this episode. Mansoora’s character is getting more interesting with every passing episode. She used to come across as gullible before but as the story is progressing it is plain to see that she is completely capable of suspecting Sarwar and trusting someone who she is only getting to know. 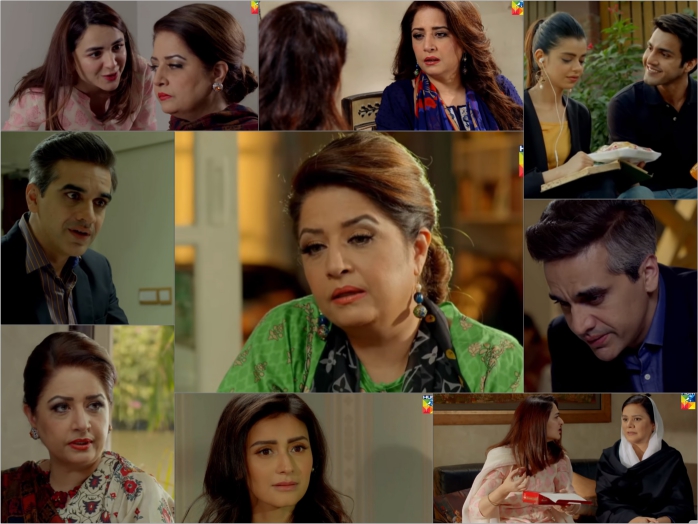 Mansoora is clearly a good judge of character but as Sarwar said in the previous episode, she is not going to confront him until she has proof. The scene covering how Mahjabeen ended up telling Mansoora that Sarwar took her out for lunch was the perfect example of an intelligent screenplay. The gradual change in Mansoora’s perception was shown superbly throughout in different scenes. She is progressively addressing all those issues which make her an ‘enabler’. Making Abdullah sit on his father’s chair was the first step and reassuring Mahjabeen that Sarwar wasn’t in charge was the second. These have been small steps in the right direction, Mansoora still has a long way to go. The conversation she had with pho was such a good way of letting the viewers know how confused and helpless she felt.

When Abdullah came back from the office looking terribly upset, Mansoora did not look worried or even surprised. This was a normal routine for her therefore she simply asked Mahjabeen to console him. Right now she isn’t as actively involved in making the much-needed changes as she should be. This is going to be a difficult path for her but it seems like eventually, she will be putting her foot down. Mahjabeen and Mansoora together can be a force to reckon with. Mahjabeen can give Abdullah the love he needs and Mansoora can give him the confidence he is clearly lacking. Atiqa Odho’s exceptional performance tonight definitely added to the appeal which this character has. Her expressions were superb in all the scenes even when there were no dialogues.

Sarwar’s dialogues and scenes tonight were equally powerful. Although Sarwar is a negative character, he isn’t plain or shallow. I find his character interesting as well. His relationship with Abdullah in particular reflects his complexes. Even though he has Abdullah under his thumb but the fact that he wasn’t born in a rich family like his step-son irks him every second. When he was talking to his mother about Mahjabeen, his main source of frustration was that she was married to Abdullah.

Also, the writer has given us a background to this character too. The way his mother brought him up has a lot to do with the person he is today. He had such a personality naturally too which was further nurtured by his mother. Omair Rana acted superbly in the scene covering Sarwar’s frustrations when he was having this conversation with his mother. Even after ‘accomplishing’ so much and being in control of virtually everyone around him, it is plain to see that Sarwar has a tough time liking himself even!

Abdullah once again tried hard to prove himself and Sarwar left no stone unturned to make him feel worthless. Sarwar knows how to shake Abdullah’s confidence and he does not get tired of making him feel useless. The manager’s character is confusing, when Abdullah came into the office it seemed like he supported him but now he is completely on Sarwar’s side. 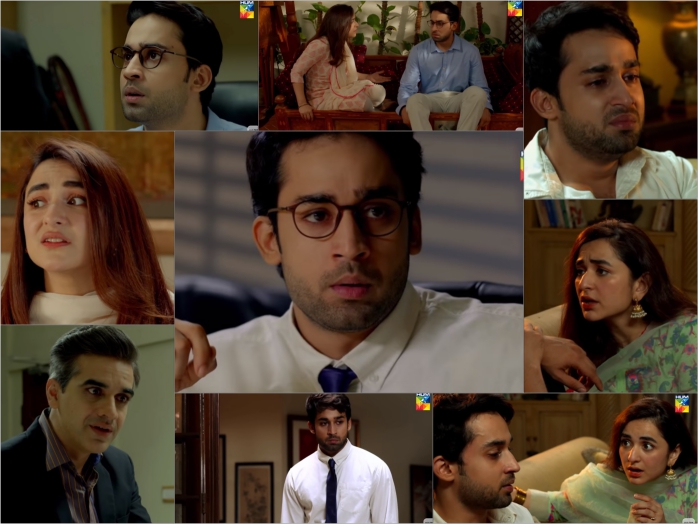 Bilal Abbas Khan’s expressions were on point when Abdullah comes back from the office but his thicker facial hair made no sense! Mahjabeen and Abdullah’s scene in the room after this was the only good scene covering this beautiful on-screen couple. Mahjabeen’s love and attention are quite likely to win Abdullah over eventually. He already likes her and he also likes the fact that there is now someone in his life who is willing to listen to all those problems which he has never discussed with anyone else.

He always defends Mahjabeen but at the same time he ends up being influenced by Sarwar even if that is the case only for a little while. Mahjabeen’s advice to Abdullah was hilarious! Their dialogues and situations have been so well written. Every time Mahjabeen asks Abdullah to take a stand for himself or she shows the desire to do something herself to give Sarwar a piece of her mind, Abdullah immediately stops her. This is such a good way to show the kind of influence Sarwar exercises on him, he cannot even imagine doing something like that.

I am not too happy with the last scene but I am hoping that this would prove to be yet another one of those incidents which bring these two closer to each other. The preview of the next episode suggested just that. Bilal Abbas Khan and Yumna Zaidi individually and as a couple is an absolute delight to watch. They translate the various shades of their characters beautifully on screen.

Although Washma got little screen time today, she still managed to leave an impact. I loved her first scene in tonight’s episode, Washma is definitely one of a kind and Srha Ashghar is so well-suited for the role.

This was another superb episode of Pyar Ke Sadqay filled with emotions, laughs, and tangible development in the story. The performances never disappoint and all the scenes add something meaningful to the story. Now that Mahjabeen knows that baray sahab doesn’t have the final say, will her approach towards him change? Will Mahjabeen help Abdullah get over his fear of Sawar? The preview of the next episode was promising. Looking forward to it.