Tonight’s episode made up for the slow-paced and disappointing episode last week. In fact, this episode of Pyar Ke Sadqay was so fast-paced that I have a difficult time believing that I got to watch everything I was waiting to see in this latest episode. It was ultimately Mansoora who decided to take a stand and be a mother for a change. Although I would have liked to see Mahjabeen being slightly more strong and active in this and the previous episode, the fact is that Mansoora’s blind love for Sarwar was the root cause of everything that has gone wrong with Abdullah’s life. This was the best way for Mansoora to redeem herself. It is however sad to watch Mahjabeen taking a backseat at the moment since she has always been the driving force. The change in Mansoora was convincing since she was giving mixed signals for quite some time now. Abdullah’s Mathematic skills were also put to good use in this episode, another development that we were all waiting to see. The question however remains, does Abdullah deserve Mahjabeen? This episode was also quite intense. Yet again, the director used the flashback scenes effectively. Some of these scenes showed the importance of Munshi ji in Abdullah’s life and those were my favorite!

The most important developments in this episode surrounded Mansoora’s character. Even though Washma told Abdullah not to share the news of the pregnancy with Mansoora, he did just that. This proved to be that one major development that changed the course of the drama. When Mansoora told Sarwar about the pregnancy, his reaction made it pretty clear that he was not happy to hear this news. Atiqa Odho’s expressions suggested that she knew that he was going to react in this manner. From there on, Mansoora was on a mission. First, she went to Mahjabeen’s house and it was her mother who told her everything. Mahjabeen’s phone call to Sarwar while Mansoora was hearing what he had to say was such a good idea since that left no room for confusion. Although, Sarwar did not say much whatever he said was enough to show that Mahjabeen was telling the truth. Since Mansoora has been so ‘blind’ for so long, even at this moment I was not expecting her to open her eyes and see things for what they were. 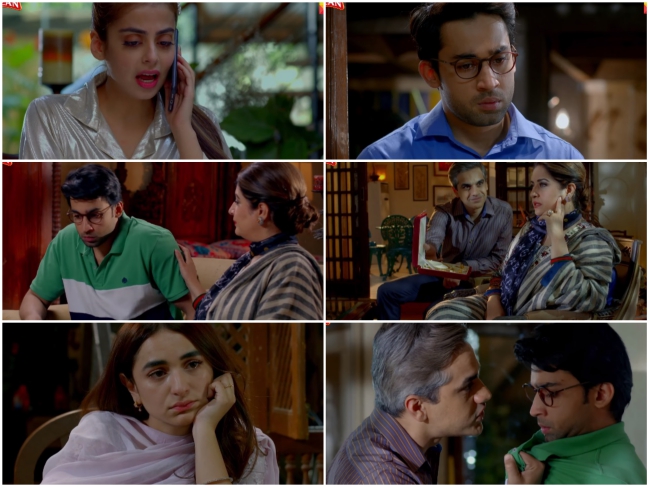 It seems like all Abdullah needed to feel more confident and in control was his mother’s support. Her conversation with Pho was so meaningful and important since it showed how difficult this was her. It also reflected her true feelings for Sarwar at the time. He did not only want Sarwar out of her life but she despised him as well and rightly so! Abdullah however stayed confused right till the last moment and sadly we did not hear him tell Shanzay that he could not go ahead with this marriage. Even when Mansoora asked him if he was happy, he was still confused! Sarwar reacted as confidently as always because he must have been thinking that Mansoora will eventually take him back. Abdullah’s inquiry and the final verdict will prove to be the final nail in the coffin. Abdullah and Mansoora both have a really good reason to feel guilty and it remains to be seen what they are willing to do in order to make up for their mistakes.

Shanzay continues to be desperate, seeking Abdullah’s attention, being insecure, and needy! This character and track have to be the most unconvincing ones we have seen in dramas lately. It is simply impossible to believe that someone like Shanzay would act this way and even if this is a reaction to the toxic relationship she just broke free from, it should have been made more clear. The way she ran to see Abdullah after Sarwar informed her that he had been quite busy lately and later on her excitement when she found out Abdullah was busy planning a surprise for her showed that she was simply obsessed with him! Was this track even needed? 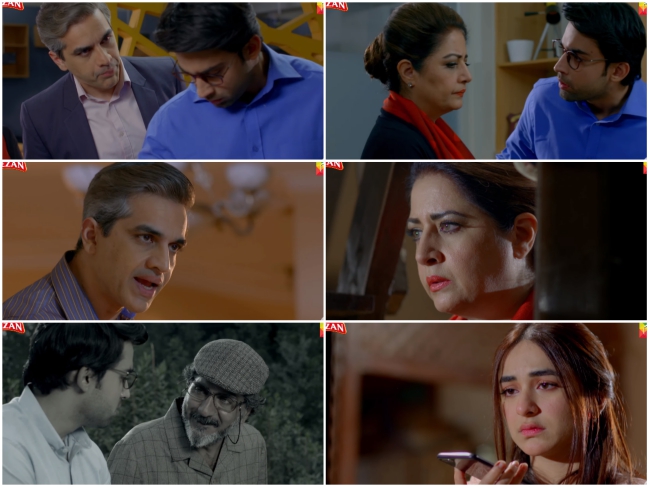 Tonight’s episode of Pyar Ke Sadqay was action-packed and powerful. Although I am really happy that Mansoora is finally going to be the mother which her children deserved and she will finally get rid of Sarwar, I am not too happy about the fact that Mahjabeen did not have a lot of dialogues in this episode. I absolutely love Mahjabeen’s character but for the past few weeks, she has lost her strong personality altogether. She clearly loves Abdullah, so much so that she thinks he is perfect but does he really deserve someone like her? For Mahjabeen’s sake, I really hope that these two get a happy ending. The preview of the next episode was really confusing! What was Sarwar doing in Mahjabeen’s house? Will Mansoora stick to her decisions? Will Abdullah be able to redeem himself? Will Abdullah’s confusion ever end? Looking forward to getting the answers to all these questions.

Bilal Abbas Khan’s performance tonight was simply upstanding, he has truly outdone himself in this one! Yumna Zaidi yet again proved that she can deliver even when she doesn’t have a lot of dialogues, her performance never ceases to impress. Atiqa Odho actually made me like and feel for Mansoora’s character tonight!