After watching Sabaat’s episode last week, I wasn’t sure if I could actually sit through another episode of this drama but tonight’s episode was better than the previous one. Even though the objectives and basic personalities of the characters more or less remain the same, there was some progress in the storyline. I still feel that Sabaat’s story overall is quite pointless, in all these weeks there has hardly been any tangible meaningful development in the story. Anaya and Hasan’s track could have taken such a positive and even inspiring turn had it been shown as the perfect union of two people who wanted the same things in life. On the contrary, the track focuses more on the problems these two have been facing ever since they got married more than anything else. Some smooth sailing for a while would have been great. On the other hand, Fareed and Miraal have unlimited wealth and they continue to exercise control. In a nutshell, tonight’s episode focused on both the married couples and showed how their relationships were progressing.

Anaya’s parents for the longest time continued to be the most heart-warming aspect of the story. I completely fell in love with their characters for obvious reasons. Anaya’s father is yet another beautiful and gentle character played by the most adorable Syed Muhammad Ahmed. Unfortunately like many other such characters played by him, it seems like this one will also die! This for me was the most disturbing development of this episode. Anaya had such close ties with her parents, their bond was extremely special yet we haven’t seen her interacting with her parents enough. Her father’s diagnosis came as a complete shock since there was no background to this. In the previous episode, he met Anaya and he seemed fine.

I am glad Anaya and Hasan’s scenes in this episode were not as disappointing as the ones we saw in the previous one. Hasan’s frustrations continue to grow and unfortunately, Miraal is still in a way running his life for him. Hasan wants to leave the job but Atif keeps on telling him not to do that because of his ulterior motives. It was good to see Anaya giving him advice like a friend and wife who had faith in him and not like a mother lecturing his son! There was more active communication between these two too unlike before. It would have been even better if once in a while they took some time out to enjoy themselves. Their life is a little too robotic and there isn’t much romance. Both of them have a job and they have each other yet most of their conversations are more practical than romantic! 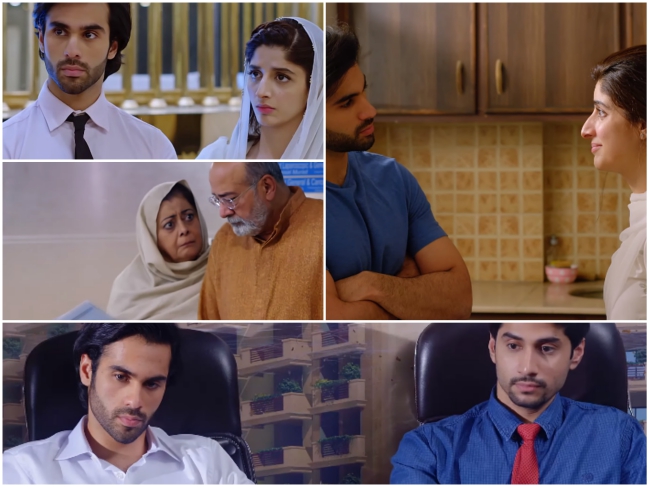 Mawra Hocane and Ameer Gillani make a cute on-screen couple. Anaya and Hasan have interesting personalities as well but the writer has definitely not added the spark needed to make this track more likable. They come across as two wise but really boring people trying to make ends meet – nothing more and nothing less! Hasan’s frustration is justified but he is not trying hard enough to find another job. Anaya on the other hand has a rewarding job and she does not have to face the challenges which Hasan is facing. Hasan was more eager to start afresh before than he is now. In my opinion, there was absolutely no need to make this track so grim since Hasan and Anaya did nothing wrong. They are not the ones who should be punished for taking a stand for themselves. The message this track is sending out is completely wrong!

The first part of Miraal and Harris’ track showed how uncomfortable Harris felt living in Miraal’s parents’ house. He also felt ‘ignored’ because his wife was too busy with her work! It was actually good to see Miraal focusing on something other than Hasan and Anaya but happiness is short-lived! As soon as Miraal found out who Hasan was working for, she was once again completely focused on getting Hasan back! This part of Miraal’s personality and this track is extremely annoying.

I am going, to be honest, and say that I am happy Miraal has started giving Harris a tough time! In my opinion, he completely deserves it since he made such a foolish choice when he decided to marry Miraal! Harris’ character is so plain and unappealing. He barely has any emotions! He is always so contained and even if something bothers him, he makes sure he does not show his actual emotions. He is clearly smitten by his wife which is the only reason why he even ignored the fact that she walked in while he was attending to his client. Miraal is getting jealous now and hopefully, soon enough Harris will see that he married a monster. Most of the time it seems like he does not know Miraal at all but he loves her nevertheless and would do anything to please her. 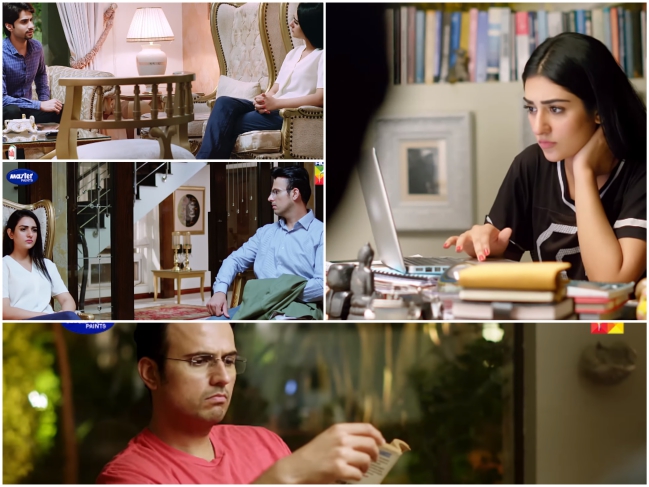 There was some much-needed progress in all the tracks in this episode which made this episode slightly interesting. Although Sabaat’s overall story so far doesn’t have a definite direction but I want to know how these tracks are taken forward in the upcoming episodes. Harris is sadly turning out to be a plain character, somewhat of a caricature. Everything that has happened in these 19 weeks could easily have been covered in 10 weeks. Sarah Khan’s dressing in this episode stood out like a sore thumb! These gowns and jackets she has been wearing in Sabaat have been the worst part of her overall look.

The preview of the next episode suggested that Harris will soon have to deal with the controlling, narcissist side of Miraal’s personality. I really hope that Atif is not able to brainwash Hasan into thinking that marrying Anaya was an unwise decision!