Sabaat continues to focus on the marital problems faced by both couples. There was a major development in the story tonight but definitely not a pleasant one. So many viewers pointed out that Sabaat was a ‘modern version’ of ARY’s Nand and after watching a few episodes of Nand, I must say that I agree with them! I must add however that Faiza Hassan’s performance in Nand is much more impressive than that of Sarah Khan in Sabaat. Also, with Nand what you see is what you get, unlike Sabaat which promised to be a meaningful dramas but turned out to be clichéd to the core. The characters in Sabaat are equally black and white. Hassan is the only character in Sabaat which isn’t all black or white but the turn this character has taken has done-to-death written all over it! We have seen jealous and controlling family members creating such misunderstandings between married couples innumerable times in dramas. Watching Hassan fall for all the lies has been extremely disappointing.

This was another episode of Sabaat which did not even have a single scene showing what is going on in Anaya’s parents’ life. The writer has conveniently sidelined all the sane characters from the story so that Hassan and Anaya in particular are left at the mercy of people like Atif and Miraal! Mawra Hocane’s performance continues to impress and I found myself feeling for Anaya a little after a long time.

Tonight’s episode opened with Hassan showing the first signs of abuse when he confronted Anaya like she was the enemy solely based on his discussions with Atif. Hassan’s insecurities and frustrations are getting the best of him and he is clearly no longer the person Anaya chose to marry. Ameer Gillani and Mawra Hocane acted brilliantly in this scene. Anaya once again chose to ignore Hassan’s behavior. It would have been good if Anaya put her foot down for a change but the writer is bent on showing that she has the patience of a saint! I don’t see this as a positive trait especially because before she got married she was completely capable of finding a solution to her problems. Instead of questioning Hassan’s behavior and making him realize that he is wrong, Anaya continued trying to act as if nothing had happened. She no longer talks to her friends or even herself therefore we have no way of knowing what she is thinking and how she manages to stay so positive. I like Anaya’s positive nature and her practical approach but sometimes her reactions can be really difficult to relate to. She is a little too forgiving at times and the way she bounces back is unreal. 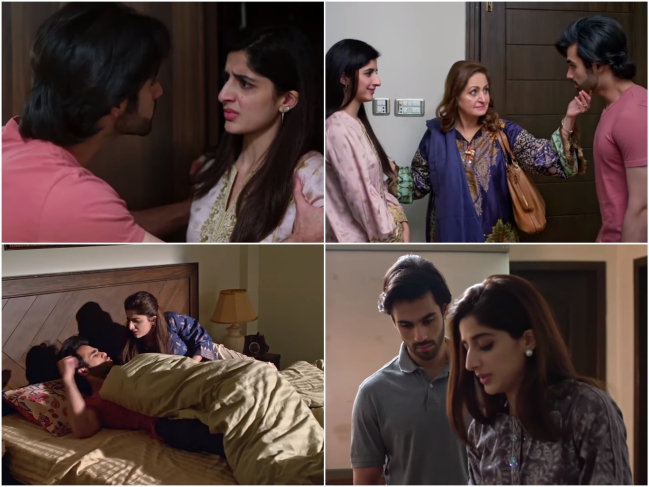 The scene showing Hassan stressing out about his future and his frustrations made perfect sense. However, like someone else pointed out earlier, he can easily start working online again. Right now it seems like Hassan is too immature and gullible to be living on his own. While Anaya is a strong and positive person, Hassan is continuously complaining and worrying about things that are not in his control. The only takeaway from this track is that overprotected rich boys should not get married until they are mature enough to make wise decisions. When Anaya and Hassan moved out of the house, I thought that this was going to be the beginning of a healthy relationship but these two have been facing continuous problems ever since they moved out and what makes the situation worse is that Miraal is behind all this.

Just like Anaya, Harris is also doing whatever he can to make his spouse happy but he is also a ‘meesna’. Miraal has absolutely no respect for Harris’ feelings or decisions. Since he is a man, he managed to find a way out and decided to do what he wanted to. This track is also really slow since it took Harris so much time to do what he wants! He won’t even get away with it as Miraal will find out that he is practicing again in the upcoming episode. Miraal and Harris’ track is literally putting me to sleep! Harris is a bigger caricature than Anaya since his response to everything is the same. Usman Mukhtar seems to be bored with his character too therefore his performance is just as plain as the character itself. 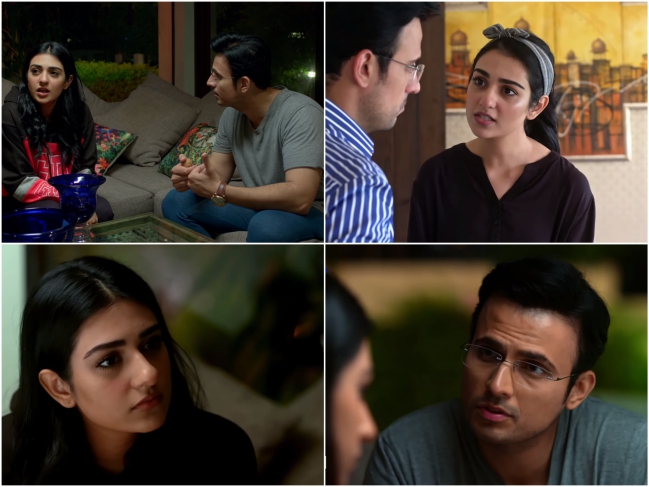 Nothing is pleasing about Miraal getting what she wants. We have been watching her have her way right from the first episode, it’s about time that we get to see some change in her character and track. The character doesn’t have many layers and all of Miraal’s scenes are more or less the same.

Hassan turning into the typical shukki husband was the worst part of this episode. The story it seems is finally moving forward and I really hope that they don’t stretch this drama further. Harris continues to make one stupid decision after the other without thinking about the repercussions.