This episode had quite a few important developments to its credit and it had a lot of scenes which were deep and meaningful. For the first time the viewers saw Sammi as a strong woman who was there for someone else for a change even though it is very difficult for someone in her position to see beyond her own problems. These scenes in which Sammi asked Salar to go back to his mother and later on was there for him when he was upset also showed that Sammi had accepted her fate, she knew she will be taken away at some point and no one will be able to help her then. The fact that Sammi does not want Salar to save her shows that she is strong enough to face whatever is coming her way alone. Since this drama is titled Sammi therefore the viewers automatically expected Sammi’s character and story to be the central part of the drama but I have to say that at this point all the tracks are equally important. All the female characters in the drama are equally interesting and each one of them is fighting their own battle. Mawra Hocane still does not look or speak like someone who has lived in a remote village. She has an innocent face which makes you feel for Sammi, otherwise the whole get-up could have been far better. Ahad Raza Mir is a powerful actor but his hairstyle is terribly distracting.

Salima’s reaction was surprising but easy to connect to!! Salima felt threatened and the only way for her to feel “secure” was to get pregnant again hoping this time she will have a son. All those lies she told Rashid about how she told Naheed off and the way she flirted with him showed this was her way of showing that she was in control! At the end of the day, she is putting her life in danger in order to please her husband. Saman Ansari has nailed her character as Salima right from the get-go. Adnan Siddiqui’s outlook and acting both are brilliant. Seemi Raheel is also doing a fabulous job, her performance in the scene in which her character was begging the chaudhry to forgive her son was remarkable. I have to say however that chaudhry barks more than he bites! He beat Rashid up but then he sent him back home, it would have been so much better if he kept him there and made him suffer. Chaudhry seems like a ruthless man and people like him don’t think a lot before killing someone. Madiha Rizvi’s character has to be one of my most favorite characters because she is the only woman in this drama who actually does something to take control even when the odds are against her. 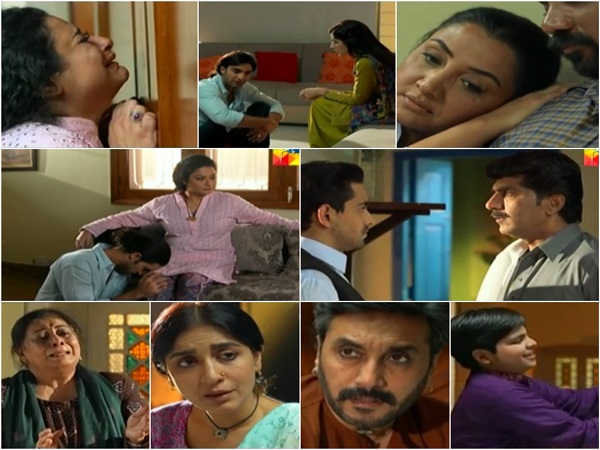 Naheed’s track took an interesting turn with this episode and the best thing about this track was Aalyan taking a stand for Naheed. Although Naheed is educated and she has a job but her brother wants her to live her life according to the rules made by him. I would love to see her living life on her terms and conditions. Naheed’s character is another one which is brilliantly etched-out and Nadia Afghan is doing complete justice to it. I also really like Bilal Khan’s performance in the play, whoever chose him to play with role made a very wise choice.

Chote Chaudhry’s dialogues are always amusing and they also carry a very strong message. He says only what he has been taught by his father and what he has learned by watching everything that happens around him. For him, the world is divided between two kinds of people; people who are rich and those who are poor. The rich of course rule the poor and they are superior in every way possible. No wonder such children grow up to be Chaudhrys who exploit the poor and can’t even feel for them the way one human would for another. The writer has used chote chaudhry’s character effectively to give some very important messages and to make people understand where this mindset comes from.

Chandni continued to be insecure and stubborn in this episode but I have a feeling that her character will take a surprising turn in the upcoming episodes. Haris Waheed is another actor who is bound to make it big in the industry because his entire focus is on his performance and he has proved himself as a versatile actor. There are very few actors who start their careers with roles which have tons of room for performance. The preview of the next episode was exciting, looking forward to how the story unfolds from here on.