This episode had a lot of important developments to its credit and quite a few scenes which were very touching. Also, like all the previous episodes of Sammi this one too was packed with some powerful and positive messages. All the characters in this drama have come a long way, this change has been shown gradually and realistically. Aalyan played a major role in changing the way Sammi had been handling her situation so far. Rashid has always been shown as someone who was quite capable of feeling for people around him therefore watching him regret everything he had done and trying to help Sammi in some way did not come as a surprise. So far the main motivation behind Zulekha’s actions has been to ensure that Chaudhry does not get married to Sammi but the preview of the next episode suggested that Chandni might be able to bring about a change in her way of thinking too.

Right from the beginning the writer had made it quite clear that all the characters in this drama are in their respective situations mainly because of their mental barriers. Although most of them are quite capable of breaking free from the shackles of the system and those people who do not let them live a life on their own terms and conditions, but they do not even attempt to do things differently. Sammi did something tonight which was brand new for her, she decided to speak up for herself. Although there isn’t much she can do practically to change her situation right now but the fact is that if she decides to stand up for herself, the Chaudhry will automatically lose his grip on her. Right now, Chaudhry Nawaz is very conscious about his “reputation” which is why in the previous episode he asked Zulekha to cover up for him when the press questions him about his actions regarding Sammi therefore there is a good reason why Sammi’s newfound confidence will be a big hurdle in the way of his plans. 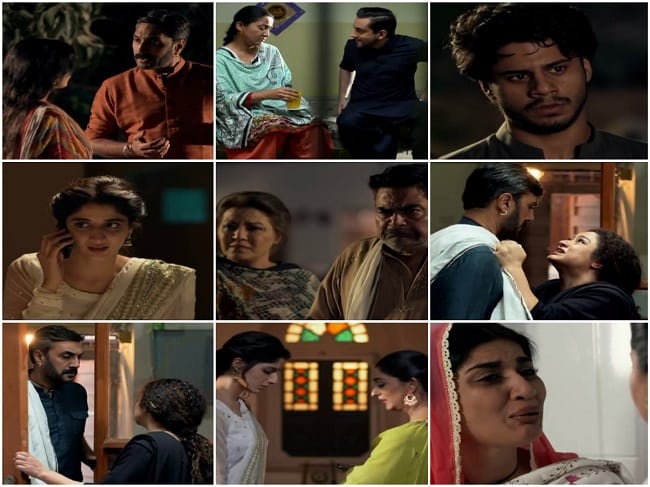 The scene which covered Sammi’s meeting with her family was written beautifully. Sammi had very little time to get her message across and she definitely managed to give her father and brother something to think about. Even though Mawra’s outlook, just like always, proved to be a big distraction but even then that scene was very impactful. My most favorite part of this episode however was Rashid’s track and the turn it has taken. The change in Rashid’s personality and the way he stood there holding the gun to make sure that Sammi’s family listened to her showed he was on Sammi’s side now. Rashid’s meeting with Chandni was also extremely emotional. The dialogues, the performances and the way this scene was directed was very impressive.

Aalyan has always played a positive role throughout, right from the get-go he was introduced as someone who wasn’t afraid of anyone and someone who chose his battles wisely and fought hard to win them with logic and reasoning. His support saved his phupo’s life, his words brought about a major change in Sammi and he has made a big difference by changing the mindset the chota chaudhry was raised with. His character shows how one person can be the torchbearer of change. Naheed’s conversation with Aalyan was also beautifully penned down and executed flawlessly. Love how all these wonderful actors have completely transformed themselves to fit into their respective roles.

Naheed and Salima’s scene in the hospital was another impactful scene of this episode. I am waiting to see a change in Salima’s character. Even though Rashid assured her that he did not want a son but Salima is convinced that only a son can open the door of happiness for her family.

This was another well put together episode of Sammi which had a lot to offer. The preview of the next episode was very enticing as well.

How many of you watched tonight’s episode. Do share your thoughts about it.