Ohkay so, the writing of Mustafa Afridi, the direction of Saife Hassan & the production of Momina Duraid; Sang e Mah began with a bang. The very first episode was enough to promise a gripping storyline with some very interesting & never-seen-before type of characters. The thing I found most noticeable was how the team created a completely different ambiance that didn’t even for a second remind me of Sang e Marmar, although there were so many notable actors who have been a part of both the projects. The first episode set a perfect foundation for what is yet to come & I can not wait to see each of these characters & their journeys.

Haji Marjan Khan (Nauman Ejaz) & Zarsanga (Samiya Mumtaz) are parents of Hilmand (Atif Aslam) & Hikmat (Zaviyar Noman). Hikmat being the youngest & probably the well-loved child has a very simple approach & perspective towards life. However, the eldest Hilmand is aloof to the world around him & doesn’t shy away from letting others know where he stands & what his approach is. Marjan being one of the reputable members of the tribe has a say in the matters concerning their tribesmen, whereas the only person he has zero control over happens to be his own son Hilmand. It was interesting to note how both Marjan & Hilmand stood against each other where Marjan found himself losing in front of his son. 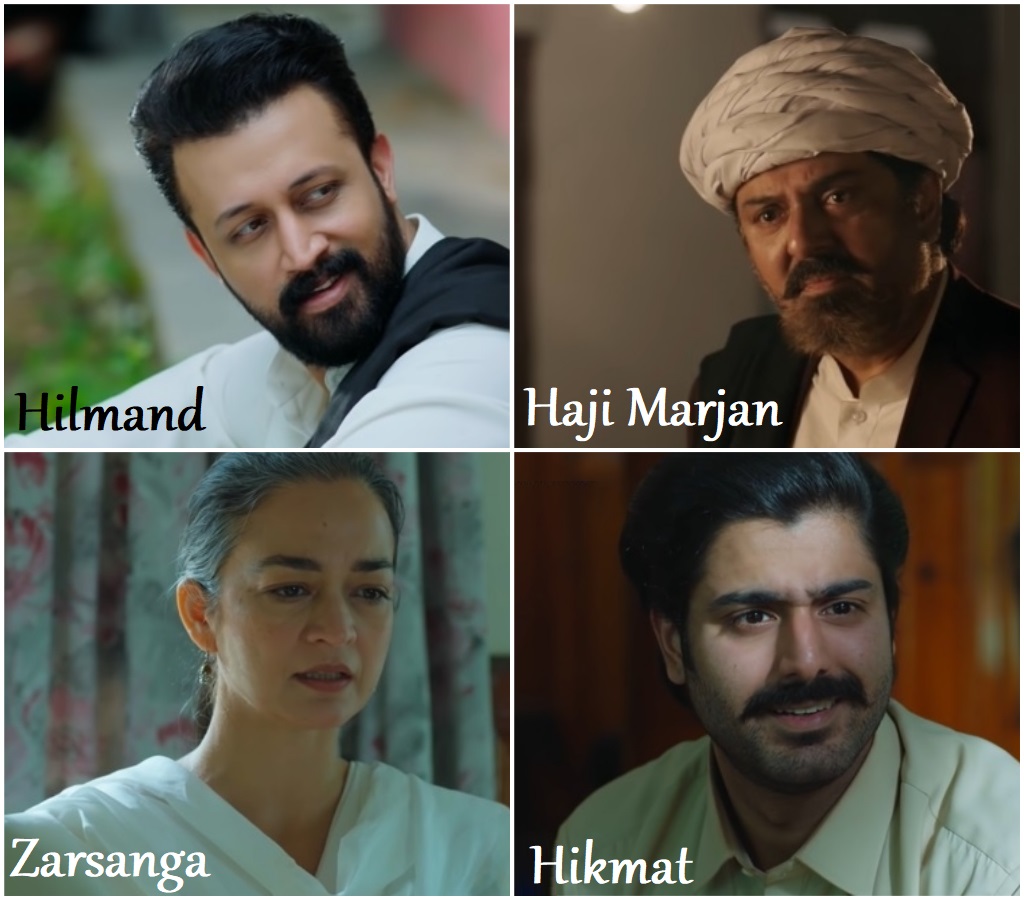 Zarghona (Sania Saeed) has denounced her tribe & has been living life her way. She is a single parent of Gulmeena (Hania Amir) who happens to be in love with her cousin Hikmat. Zarghona & her sister Zarsanga are not on talking terms anymore. Although Gulmeena & Hikmat do think they can get married, Zarghona has made it very clear that it can never happen. Hikmat & Gulmeena’s interactions were some of the highlights of this episode which showed how two people in love can not see things any other way. Hikmat’s relationship with his mother was shown beautifully where he always brings out the child in his mother who on the other hand has very staunch views & belief system. Zarghona also has an assistant Badam Gul (Hassan Noman), who obviously will have a very strong role to play in the story. The brief introduction that he got showed that he was capable of so much more & definitely knows his tribe really well.

We also got introduced to Harshali (Najiba Faiz) & her fiance (Omair Rana), they both belong to the Sikh community & despite being engaged for 20 years, they still have not gotten married. Harshali is still waiting for him but he has been involved in self-inflicted punishment where he has turned a blind eye towards any happiness that may come his way. Their introduction was brief but enough to pique interest in what their story is & how it will be linked to the tribe of Marjan Khan. 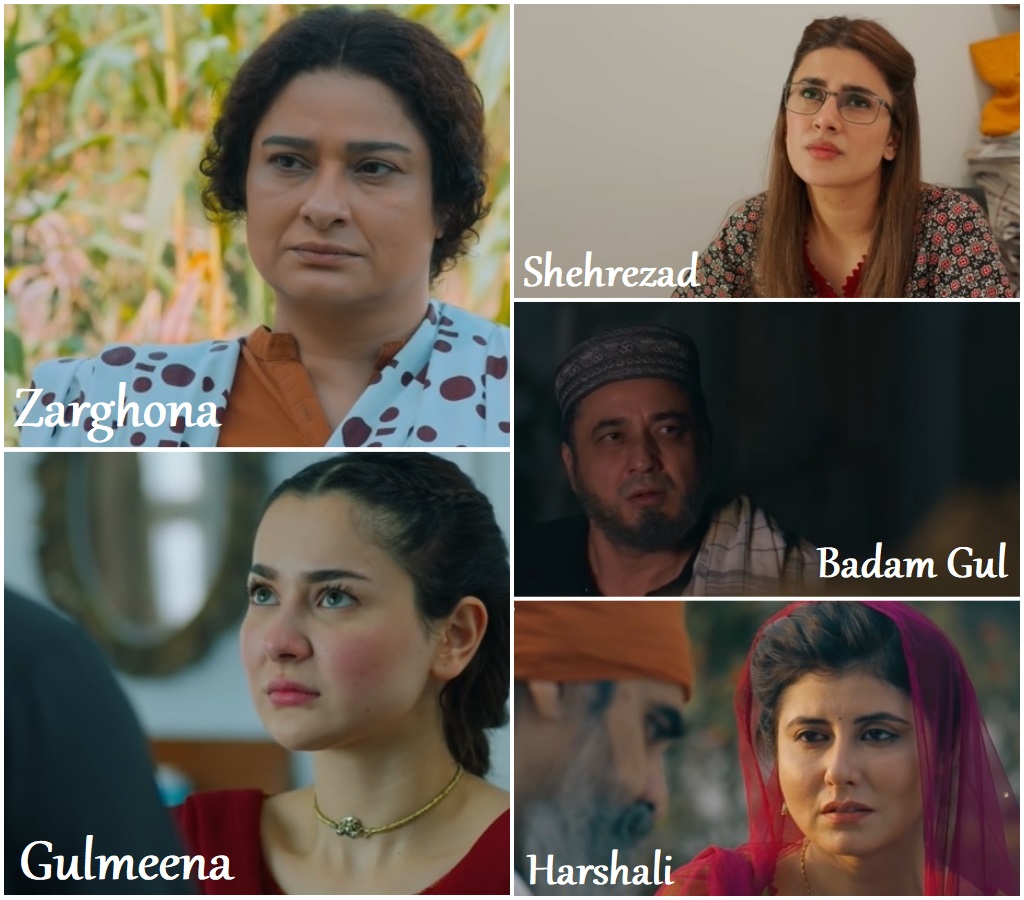 The first episode also started a conversation about the concept of Gagh, which is deemed punishable in the current times. Gagh is something that a guy does when he likes a girl. He fires bullets outside the vicinity of that girl to let everyone know that she belongs to him & that no one should even think about getting married to her. Currently, Sabz Ali committed Gagh apparently when he was intoxicated & the jirga is now going to decide his fate. I found Zarsangha’s take on this entire matter quite grave & extreme. That was a peek into the kind of person she was & how her mind worked. In the first look, who would’ve thought that Zarsangha could think on such lengths but the things she said related to Gagh not shocked Marjan Khan but also showed that these emotions were erupting from a wound she herself has probably endured. The note at which the episode ended where Hikmat casually spoke about Gagh to claim Gulmeena very clearly laid a foundation of what the future holds for this family.

Well well well, talking about Hilmand Khan; undoubtedly he is going to be a very interesting character to see & explore. The layers that he has were barely touched upon in this episode but were enough to make me look forward to his journey. His dialogues were written beautifully & showed the kind of deep thinker, poetic & philosophical Hilmand was. No wonder why he finds himself detached from the circus around him & finds solace in the silence of the graveyard. While watching this episode & a few scenes of Hilmand, all I could think of was how beautifully this grand character was written just for Atif Aslam. The kind of character Hilmand is, it had to be portrayed by someone with this kind of aura, uniqueness & screen presence. Atif Aslam has portrayed Hilmand effortlessly & I could also see some of his own personality reflected in this character. 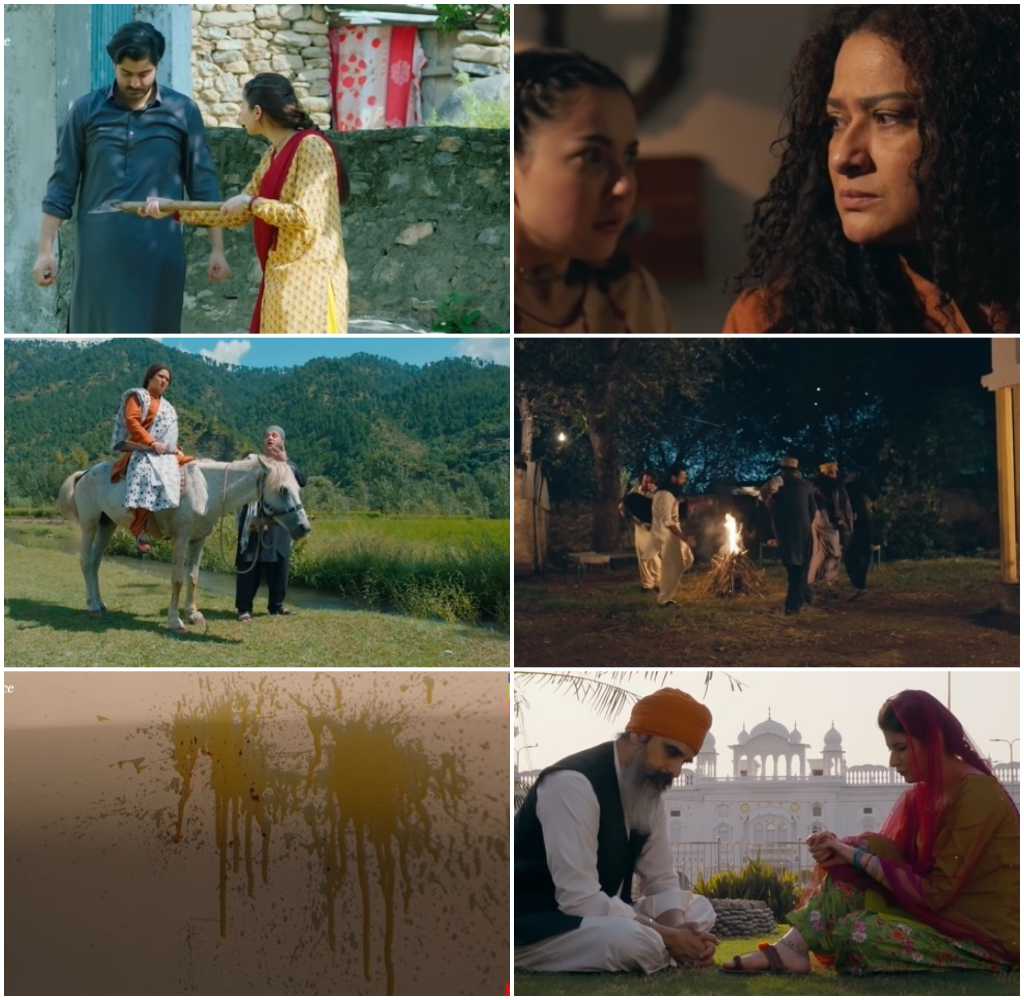 The first episode of Sang e Mah was full of surprises. I loved seeing Omair Rana & Najiba Faiz in one frame yet again, they both made a lovely pair in Sang e Marmar too. Kubra Khan’s entry as a journalist was a good surprise too. For me, the highlight of this entire episode was the insight that was given into Zarsangha’s character, which was beautifully portrayed by Samiya Mumtaz. The change in her tone, her expressions, the anger & all the emotions that she felt while talking about Sabz Ali who committed Gagh was phenomenal. Nauman Ejaz was mesmerizing with his strong screen presence. I really liked how Zaviyar Noman & Hania Amir created the chemistry of Hikmat & Gulmeena on screen. They both actually looked really nice with each other. Sania Saeed’s aura & screen presence was on another level in this drama as Zarghona. Atif Aslam’s performance was spellbinding & I loved all the dialogues that were written for his character.

Sang e Mah’s very first episode has laid a solid foundation for the rest of the episodes. The Pukhtoon culture was brought to life on screen seamlessly. I actually felt like I was moved into another world where they all existed, it was really powerful. I must commend Hania Amir for doing justice to the Pushto accent throughout the episode. Zaviyar Noman tried his best too & it was a decent effort. No one does Pushto accent like Hassan Noman, that’s a done deal. I think the fact that Atif Aslam decided not to sport an accent gave him a grip over his performance. Considering this was his debut drama & very first on-screen appearance, it was the right decision on his part to not take up the accent which otherwise would’ve limited him from performing to the fullest. I could already see the actors struggling to keep up with the accent, therefore, seeing it not coming from Atif Aslam was a relief, otherwise, it would’ve left the audience distracted too.

The very first episode of Sang e Mah was well-directed. I loved the way they created the ambiance & brought it all to life. I loved Zarghona’s house & its interiors, it was simple but beautiful. It won’t be wrong to say that Atif Aslam was the star of the first episode & the entire cast gave power-packed performances. Production value, attention to detail & the overall execution was top-notch as well. Sang e Mah has had a great start & I can not wait to watch the rest of the drama. Please share your thoughts about the very first episode of Sang e Mah.