“Bewafau ko wafadari ka tana de kr rokne wale taqatwar nahi hote.” There was a great deal of emphasis on bewafai in this episode and I especially liked the way Siraj uncle explained how sometimes being “friends” was a convenient option for men who didn’t want to make a commitment but also wanted a woman to be a part of their lives. The viewers also saw a different side of Lubna’s character in this episode which was quite likeable. Although Dariya’s character was special in its own way but Lubna too seems like someone who has a lot in common with Faris and she is also someone who has learned to be strong. Both Faris and Lubna know what it feels like to love someone who does not give you their hundred percent and they also know how it feels like to be cheated. Just like every other episode of Tau Dil Ka Kya Hua this one too was directed brilliantly. Hajra Yamin played her role really well especially tonight even though there were so many dialogues which were rather tricky but she nailed every single one of them. The manner in which Lubna asked Faris if she could be his friend was also refreshing and cute. The pause after her request was also timed perfectly.

All of a sudden Saif is more interested in Lubna than he ever was before perhaps because he knows that she is no longer dying to be with him. Saif’s friend’s dialogues about Karma and how ultimately everyone pays for cheating on someone who loved them truly were few of the best dialogues in this episode. Zoya’s reaction was surprising and it showed that she did feel attracted towards Faris if nothing else. Tipu’s character has taken an interesting turn, his expressions when the court marriage was taking place and later on clearly indicated that he had a bigger plan in his mind. He wasn’t doing this only to make Zoya jealous and to make sure that Faris and Maya get back together, I am waiting to find out what exactly he is planning. Maya’s character is completely different from all the other female characters in the play. She isn’t strong or assertive and she keeps on making wrong decisions. Why has she assumed that Faris will accept her when she goes back to him? A lot of what Maya does is a reaction of what is happening around her or she lets other people talk her into taking the most extreme steps. Imran Ashraf played his role exceptionally well in tonight’s episode. Tipu is the perfect meesna! 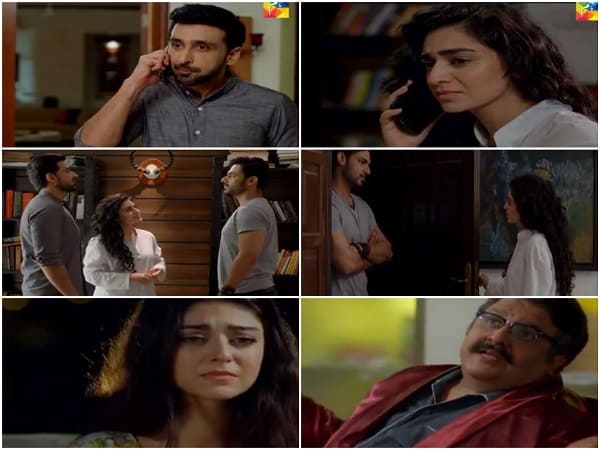 This episode had so many meaningful and powerful scenes to its credit. Lubna, Saif and Faris’ scene, Siraj Uncle’s emotional conversation with Lubna and whatever Saif’s friend said to him were few such conversations which were brilliantly written. I also really liked how Faris explained why he didn’t stop Maya. There were a lot of dialogues in tonight’s episode which also pointed out the double standards in our society when it came to men and women’s priorities and actions while they are in a relationship with someone. I truly appreciate the fact that the writer has written about those aspects of relationships which are usually brushed under the carpet in our dramas because they are considered too bold or unusual therefore they don’t always click with the masses. We need a drama like Tau Dil Ka Kya Hua every now and then which does not sugarcoat anything. Rehan Sheikh and Sami Khan’s scenes together are always a treat to watch. Both these actors are phenomenal performers and they share an amazing on-screen chemistry. We still don’t know much about Siraj Uncle’s background or even his relationship with Faris.

The director Shahid Shafat has directed every single episode of this drama flawlessly. The locations, camera angles and the background score give Tau Dil Ka Kya Hua a different and more appealing feel.

How many of you watched this episode? Don’t forget to share your favorite dialogues from tonight’s episode in the comments section.