Drama serial Titlee continues to be interesting, although the story doesn’t have anything grand to offer but even then the overall treatment given to the play makes it one of the most entertaining plays this season. Naila’s character is that of an egoistic girl who likes to have things her way. She exploits, lies and bullies to get what she wants; these tactics have worked for her all her life therefore she probably did not learn to deal with different situations she faces in any other way. The fact that her attitude with people who are more likely to listen to her and are easy to bully is completely different goes to show that if she didn’t have so many “nice” people around her like Zara and Ahmed and his parents and a mother who has always been her biggest supporter, she wouldn’t have been the person she is today. Naila always argues with her mother, her sister and even her husband and she almost always gets her way but when her father or brother ask her to do something, she usually lies to have her way or has to go along with their wishes. This was sole reason why she got married to Ahmed. I must confess that even with all her flaws, somehow I do blame her father and brother too for marrying her off with someone she did not like. She is not the kind of girl who would have adjusted thinking that she had to make this marriage work therefore they shouldn’t have married her off to someone she did not like. 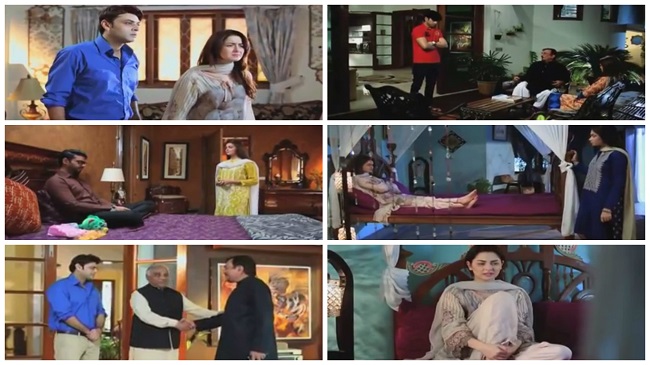 Apart from being controlling Naila also thinks she deserves all the “perks” which come with marrying a rich guy even though she does not have an ounce of respect for him. This pompous, entitled attitude is another reason why Naila just cannot see why she should behave any other way! I see Naila as someone who is more naive than anything else, she needs to learn a few important lessons in life, the most important one being that you don’t get everything on a plate! She will at some point learn this when she loses all these people and even things which she takes for granted. I am definitely waiting to see if the viewers get to see such a change in Naila’s attitude.

The only scene in tonight’s episode which was slightly over-dramatic was the one in which Ahmed’s mother called to “talk” to Amna! While Ahmed’s mother’s emotions at that time were understandable, showing Zara crying was like taking it a bit too far! Otherwise this episode was right on point and fast paced as usual. Love love love Hania Amir’s acting and Ali Abbas is turning out to be a personal favorite. They definitely elevate the overall impact their characters have on the viewers and make this drama worth watching.

The preview of the next episode showed Ahmed telling his father about Naila’s ‘shert’ and Naila’s brother will probably find out that she was lying! Can’t wait to see what happens next week!