Ohkay so, Zidd; writing of Bee Gul, direction of Adnan Wai Qureshi & production of Momina Duraid has hit our TV screens tonight. To be honest, by the end of the very first episode, I wouldn’t say that I am thrilled to see this drama but I would definitely say that I am keen to find out how things are going to work & how the story will unfold, so for this, I am definitely giving the team of Zidd a benefit of doubt because it’s just a start & right now, they may have not given us much to discuss but I am sure the story will get interesting because a lot of characters have yet to make their appearance in the drama. The very first episode doesn’t give you much apart from an insight into Maya Ali’s character but I am sure as the story will progress, we’ll get to see more shades of her.

So, the story began at the note where Akbar (Kanwar Arsalan) & Saman (Maya Ali) are engaged to be married in 15 days but have serious compatiblility issues. They both are brusque, headstrong, opinionated & most of all short-tempered in nature. Akbar obviously loves his fiancée but that can’t be said about Saman who is as a very practical person & makes decisions after thinking things through. Saman doesn’t believe in compromises because of which she dreads getting committed in a long term marital relation because she knows, this relation will demand compromises from her & she isn’t mentally ready to do that for Akbar at least. Saman, at first might come across as a hasty decision maker but she is much more farsighted than she might seem to be. Saman can clearly see that they both won’t have a smooth relation because they both don’t share a mental wavelength & are not compatible at all. Akbar on the other hand might be short tempered but he certainly is flexible & likes to make Saman happy because of which even after she throws a hissy fit of postponing the wedding followed by calling off the engagement, he still finds a way to convince her by agreeing to her demand. 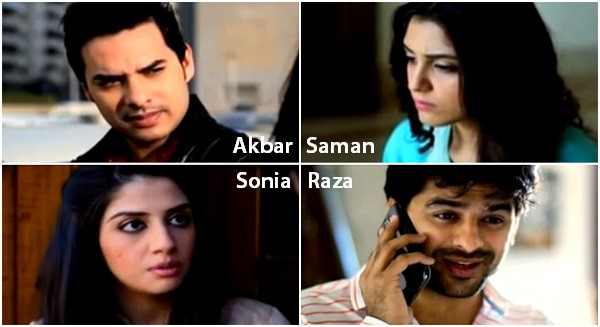 Hell breaks loose in Saman & Akbar’s homes when they find out about the new decision that Saman has made & expects everyone to agree to it. Akbar clearly wasn’t the one who chose Saman for himself but he got engaged to her after his parents selected her for him & later he fell in love with her. The reactions of both their parents seemed realistic where one couple was furious & the other was worried due to the unexpected turn of events. Saman clearly feels that no one really understands her & knows what she wants. She feels that she doesn’t get the support she expects from her family but it’s only her father (Manzoor Qureshi) who knows how to tackle her but after a certain extent, he seems helpless in front of his daughter too because of her stubbornness. 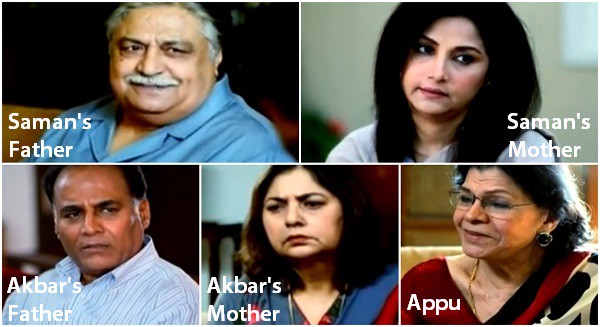 In the whole fiasco the guy who seems relaxed or rather indifferent is Saman’s brother Raza (Humayun Ashraf) because he knows that it was one of those days where his sister is out of control but the very next day she would understand what she did was wrong & everything will get back to normal. Raza is happily engaged to Sonia (Hina Javed) whom he loves to bits & they both share a very cordial relation in comparison to Saman & Akbar, who are still having doubts about marrying each other 2 weeks before their wedding is scheduled.

Saman’s Aunt Appu (Sultana Zafar) shows up expecting to see a lot of happening in the shadi wala ghar but what she encounters is something she never expected. Somehow Saman does agree to get married to Akbar half-heartedly but still the way she participates in the preps shows she still doesn’t want this marriage to happen. It takes one more argument for Saman to decide inevitably that she can’t get married to Akbar as they will face nothing but problems if they both get married & this time around Akbar gives in too because he seems tired of having the same argument over & over again.

So, this is what the first episode of Zidd was all about. I feel the pace of the episode could’ve been a bit better but seems like they will take some time in revealing everything so for that, it’s acceptable. Direction was good & so was the screenplay & I also felt that the characters have been written in detail because you instantly get an insight into their nature. It goes without saying that HUM’s production value has always been great & visually the drama was appeasing to see. I also like the title song sung by Hadiqa Kiyani (if I ain’t mistaken). All the actors did their job well but I am interested to find out more about Saman’s character. I am sure there will come a time & such a person in her life for whom she will be ready to do everything including what she loathes the most & that is; compromise. Share your thoughts about the first episode of Zidd please.