Most often when you watch award shows you are bound to forward a few bits here and there because they tend to be boring otherwise. I remember forwarding a lot of dance performances in particular in the past few award shows which I watched mainly because of the fact that watching Pakistani stars dance on Indian music in a Pakistani award show was actually extremely disappointing. Well, that was most certainly not the case this time. Pakistani film music of all kinds was highlighted in the performances. Overall, the way the whole affair was conducted was absolutely phenomenal. Great camera work, perfect editing, good hosting, a very intelligent script and impressive performances by everyone involved made this whole show the best one I have seen so far. There were few weaknesses here and there but since the show as a whole was a success therefore one can easily ignore these shortcomings.

The Stage was beautifully set up and captured brilliantly by the cameraman as well. The floor and the lighting on the roof stood out more than anything else but I must say that the screens in the background could have been put to even better use had the different nominations categories been displayed on it while the awards were being given. Although the nominations are announced and shown on screen before the award is given but displaying the category in the background makes the whole presentation even better. 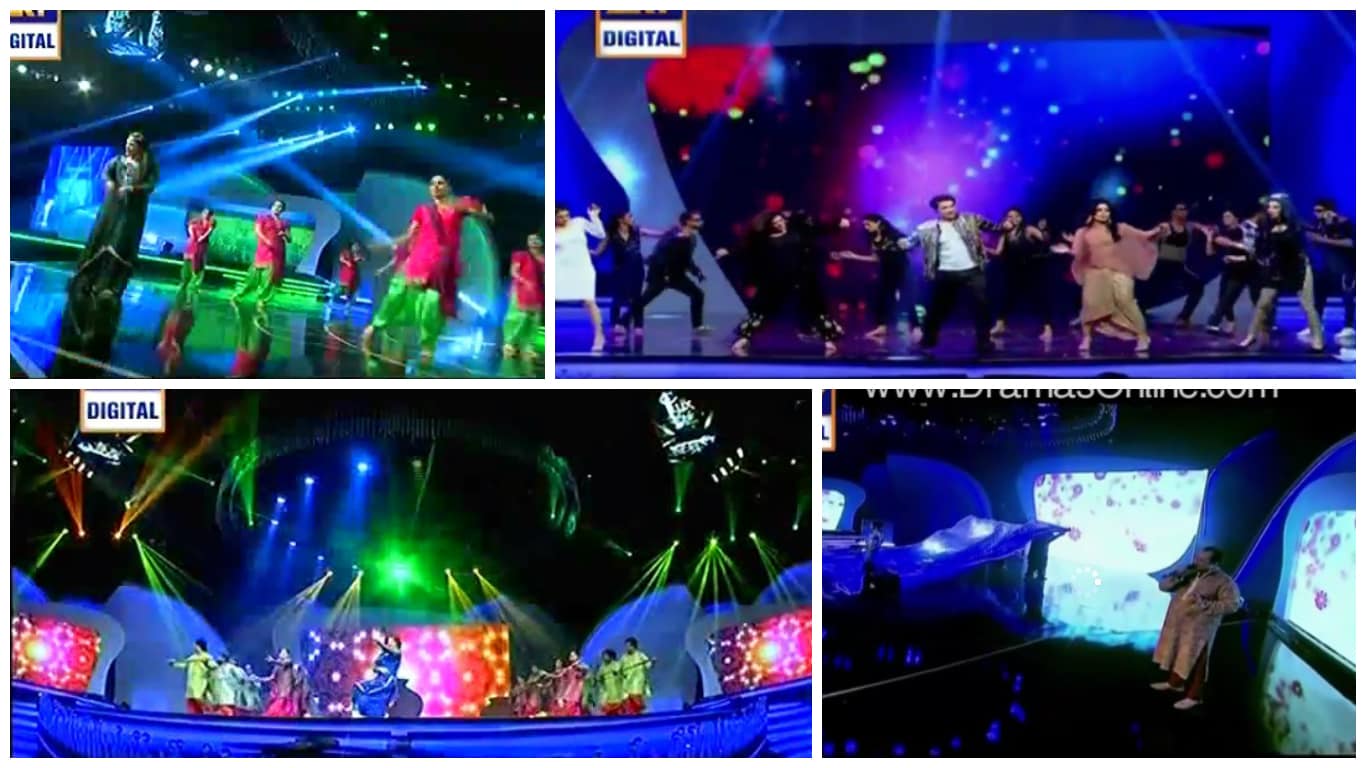 The show was hosted by Mahira Khan and Fawad Khan with Yasir Hussain adding his own comic element to it. Like all the hosts at these award shows Mahira Khan and Fawad Khan obviously had to stick to their script and they did so with great confidence but I felt like Fawad Khan was too stiff at times and he could have smiled a little more. I have no idea why our hosts have to stick to English while hosting these shows. Although Fawad and Mahira both are very fluent in the language but even then when they make it look like they have to put in an effort to speak Urdu it isn’t impressive but it is disappointing. Mahira Khan looked beautiful but her hair needed a little more styling. 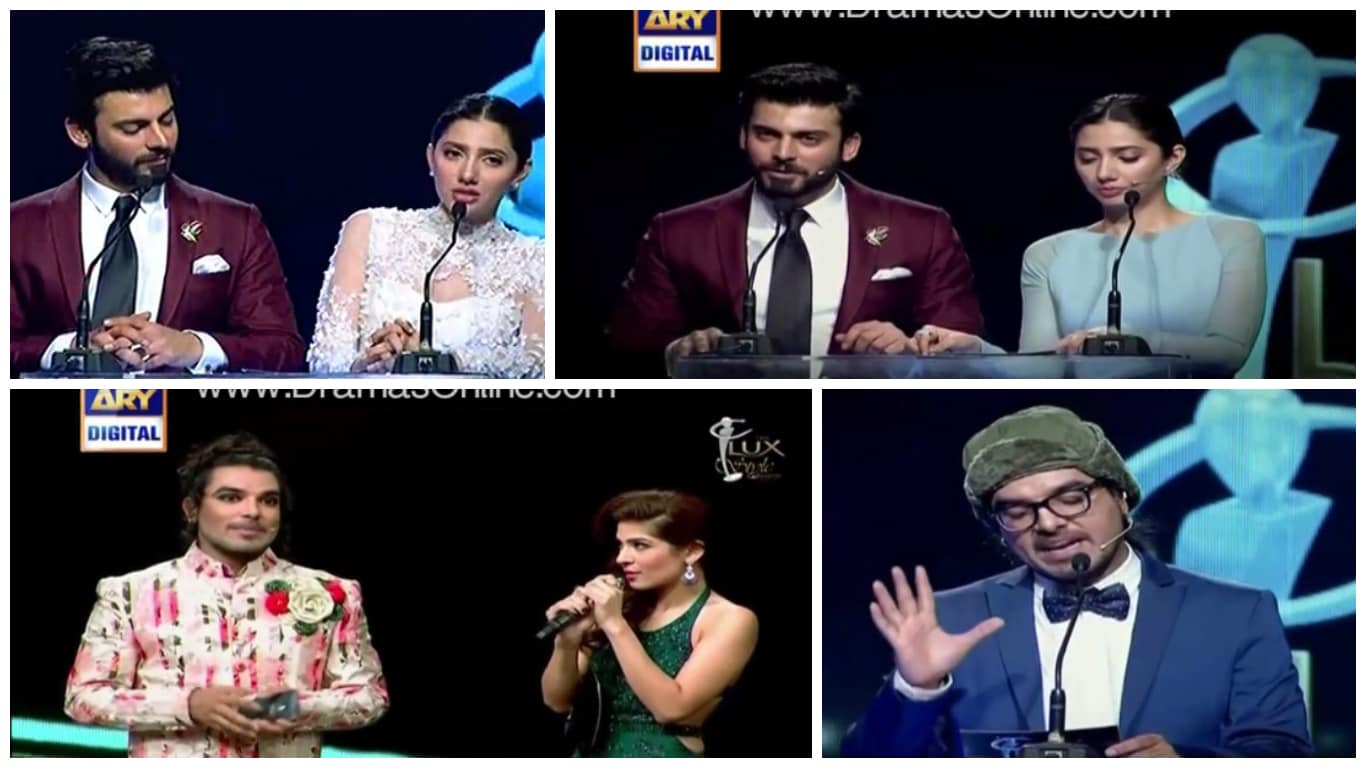 While Fawad and Mahira played their part to the best of their capabilities, it was Yasir Hussain’s jokes and the way he presented them on the stage which were the highlight of this award show. Unlike Ahmed Butt and Vasay Chaudhry he covered practically every celebrity and controversy without overdoing it. The camera man deserves special credit for capturing the reactions by all the celebrities while Yasir Hussain was cutting jokes about them.

The Script And The Camera Work

The script was to-the-point and definitely very creative, especially the jokes. Unlike all the past award shows and every other talk show Hamayun Saeed was not targeted for his flirtatious nature but for something entirely different. The jokes about Ijaz Aslam, Umair Jaswal and everyone involved were absolutely spot on. These jokes will be the main reason why I will be watching this show one more time. Usually there are few people who are the target of the jokes in these shows but the way everyone was ‘covered’ was absolutely refreshing and hilarious. 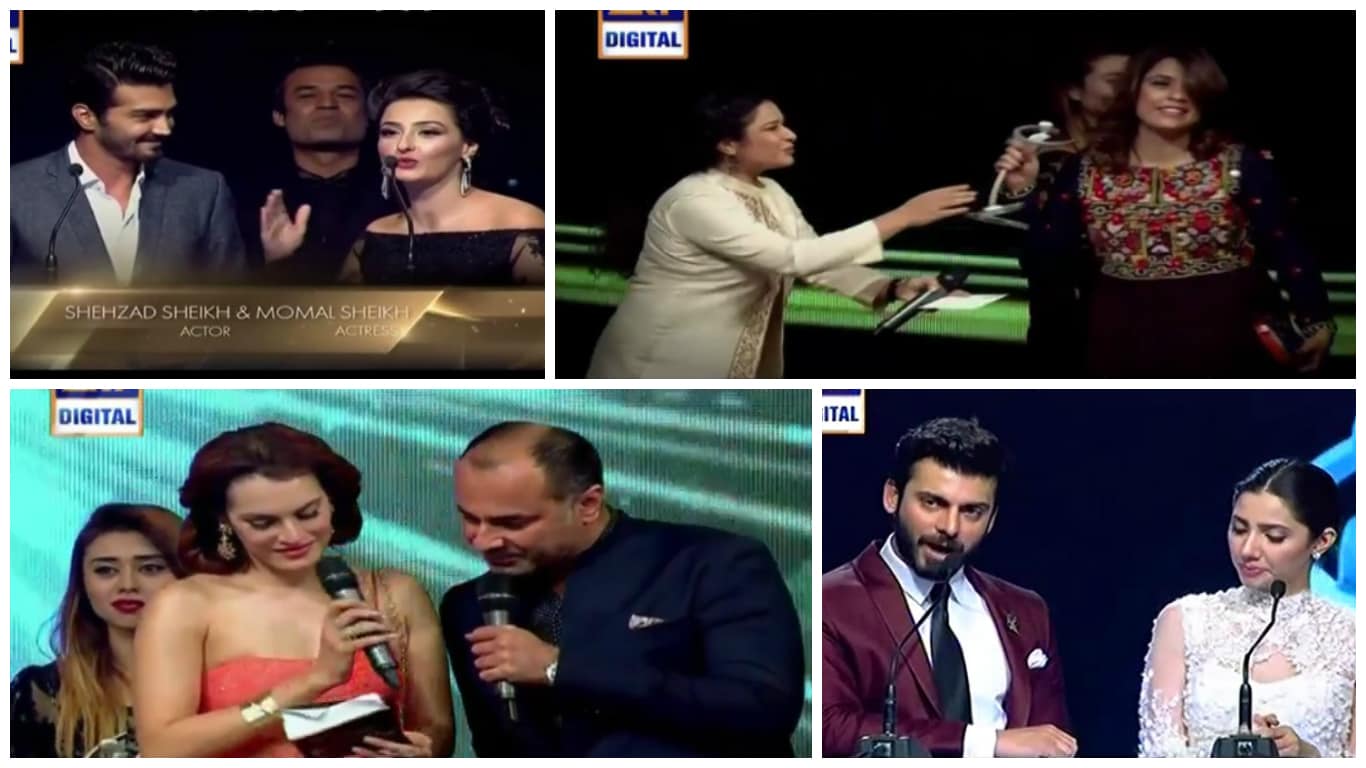 The way the camera crew covered reactions from the audience and the dance performances from different angles was absolutely brilliant.

I must say that I was pleasantly surprised to watch the performances on Pakistani songs unlike the last time. While Ayesha Omar, Urwa Hocane and Amna Illyas’ performance were decent enough. The highlight of the show was the tribute paid to Ali Zafar in particular; the choice of songs, the singers and the performance by the man himself was brilliantly choreographed, captured and performed. Uzair Jaswal, Jimmy Khan, Sara Haider and Farhan saeed gave stellar performances. 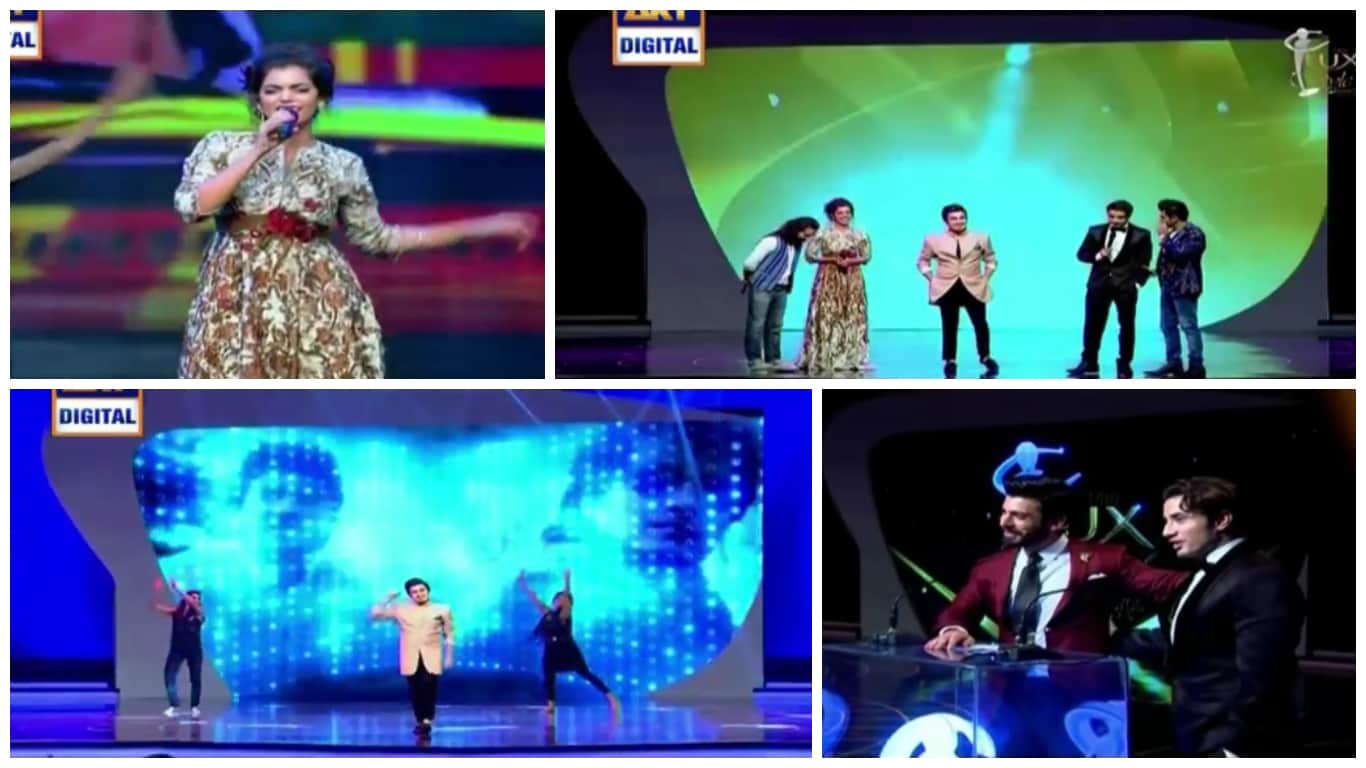 The tribute to Rahat Fateh Ali was the best way to end the show. The performances included a lot of celebrities from different fields of showbiz and the presence of Rahat Fateh Ali himself was a great addition to the presentation. 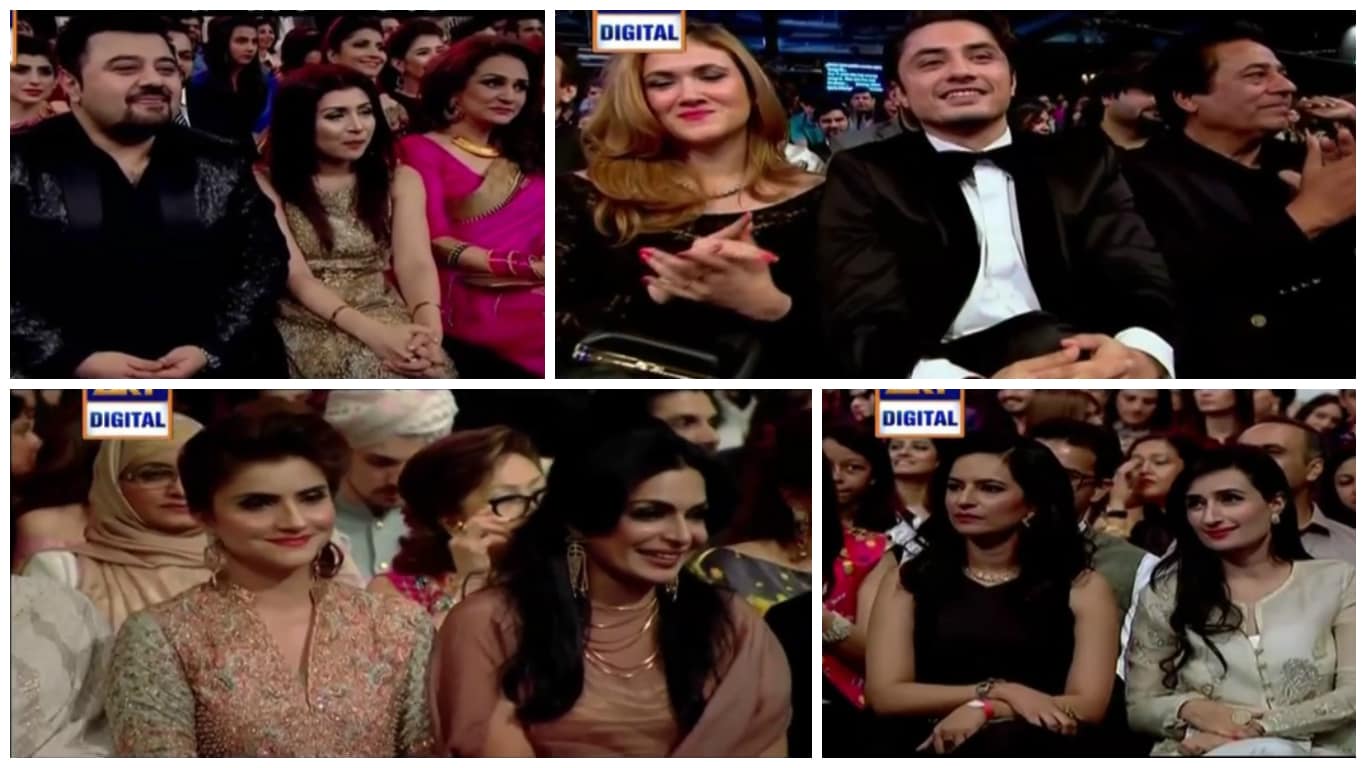 The way the progress of the Pakistani cinema was highlighted in this award show was a great way to pay tribute to all those people who have contributed to the revival of Pakistani cinema. This award show would have been picture perfect if our hosts spoke a few lines in Urdu as well. While Yasir Hussain’s jokes were in Urdu, Fawad, Mahira and all those people who got the awards and were giving them seemed to be duty bound to speak English which is actually unfair with a lot of people who I am certain would feel much more comfortable speaking Urdu.

Since there were a lot of positive aspects to this show and only a few which need to be improved therefore this show was clearly a huge success. A very entertaining show as a whole which deserves to be appreciated.