We have all, at some point in our lives, been forced to face palm, whether it’s the stupidity of others, or ours that makeS us do it. Following is a list of five such moments whose credit goes to our television screens:

1. When morning shows have “dramas”:

Shadis, calling upon jinnat or trying to have discussions with “real” saas bahus, I would term them as dramas. Morning shows
have given me so many facepalm moments that I have lost count. I gave up on them a long time ago, but since they air 5 days a week, while scrolling through channels, catching a few scenes is inevitable. But seldom do they capture my interest. Most of the
time they make me cringe.

Give up on these fake shadis already. Why are they hell bent on getting people married? If you really want to earn sawab
by getting girls married then do it in private instead of dhol dhamaka and an official ailaan. Other than that, what is the point of
getting already married couples married again? For the second time, having not only a baaraat but a mehndi, mayon and the kind of
rasoomat that no person of this country has even heard of, is illogical. 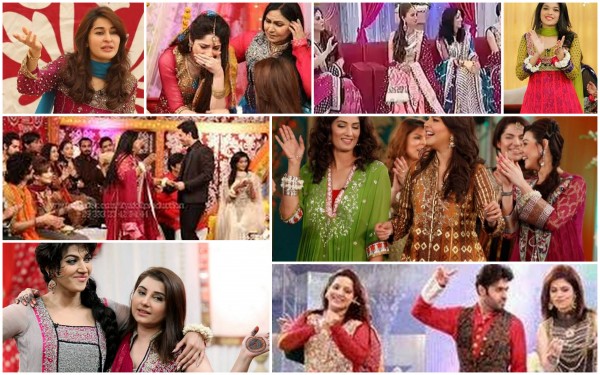 If real jinnat ever got to these guys, do you really think they will let the cameramen record their videos and show them to the world? I think using this topic to get ratings is wrong and no sane person would fall for this cheap tactic.

The morning show hosts will make your marital life a bliss by calling you and your saas live on television and let the whole world see what crap you two are going through together (just so they can know that their lives aren’t as messed up as yours and be happy)!
Who believes these people?

2. When the weddings in dramas just don’t end:
Mayu and Mehndi(with ALL the dance scenes) , Baraat and Valima and then angoothi dhoondna and doodh pilana and sheesha dekhna.….
The list goes on, and the weddings go on,thus the scenes get dragged. All that changes are the wedding dresses!! Do we need to see every wedding function of the characters? Since they are filler scenes used to drag the already lame dramas for a few episodes, we can skip them.
The examples are endless. Raheel’s (Sohail Sameer) Mehndi function in Tum Mere hi rehna lasted for three episodes. Abrish
(Sonya Hussain) and Farhad’s (Junaid Khan) wedding functions in Khuda Na Karey wasted a lot of time. The wedding functions of
Aahista Aahista, Muhabbat Subh Ka Sitara Hai, Dil Nahi Manta, Ladon Mein Pali, Rasam, Rukhsati need to be mentioned here.
The “6-7 sisters” dramas annoy me the most. Every sister’s wedding functions are shown separately (Like one wasn’t enough!).
Mein Bushra is a recent example. 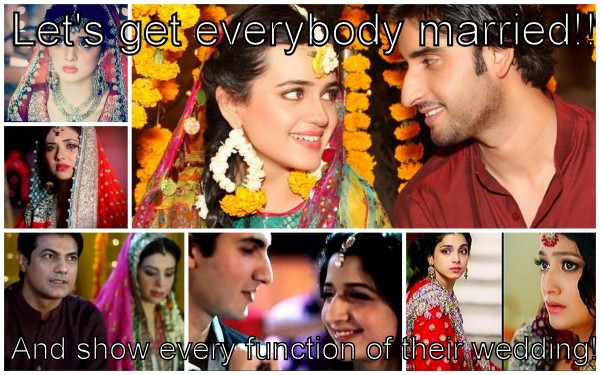 3. When the most boring drama is nowhere near ending:

You’d expect, in fact pray that the most boring drama on-air will have the least number of episodes but when, even after the 20th or 25th episode there is no sign of it’s end and the twists are still happening, you have no choice but to wonder…….

4. When everything is solved at the last moment:

We, the viewers, put our heart with the characters. We love some of them, and hate some of them. Whom we hate, we want punished. Unfortunately we don’t get to see the evil ones suffering for more than one scene. The apologies they present to the good ones are just words of formality. In the end, we see the hero (who’s most probably the apologist), and heroine sharing an intimate moment. There can be two reactions to this:

a) a sarcastic cute

b) an urge to punch

5. When talk show fights go out of hand:
I do watch talk shows, whenever I find the topic interesting. But the acha khasa topic is ruined by the verbal abuse the “guests” shower upon each other. There is a huge difference between educated politicians and illiterate people. Setting a good example for the people, eh? Done on purpose or not, this is wrong and should be stopped.

What makes you facepalm? Do tell us and share your thoughts about the article in the comments.