Ohkay so, this episode of Balaa was alright. I seriously dread as I can foresee things becoming monotonous & one-dimensional henceforth. Even though the fact has been established that Nigar is evil & she will break Taimoor’s family apart, I still wish there’s more to it than seeing the entire family becoming victim to Nigar & her evilness.

Nigar & Taimoor got married & right from the beginning where Taimoor relied on the truth & let Nigar know what his family means to him, Nigar started relying on lies to drift him apart from those he loves.

I wish Shama wasn’t this simple minded or she was not so forgiving for her own disadvantage. Even though Batool has clearly said that she doesn’t want to get married to Junaid, Shama still couldn’t find the courage to let Zafar know clearly that Batool has rejected Junaid’s proposal. To be honest, seeing Shama feeling bad for how Nigar turned her into a culprit in front of Taimoor didn’t make me feel bad for her because firstly, she was the one who deemed Nigar as the only & most suitable option for Taimoor & secondly, she has spent a life time with Zafar as well as Nigar to know how cunning they both are, so why was she now feeling bad as if Nigar did something that was not in-line with her nature? Even when Taimoor spoke about Nigar in the initial episodes, he was pretty clear about her that she only spewed venom every time she opened her mouth so how & most importantly why did Shama assume that Nigar must have changed. Taimoor can obviously be mistaken because Nigar is actually making it look like she genuinely cares for Taumoor’s family but then again, I wish Taimoor was a bit alert too as he himself was well aware of the mindset Nigar had before their marriage, so to expect her to change overnight is not anyone else’s but his & Shama’s own mistake. 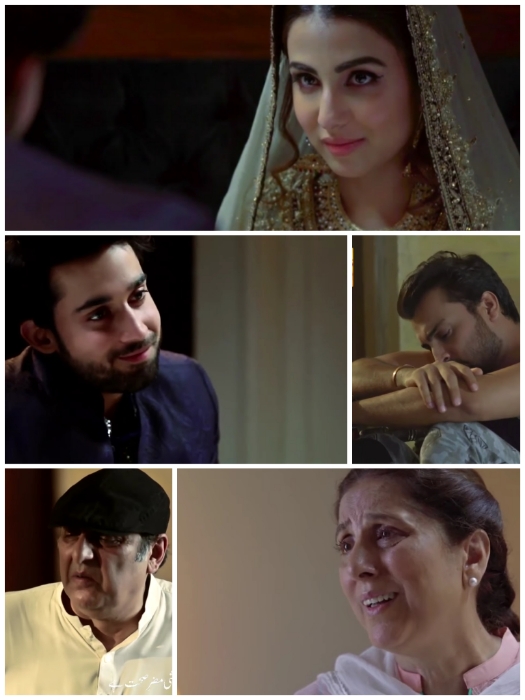 Shama felt bad for the way Zafar insulted her & the way Nigar made her awkward. Everything else was okay but I guess Shama should have gotten a bit alert after Nigar told her to maintain a distance from her own son? Yes, Shama is nice & all but then, she knows Zafar in & out, she has seen Nigar grow in front of her eyes too so how come she just accepted everything that Nigar said & started maintaining a distance from Taimoor? To be honest, things would have been a bit more interesting if people in Taimoor’s family were a bit sharp & alert too because now it seems Nigar is winning & she will continue to do so because her opponents are not even in the race as they are too simple rather blind to see her manipulation & plotting.

Junaid has pretty much lost his senses, obviously what he has gone through is not something that one could get over easily but unfortunately, it is his father & sister, two closest relations who have ruined his life & they are not even taking the responsibility.

I wish there was more to Nigar, like yes her character has been written & portrayed intelligently but seeing her making an issue over petty things like breakfast, Taimoor spending time with his mother & sisters, Taimoor getting jewellery for Shama, Batool sharing things with Taimoor made it all very very typical & been-there-seen-that kind of a scenario. Let’s see if things will change or will continue to be this way in the future episodes of Balaa.

Overall, this episode of Balaa wasn’t that bad but then everything that I saw wasn’t new either. I am actually dreading that things will now become typically one-dimensional with Nigar doing what she wants to & no one judging or questioning her ways. I hope the writer does not make the story too one-sided & shows some sort of efforts from Taimoor’s side too where they try to outbid Nigar as well. Let’s see how things roll. Please share your thoughts about this episode of Balaa.