Hmm, what can I say? While this episode started off on a positive and warm note, Azra’s tantrum and then the events that followed threw me off a bit. Also the introduction of the new neighbour who has her sights set on Urwah made me sigh in exasperation. The summer holidays finally came to an end and it was time for Urwah to return. Ameena seems to have fallen in love with her husband and I was given the impression that Urwah too had developed feelings for her, the way he is shown to be thinking of her when he heads back to university.

Last week when I saw the promo for this week I had seriously thought Azra’s ‘attack’ on Urwah was just a dream, correction, nightmare. Turns out I was wrong. The whole time that scene played I kept waiting for Urwah to jerk out of his reverie but seems like Azra’s patience had been tested and although I had not been prepared for that side of Azra, it appears neither was Urwah for he blurted out the truth about his marriage, as he explains to Sohail later ‘mein darr gaya tha’. You were not the only one, Urwah! 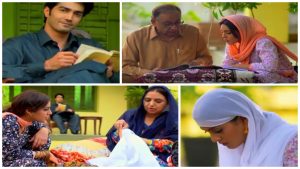 Azra – respect! She has taken her leave gracefully enough and realized that there is nothing to be gained by chasing after a married man. With Azra out of the picture and the warm, fuzzy relationship that seemed to be brewing between Ameena and Urwah I thought things will get better between the two. But this is what I mean when I say I was thrown off a bit for the timeline henceforth confuses me. Urwah’s parents are shown to be discussing that Urwah has not been home for a year and given how they also talk about how things are a bit hard financially, I could still understand him not going back home for a year. But Sohail later says to Urwah that it’s been two years since Azra left so really how much time has passed?

Ameena, although misses Urwah, has taken things in stride and is busy with her studying and helping around the house. I liked how Urwah’s parents have not taken her for granted and feel bad that she is ‘stuck’ with them while Urwah is away. Sohail was totally spot on when he said to Urwah that he does not understand him at times for neither do I, especially with this new request of not telling anyone at the factory compound that he is married. Why in the world not?! Also, the way he was so short with Ameena on the phone and her reaction made me feel really bad for her. If Urwah knows and accepts that Azra has no place in his life which is what he says to Sohail then how about learning to believe in that and move on?

And then this new neighbour, uff! A vailum vaili young woman with nothing to do but eye her neighbour and cook food for him and find ways to get close to him. I hope Urwah tells her about his marriage soon or as next week’s episode preview shows his parents decide to send Ameena to live with him. I would rather she show up and sort things out herself rather than meesna Urwah begin to lose his heart to another girl! 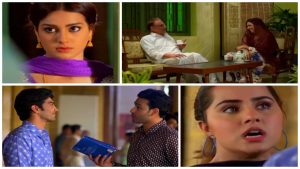 Given how this drama has shown itself to be different, I am seriously banking on that for the ‘desperate new woman in the man’s life’ scenario to not develop. Or for it to be nipped in the bud quickly! I know some of us really like Sohail and although I was not a huge fan I liked his acting today and also how he has shown to be a friend, helping Urwah out and being embarrassed when he tries to thank him. Iqra Aziz was flawless today. I know I end up praising her each week and believe me, I was actually fed up of seeing her in most dramas, especially since I was reviewing most of them so I am genuinely impressed by her portrayal of Ameena that makes me look forward to her scenes. Her confusion over Urwah’s short attitude with her on the phone, her emotions when he is leaving, when she tells him shyly she knows now of how to speak to her shohar, the sudden shake of her head when she is studying and finds her thoughts wandering, the green chapals, LOL totally spot on.

The music that plays in the background like when Ameena is shown to be settling in or when Ameena and Urwah are moving along with their lives is a very pleasant tune and compliments the general good feel of this drama. I hope Ameena and Urwah meet very soon again!  What did you all think of this episode? Would love to hear your thoughts.