Mohsin Abbas and Asif Raza Mir’s award-winning performances completely stole the show tonight. Mohsin Abbas has given an overwhelmingly solid performance especially for someone who is making his debut in dramas with a character which is not exactly conventional. Arman’s character is simple but Mohsin Abbas has made it so likeable that you feel an instant connection with Arman. The way this character has been translated on screen is a testimony to the fact that an outstanding performance can elevate the screen presence and value of a character. Asif Raza Mir is another actor who is simply flawless. He acts so naturally and effectively that you actually look forward to his scenes. The director Ali Hassan and the director of photography deserve tons of credit for shooting every single scene beautifully. My favorite scene in tonight’s episode was the one in which Mehmood sahab hits his son, I felt for Arman instantly and that slap was so real! Everything about this scene was perfect; acting and timing. Apart from Shaheen Khan who plays the role of Arman’s mother, all the other actors are giving performances which are subtle yet impactful. Kubra Khan’s expressions and body language were the best part of her performance especially in tonight’s episode but I felt like her dialogue delivery was somewhat rushed in few scenes. I am glad that Pareesa’s background story will be revealed in the next episode because the viewers need to know what happened to her.

Tonight’s episode opened with Mehmood sahab going back home. He confronted his son only after his wife went to sleep probably because his wife is already not very fond of Shehnaz therefore he did not want to give her another reason to hate her!! The chemistry between Mohsin Abbas and Asif Raza Mir and their impressive performances made all their scenes a treat to watch. Arman is a simple yet intelligent boy who right now needs a job and is focusing on starting a career more than anything else. He did not invite all this trouble and now that he is in this situation, he feels completely helpless. His conversation with his mother and sister about his proposals also indicated that he is not the kind of person who will be willing to play second fiddle to his wife. The situation which is being shown in Muqabil is unlike any other we have seen so far, apart from Dil-e-Muztar I don’t remember another drama in which a girl insisted on getting married to a man this openly. In this drama the case is completely different of course. 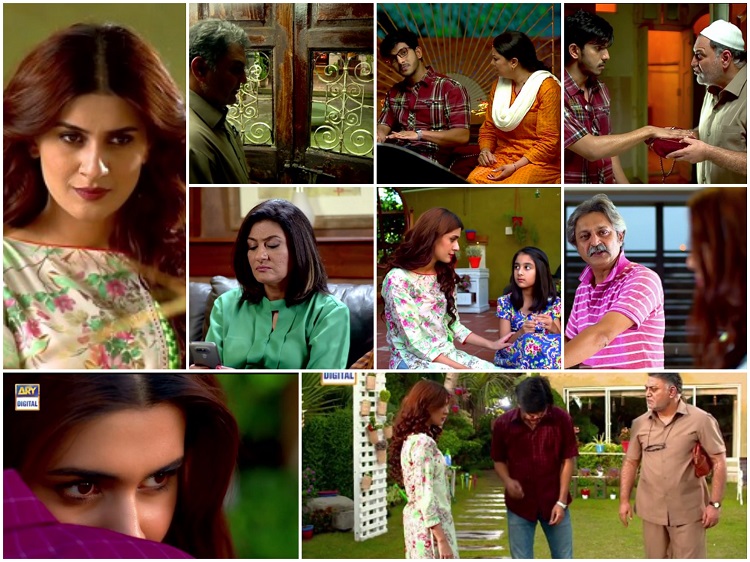 The fact that Pareesa did not back off but made a move which was even more extreme than before when Arman told her what effect her actions had on his father and Shehnaz, went to show that she wants to make these people suffer and she isn’t really “sorry” for anything. This was a meaningful scene which showed that Pareesa was most certainly not following her mother but she wanted to hurt her. Also, Pareesa’s conversation with her father revealed the dynamics between Shehnaz and Aftab. Shehnaz married Aftab because she did not have a choice and she wanted to marry someone she could dictate to all her life. Shehnaz is a controlling woman and Aftab it seems does not really “respect” his wife but he is a prisoner in this relationship. I also liked the novelty in Shehnaz’s way of “investigating” Arman.

The preview of the next episode will reveal the reason behind Pareesa’s decision and will show another side of Mehmood sahab’s character. I am waiting to find out how this particular aspect of the story is covered. Tonight’s episode of Muqabil was a treat to watch. Muqabil is extremely enticing and has some outstanding performances to its credit. So far, the story, the circumstances, the conversations and the locations give the drama a different feel.