So while I enjoyed watching this episode, I am not too thrilled at the note it ended on. Urwah showed that he does have a compassionate side, actually let me rephrase that, for as Sohail rightly points out Urwah has shown his ‘khidmat guzaar’ side quite often but only to women he is not related to! Anyway, all the fuss I created last week over him being quite oblivious and cruel about taking care of his wife seems to have had some effect on him (haha) for he seemed to show a nicer side to Ameena. I like how she finally showed that she had had enough and gave him some attitude. I like Ameena’s personality, she is who she is and does not try to waste time in pretences. She was furious with Urwah but when he started talking to her she was okay although she did make it clear that she had had enough of his constant scolding.

The consequences of Ameena’s visit to the milad in the opposite ‘bai-lock’ were hilarious. I did kind of see where this was going when the woman questioned Ameena at the milad but the actual scene where she asks for her rishta and Ameena’s and Urwah’s expressions were priceless. Iqra Aziz and Shahzad Sheikh’s acting in that scene was flawless and really made me laugh.

Ameena, poor thing is often put down for being uneducated and while she may not be as ‘educated’ as Urwah may have preferred she is not jaahil and more interestingly, has quite a way with words. The way she questioned Urwah’s reaction to the rishta scene and likened it to how she may feel was interesting and on point. It also seemed that it struck a chord with Urwah but then I guess not.

Saiqa – what is her game plan I wondered? Until she pretty much spelled it all out. Itni desperation to ensnare Urwah. Taubah. Saiqa is seriously in a league of her own. It is sweet to see how Sohail has taken to Ameena and tries to knock some sense into Urwah’s head but all that seems to do is cause further damage. Urwah’s stuffy existence has begun to bother me. His sermons over how he should be nice and helpful to Saiqa while he treats Ameena horribly make me cringe. Sohail hits the nail on the head yet again with his dekh raha hoon tu shakal se aisa lagta nahin jis tarah ki tu harkatein karta hai! 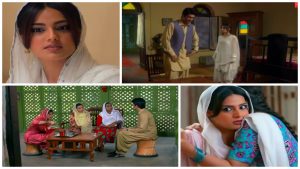 To be honest, after so much time having passed since their marriage, I now do not see what the issue is. Ameena seems to be quite the pleasing, complacent wife methinks! She cooks, cleans, does not moan about how she is bored and needs to be entertained – what is Urwah’s problem with her? Why the constant ‘you have made my life hell’ rant. She does not seem to be causing issues for Urwah so I wish he would elaborate when he starts yelling at her for having ruined his life and complicating it for I am as confused as Ameena!

While Shahzad Sheikh’s comical expressions made me laugh, it was definitely Iqra Aziz who made this episode enjoyable. She makes the innocence and confusion that Ameena feels so apparent and you can not help feel for her. She is not a bechari – bechari which makes her character even more endearing. The actor playing Sohail has really grown on me and I missed seeing more of him in this episode. Finding Saiqa’s desperation a little difficult to understand but oh well.

So Ameena has been sent off to her parents’ home and I wonder if Urwah will begin to miss her? At the rate he is going –  probably not! Someone needs to dig him out of his own stuffy, self importance first! Being a foodie myself, I can not help comment over how yummy that daal looked – and thankfully I have daal ready for dinner tonight – yayy. What did you all think of this episode – would love to hear your thoughts 