After having binge watched seven episodes, this one was obviously a bit slow for me but I am not complaining for it focused on the events unfolding in Urwah and Ameena’s lives after the wedding, but sadly not together. While I had earlier been critical of Ameena’s character and it being a bit far from reality to be normal, I could relate to her today although the preview for next week shows that the loud wailing might be back.

Ameena finds comfort in the form of Aisha Baji which is why she was so upset at her leaving. I have to say Aisha Baji is a breath of fresh air from the negative nands and it was nice to see her trying to help Ameena settle in and understand the importance or rather, position of Urwah in her life. I did feel bad for Ameena though when in her few moments of reflection when she sees Urwah’s picture all she can remember is the moment on her wedding night when he angrily tries to stop her from making noise. All he has done is fret and frown so I can not blame her for being relieved he is gone. Ameena is immature but it is not mere immaturity that makes her behave the way she is and that is the thing that bothers me. For she does not seem extremely simple minded either – or maybe she is. I am still waiting to find out. After her wedding while she is not heavily adorned or made up yet she is making an effort with the make up and jewellery. But I felt for the young girl who found herself suddenly sleeping alone in a new place, and the way she asked her Taayi for an ‘om-late’ was actually quite natural and funny. 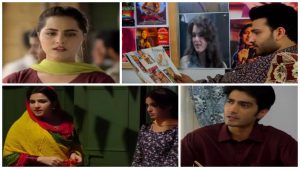 While not evil yet, Taayi is not exactly warm. She was not approving of the match yet anyway and I understand her reasons especially since Urwah is far from happy too. She is disapproving of Ameena’s way as I expect any mother in law would be but I suppose we need to give that track time to develop for so far Ameena takes her criticism well and listens to her. I love Taaya’s role where he asks his wife to think of Ameena as her daughter and also how he speaks to her about going back to school. Ameena’s simplicity was actually touching when she laughed at the idea of going back to school now that she is married like she has a label attached to her now and that does not enable her to go back to school.

Urwah has fled back to university and well, not exactly back to Azra. He hides the news of his wedding from all and I was glad to see Sohail was actually upset that he had not confided in him. However, the way he is he takes it in his stride telling him to keep it to himself but the scene between the two and Azra in the cafeteria later makes me think he will not let a single opportunity pass to make Urwah uncomfortable that Sohail knows his secret. I am not sure whether Urwah has decided to not tell Azra for he fears he will be ridiculed or also because deep down he is not ready to let her go completely. Yes, he made the speech of ‘we are from different worlds’ and all that but I do not think he believes it completely. Also, I am finding it really hard to understand Azra’s fascination with Urwah. If she was the creepy, I-must- have- this- guy- who- does- not- seem- too- interested- in- me sort, phir bhi samajh mein aata. She seems fairly normal so just because Urwah is shareef and respects women which for her is a rarity, but then it can not be that much of a rarity that she overlooks the very obvious differences in their mindsets. But then love is blind and all that. 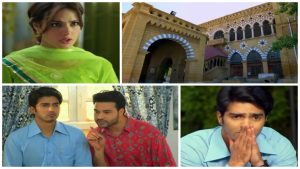 While I understand that Urwah was tricked into coming back so he fled the first chance he got and also that there is the undealt matter of Azra, I do wish Azra ko jaldi nibat shibat kar he comes back so his story with Ameena can actually begin. I wonder how things pan out between him and Azra and how Ameena deals with the challenges of settling in with her Taya’s family and going back to school. What is really working for me in this drama so far is the absence of a truly negative character who has no goal, no aim in life except to cause havoc and misery in the main couple’s life. Iqra Aziz acting was toned down a bit in this episode and actually made me feel for her more. While I still wince at the over –immaturity (is that even a word), I do commend her for trying to get into her character where her body language and the way she sits and jumps up off the bed is far from ladylike, LOL. Shahzad Sheikh’s acting is consistently good. His expressions when he learns that his father knows about him meeting Azra were spot on and I love the attention to detail his character demands such as the huge trainers, the tucked in shirt, the stiff, awkward demeanour. I also like how the director has not relied on painted sets or backgrounds and the scenes where the green open lands and small town life was shown I could almost feel the crisp air and the modern university building scenes were equally appealing. Does anyone know which building/university this is by any chance?

Choti Si Zindagi is working for me as my Tuesday drama fix and am looking forward to see how Urwah and Ameena deal with this new phase of their lives – as individuals and as a couple together. What did you all think of this episode? Would love to hear your thoughts!