Pace of the show is going perfectly fine and story is picking up momentum too. This show might sound weird to many of us but the story they are trying to narrate forms a cruel part of our society, sadly. And I think, they have taken one positive step to teach many lessons to girls and guys about life, of course, if taken constructively.

As expected, Numair blamed Rameen for what happened lately.His friend, Sheraz, wants him to keep himself away from all this satanic stuff but the cheap statement he gave about “khana and dessert” was enough for us viewers to explain his character even more; He was no less than an evil faced wild animal hiding behind the mask of caring and loving husband.One thing , we got to learn from Numair and Sheraz conversation is that the girls should try to keep themselves decent and poised in front of every male relative, even the closer ones. Who knows ,with which intentions they are keeping an eye on you and who knows what they will perceive from your ultra friendly attitude, just saying. 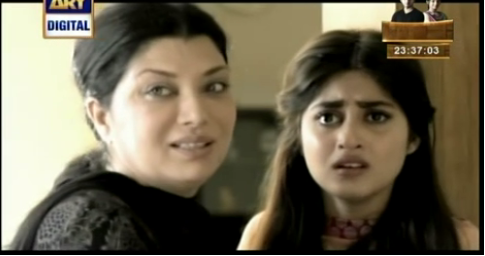 Aazar knew very well that Rameen will never ever reject to marry her ; They shared beautiful chemistry and mutual bonding that was not allowing him, in any way, to believe and accept Rameen’s decision of calling off their engagement. After that unrelenting step of Numair, uncertainty and instability in her mood kept on multiplying as a part of her personality ; Rameen kept on becoming more and more insecure day after day. It wasn’t Rameen’s fault that she had to remain quiet – She was saving her sister’s life by keeping her own life at stake. It wasn’t her mother’s fault either, she was doing it to extricate those miserable consequences that will create havoc in Rameen’s life in future.

Rameen’s life was no less than a torture till Aazar recollected himself and went to meet her ; He wanted to know that what exactly was in her mind that was persuading her to call off their engagement. Aazar’s feelings for Rameen were so pure that she was unable to resist herself from accepting the facts he put in front of her and she got agreed to get married to Aazar as soon as possible.

Right from the day of her mayoun till the end of her wedding ceremony, Numair’s thoughts kept on intimidating her ; She never wanted to face Numair in her life again but getting married to Aazar came with a cost and that was facing Numair almost every day. Sheraz got sick and tired of Numair and decided to put a full stop to his friendly relation with Numair par dheet Numair par koi asar nahi hua.Till now , Aazar was standing by Rameen’s side but how long will he stand, ye tou waqt he bataye ga..

Do share your thoughts on recent installment of Chup Raho.