Ohkay so, this episode of Daldal took the story forward & showed how someone’s dream can force them to turn a blind eye to the one they love. This drama for sure is a decent watch & even though it doesn’t have that charm to draw viewer’s attention immediately, what they are showing is a true depiction of a certain class of society that dreams of settling abroad with preconceived notions in mind that all their problems will vanish the moment they will step outside Pakistan.

So, Shuja threw Hira out of the house & thought this will teach her a lesson, even though it did but it was good to see Kamran standing up for Hira because he could see that Shuja was at fault here. Kamran tried to knock sense into Shuja that by doing this, he was compromising on his family’s dignity but since Shuja only has his mind set on one mission, he didn’t think things through & thought that his irrational decision would yield him the results he is keen on. Kamran did what he could but he also understood that at that moment it was better for Hira to go to her mother’s place. It is good to see that at least after Sadiq, there’s Kamran in the family who is not only rational & sane but mature enough to understand the intricacies of all the relationships. Another appreciable quality of Kamran is that he knows the difference between right & wrong, exactly like his father.

Hira obviously tried to convince her mother but Shaheen didn’t budge. Shaheen can not see her daughter suffering without her husband just the way she did but right now, Hira is unable to understand that. Even though Hira did tell Sakina that despite having everything she never saw her mother happy as she longed for her husband’s presence but when it came to her, Hira ended up expecting her mother to do what Shuja demanded. Right now, Hira’s top most priority is to save her marriage & she knows that this is the only option because Shuja already showed Hira what he is capable of. Just upon hearing Shaheen’s opinion, he threw Hira out of the house so Hira obviously is well aware of the extent he can go to!

Hira came back & tried to do everything to convince Shuja that she supports his decision & that she will do everything to make sure that he gets what he wants. Shuja really has scored a big win in the form of Hira because she is not only submissive but is madly in love with him. Shuja’s change of behavior after hearing what he wanted to from Hira was so ironic yet realistic. Another thing that I found was a depiction of reality was how Sakina kept on brain-feeding Shuja against Shaheen & Hira. People might find it odd that a sister was wishing ill for her sister but this is something that happens in real life too where aunts don’t let their sons have a peaceful marital life with their nieces & in Sakina’s case, since she is suffering from inferiority complex, she now feels empowered that she has her sister’s Achilles heel, her daughter in her possession, therefore she plans on using it to her benefit!

Saniya is also going through a tough time because she is not too happy about her father’s work ethics & also feels burdened when she sees her mother talking about some rich guy that she’d want Saniya to get married to. Saniya knows that her family will never approve of her & Kamran’s marriage but since Saniya is someone who knows how to take a stand for herself, it is a done deal that she will fight for her right & will end up convincing her parents.

Overall, this episode of Daldal was decent. I know the characters of Puphos are quite OTT but I somehow see them as a comic yet realistic portrayal of such relatives, therefore I enjoy their bits. Even though both of them are meddlesome & have a hard time minding their own business but this time around they stood up for Hira & at least conveyed the entire scenario to the right person; Sadiq, because he would make sure that Shuja never does what he did ever again. All the actors are doing a great job, however in this episode Muneeb Butt stood out the most. His acting was not only convincing but effortless as well especially in the scene where he had a spat with Shuja for Hira’s sake. Zahid Ahmed seems to be emoting a bit too much & even his dialogue delivery sounds fake as if he is chewing his words & having a hard time in saying what he wants to say. I hope in the episodes to come, Zahid Ahmed tones his acting down a bit. Armeena Rana Khan is convincing as Hira & I find her acting perfect too, there’s a very small margin for her to perform since the character of Hira is very subtle & shy but still Armeena has done a great job. Please share your thoughts about this episode of Daldal. 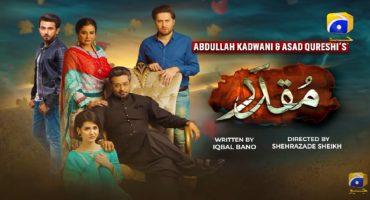