This drama has some big shoes to fill since it is replacing one of the most loved drama serials of recent times. Dar Si Jati Hei Sila’s promos already revealed that it wasn’t going to be a journey like Yakeen Ka Safar since even though Yakeen Ka Safar had some strong messages, it was never a heavy duty drama. After a really long time Bee Gul has written a play which has a classic Bee Gul feel to it – this drama I am certain has not been made to be a commercial hit just like Talkhiyan. The first episode of Dar Si Jati Hei Sila focused primarily on Sila and revealed few details about all those people who are directly related to her.

Dar Si Jati Hei Sila is the story of a big family living in Noor Manzil. All the family members have their own distinctive personalities. The opening scene of this first episode was brilliantly written and executed since this short scene revealed a great deal about the relationship these three individuals – Joi (Nauman Ijaz), Sila (Yumna Zaidi) and Sadia (Saman Ansari) – shared with each other. Joi is a classic example of those male relatives who abuse girls from their family yet no one in the family ever doubts them for a second. On the contrary, everyone blamed Sila for acting strange. The way Sila looked at Sadia and the manner in which Sadia questioned Joi when she came in the room clearly showed that she knew everything yet somehow she decided to keep this to herself. Later on different scenes and dialogues also suggested that there was something going on between Joi and Sadia as well. Sadia’s husband is mostly away therefore she has raised Sila like a single parent which is why her sister-in-laws blamed her entirely for Sila’s flawed upbringing. Sila’s father was never there for her or her mother therefore her tayees consider both of them a liability. It seemed like Sakina Samo’s character ran the show in Noor Manzil which is why her brother Joi got away with everything till now. 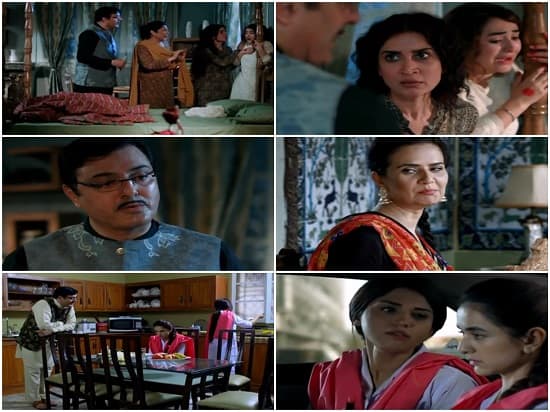 Sila’s cousin Zaini has a completely different personality than her which is probably why just like her mother she feels that she is more entitled to winning Raheel over than Sila! Raheel and Zaini’s interactions came across as more of flirting than anything else. Raheel doesn’t feel attracted towards Sila since she has never put in any effort to stay in touch with him and she gets scared every time he goes near her. Noshi (Zaini’s mother) is also not happy that Sila is the one getting engaged to Raheel therefore she joined in when Joi was telling Tullo (Raheel’s mother) about Sila’s condition. 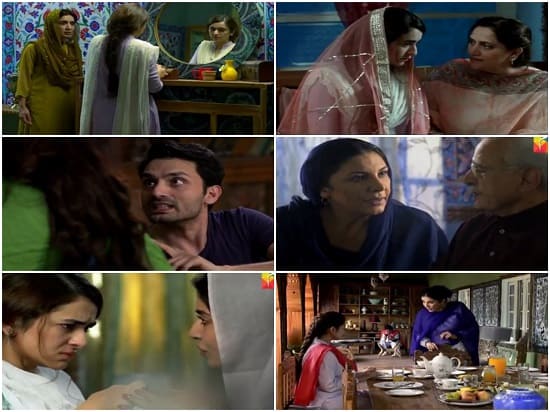 The most powerful scenes in this episode were the ones which covered Sila’s interactions with her mother. These scenes piqued my curiosity more than any other. Yumna Zaidi is a phenomenal performer who translates the most difficult characters on screen effortlessly. There were plenty of scenes in tonight’s episode which wouldn’t have been as powerful as they were if Yumna Zaidi did not give such a brilliant performance. The only time Sila spoke her mind was when she was with her mother otherwise she stayed quiet although she did not like the fact that everyone in the house was constantly judging her. Nauman Ijaz is also continuously experimenting with different roles and he always excels every time. He looks and acts completely different depending on the kind of role he is playing. Saman Ansari, Sakina Samo and Munazzah Arif also gave solid performances in this episode. The biggest disappointment however was that many of the scenes in this episode had already been shown repeatedly in promos. I am surprised that part of the opening scene was also shown in the promos, in my opinion the promos shouldn’t have revealed so much about Sila and Joi’s character.

This wasn’t the kind of episode which wins you over completely but it was definitely the sort of episode which gives you a reason to tune into the next episode. I am looking forward to what team Dar Si Jati Hei Sila has in store for us next. I find the cover photo of the drama really interesting since it mentions revenge apart from everything else. The topic of sexual abuse has been done-to-death lately therefore this drama will only hold the interest of the viewers if it offers something different and meaningful.