This had to be the best episode of Dar Si Jati Hei Sila so far since it didn’t only have quite a few interesting developments to its credit but these developments also indicated that there might be some hope for Sila after all. The recent changes in Zaini and Raheel’s characters have changed the overall feel of the play, it was too dark and depressing before but now these characters have added some positivity to the story. This episode was also well paced, brilliantly written and directed and all the performances were impressive. All the actors have translated their characters impeccably on screen and the attention to detail makes you forget that you are watching a drama. Dar Si Jati Hei Sila has to be one of those very few dramas nowadays which address a serious topic in a way which is appropriate. The script is well thought out and therefore effective. After watching this particular episode, I am more interested in finding out how the story unfolds in the future.

Tonight’s episode opened with Sila trying to untangle a skein of yarn while Bari Aapa kept on “distracting” her by complaining about her mother and sharing details of her mother’s callous behavior which had resulted in her husband distancing himself from her. Bari Aapa is one of those women who are convinced that even if a man does something dreadfully wrong, it has to be a woman’s fault in some way or the other. The way Raheel came to Sila’s rescue showed the roles both these characters were playing in Sila’s life. While Bari Aapa was constantly adding to Sila’s troubles, Raheel had now realized that he was in a position to help Sila and he wasn’t going to let anyone stop him. Not very long ago, Raheel too judged Sila the way everyone else does but when Zaini made him understand Sila’s position in the house and educated him about the role they could play in this situation, he changed completely. Zaini used the influence she exercises on him in a positive manner which has to be the most refreshing development so far. Sakina Samo’s acting has been brilliant throughout, the way she delivers the dialogues and her gestures show how controlling she is. Her character is etched-out brilliantly as well, she has her favorites and no matter what happens she will continue supporting them. 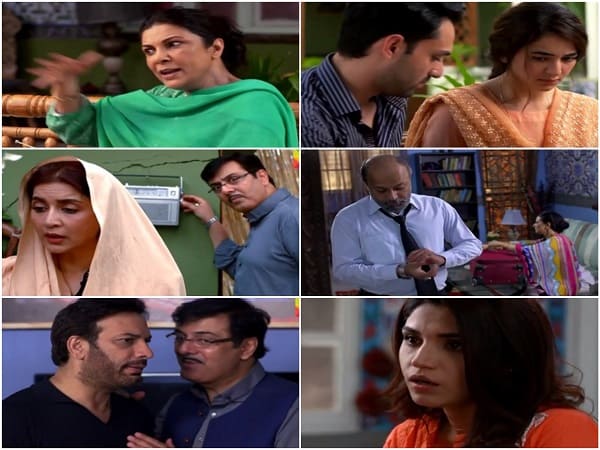 Once again Joi’s attitude towards Sadia in front of Sikandar and his dialogues showed how he has managed to fool him for all these years. Just like Bari Aapa Sikandar too always looks down upon Sadia and has a very high opinion of Joi. He doesn’t think Sadia deserves so much respect and feels that Joi can protect his wife and daughter while he is away. The fact is that Sikandar doesn’t even care about Sadia and Sila therefore shifting the responsibility to Joi’s shoulders is the easy way out. Zaini’s character and the manner in which she took a stand for Sila more than once was the highlight of the episode. Zaini uses her confidence and outspoken nature to help Sila in her own way instead of belittling her the way Bari Aapa does. Zaini’s honesty is the best part of her character.

Raheel’s mother’s conversation with him while he looked out of the window was one of the many conversations tonight showing how no one had any idea about what kind of a person Joi really was. This scene also indicated that Raheel might sooner or later find out what is going on but there are also chances that he might misinterpret the situation the way Sila has been doing. My favorite scene from tonight’s episode was the one in which Sila cleans her table and looks at herself in the mirror, it showed that she liked Raheel and for the first time there was something she was excited about and was looking forward to. So far everything is going exactly the way Joi has planned, he is constantly devising new ways to torture Sadia. The preview of the next episode was enticing, I am looking forward to finding out how Zaini and Raheel will stop this marriage from taking place.

Amna Malik, Yumna Zaidi and Osama Tahir have nailed their respective performances. Nauman Ijaz and Saman Ansari’s phenomenal performances make you forget every other role they have played so far. Dar Jati Hei Sila has a lot going for it and is a must-watch for all those viewers who want to watch a serious drama with a solid storyline, brilliant direction and flawless performances.