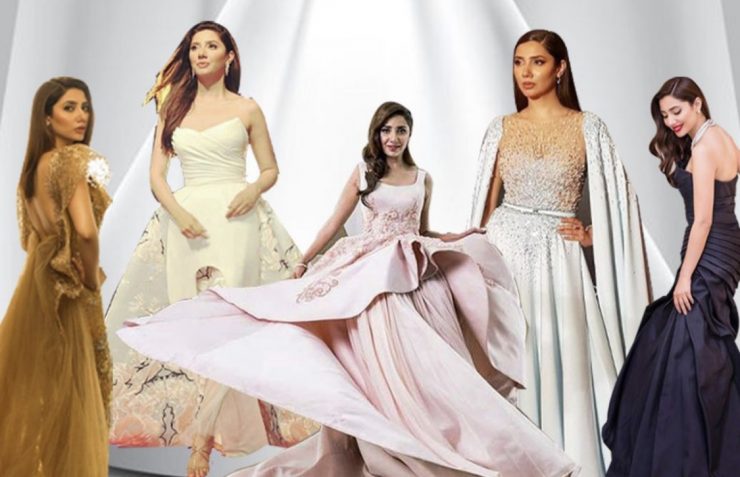 Mahira Khan’s style is one that cannot be categorised; it’s either good or bad. She regularly appears at local and foreign award shows and events, and usually she comes prepared for the pictures. Here’s a breakdown of Mahira’s award show looks over the years. One of my least favourite looks is this Cinderella-style powder blue top with an embroidered and flow-y tulle skirt. Although the colour is light and refreshing, it is quite ill- fitted, which makes it come off as a boring ensemble. There is not much going on with the hair and makeup as-well, thus making it a forgettable appearance. Loving the cut and colour of this outfit, because it fits her just like a glove. Not a huge fan of the pyramid-like clutch she’s holding, maybe she could have ditched that and worn a statement bracelet to make her overall look stand out. Again, not much experimentation has been done in the hair and makeup department. The natural makeup with her effortless hair adorned by beautiful gems worked very well paired with this classy couture gown. Smart choice of having only one accessory to complete the glamorous look. Gorgeous Mahira Khan seems to pull of her looks well especially in the western wear department but this one seems to fall a bit flat in the segment, especially because of a dull colour contrasted with beige. Also, her smokey eye look is giving a grey undertone to her face. Only if the hair had been voluminous, it could have helped to bring the look together. She looks like a real life princess in this intricate powder pink gown. Her side-swept hair and just the right amount of makeup gives the whole look a dreamy, magical feel. Another classic is this bright red ball gown with a beautiful statement piece sitting on her neck. Plain gown, perfect cut, minimal hair, makeup and accessories – that’s how you get people talking! Easily one of Mahira’s best looks as one can hardly go wrong with a black ensemble, that too accentuated by gold accessories. Thank God her makeup artist decided on a muted nude lip colour instead of the classic red. A huge win-win situation. As much as I loved the 2017 look, Mahira Khan stepped down a notch with this shaadi number. A perfect outfit for your sister’s dholki but a huge no for the red carpet. It’s quite possible Mahira’s stylist decided to take a vacation during award week, as she churned out another unappealing look after the LSAs. The ensemble in itself was beautiful but yet again not appropriate for an award show. Even though Mahira is not one to experiment a lot with her hair and makeup (no qualms about that, as her makeup and hair team knock it out of the ballpark most of the times), its always the dress that gets one talking and this has to be one of those. An ice blue cape gown with just the right amount of embellishments cinched in at the waist with a belt makes her look like a dream come true. She looks beautiful and we all know that, but then you look at the outfit and just wonder why she would pick that. Is she trying too hard? It absolutely destroys her whole persona. To be honest, the dress seems off the rack rather than custom-made for the event. The net at the back also looks like it does not belong there.

Which one is your favorite Mahira Khan award look? Let us know in the comments.