I am certain I am not the only one who wants to give up on Mahir after watching this episode! I am no longer rooting for him and would love to see him pay for it if he decides to marry Narmeen. Even though Mahir started showing interest in Narmeen in the previous episode but tonight there wasn’t just a formal declaration of love but also a lot of talk about marriage. My blood boiled every time Mahir referred to Mehru as someone who meant nothing to him. While it was plain to see why Mahir would find Narmeen more attractive, I was not expecting him to be this ‘dumb’! The opening conversation with his mother was the final nail in the coffin.

Until last week, there was reason to doubt Mahir’s true intentions but after watching this episode there is no reason to do so. I just hope that Dobara really is ending soon since we have been told twice before as well that next week was going to be the second last episode. And I hope that we get to watch an ending that does justice to Mehru more than anyone else. The writer definitely made it easier for the viewers to decide whose side they should be on by showing Narmeen’s greedy side. Both Mahir and Narmeen had guilt pangs but clearly, they were much more focused on what they wanted than the reasons why they needed to reconsider their actions.

Tonight’s episode opened with Narmeen telling Mahir that she still loved him. It was almost as if that was all Mahir needed to hear. He was willing to leave everything and Mehru behind but Narmeen did not want him to do that because she also wanted his money. Like Mahir said in the previous episode, Narmeen did not want a Mahir without the monetary benefits. But it seemed as if Mahir forgot all about that and was willing to do whatever it took to marry Narmeen even if it meant leaving Mehru behind. This scene changed how Mahir felt. I must say that the change of attitude and priorities happened a little too soon but then the history these two share does make the entire thing logical even if it is not the least bit likable. 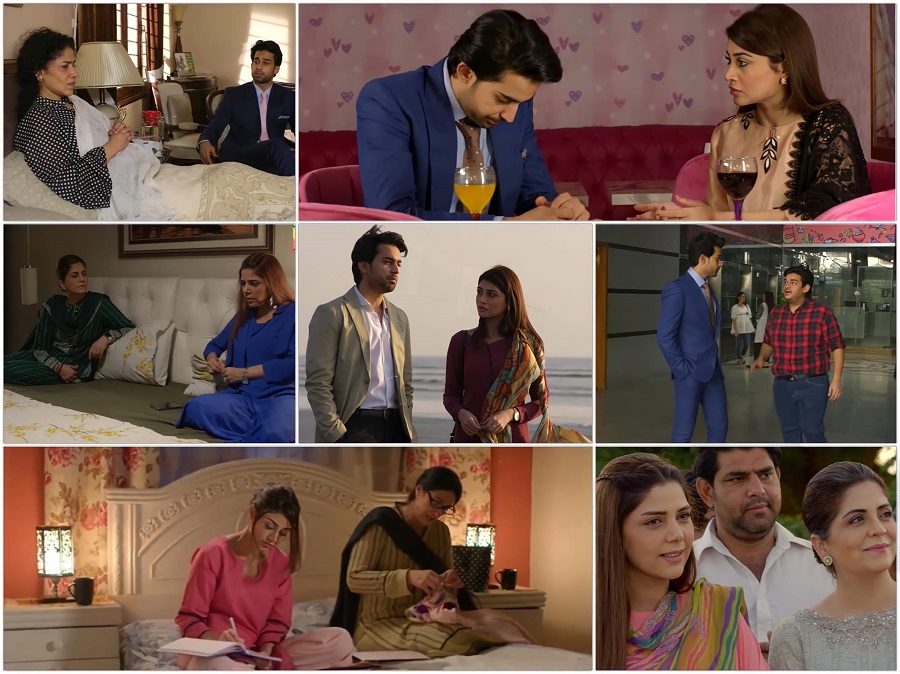 Later on, when Mahir met his mother, I was expecting her to give him more useful advice but her advice was based on her own experiences. Although she had a conversation with her husband previously in which she said that she did not marry him because of his money, it seemed that was not entirely true. Also, Mahir’s father mentioned in one of the previous episodes that he was the one at fault. Therefore, her regret did not make a lot of sense to me. I understood that she regretted ignoring her son but besides that, her situation was not like Mahir’s situation at all therefore this particular situation did not make a lot of sense to me. It would be safe to say that Mahir followed his own heart and this conversation with his mother was more of an ‘excuse’ than anything else. He got support from his mother which perhaps made him even more confident. He did say that he loved Mehru in this particular scene but a few scenes later, his feelings seemed to have changed! Mahir has never been close to his mother and even though she is in a vulnerable situation right now, Mahir is not the kind of person who would follow her advice so readily!

The way Mahir lied to Babar said a great deal about how good he is at hiding things and lying! Bilal Abbas Khan deserves tons of credit for translating this particular side of his character exceptionally well on screen. Mahir’s most dominant personality trait has to be his manipulative nature and Bilal Abbas has made sure that Mahir comes across as a manipulative person even at times when you want to feel that he is being genuine. Narmeen and Mahir’s scene at the beach had to be the one that made me give up on Mahir entirely! He definitely deserves a gold digger who will leave him when he loses his wealth. I have always found Mehru’s conversations with her friend meaningful but tonight they did not go well with her situation especially because I don’t want to see Mehru ‘compromising’ at this point. Narmeen is definitely playing games and not being honest. She is also playing hard to get so that Mahir will not doubt her intentions.

Tonight’s episode changed my thoughts and feelings about Mahir completely. The preview of the next episode suggested that he might overhear Narmeen and her mother talking to each other but it also seemed as if Mehru will not be willing to forgive him. I hope there is a good reason why the Narmeen/Mahir track has taken this turn. Mehru definitely deserves a happy ending and this drama should end in a meaningful manner. And I hope that the next episode really is the second last episode!