Oh My God!! I must say that the supporting characters of this play (Amir, Bhai Jee and Bhabi Jee) are not only hopelessly farigh but also the biggest twits in the history of twits and I couldn’t help but wonder aloud: WHAT WERE THEY THINKING? Bhai and Bhabi have actually lost their brain screws and the lameness level of their ‘tactics’ to change Farah’s mind actually left me perplexed! The supporting characters were given a lot of coverage today so they better have something substantial to contribute to the story.

Alright so all of a sudden it turns out that Bhai Jee’s inner politician has finally sprung to life after stumbling upon Hassan’s infidelity. Bhai Jee’s significant other, like a couple of other characters in the play, is yateem so the only person she has in this whole wide world is Ahmed and therefore, everything that’s important for her hubby is important to her and since she can’t say ‘NO’ to him, she conveniently sides with him no matter how ridiculously lame his plans are. And oh, the couple of other yateem characters are Aisha and Hassan-I’m pretty sure about the former but the latter’s parents might mark their entry because its DB airing on ARY, so anything can happen now :P.

Well, Bhai Jee’s plan No.1 was that acting all goody-goody and sweet in front of Farah and then brain-feeding her against Hassan would be enough to separate the two but little did he know that Farah’s blindly in lovee (zzzzzz) and even though his analysis on Hassan was spot-on, Farah didn’t budge because in the world of dusri biwis, she is the epitome of sabr & wafa *sighs*. But I’d just like to say that even though leaving Hassan is out of question for Farah, she does seem to realize that marrying Hassan wasn’t exactly the best decision she ever made. Throughout the episode, she was apprehensive and to some extent, contrite. Okay so when plan No.1 failed, Bhai Jee stepped in with yet another tactic to convince Farah that she can leave Hassan without any sort of fears and well, as anybody could guess, Bhai and Bhabi Jee are childless (hence the farighness) so Bhabi Jee approaches Farah and offers some great words of wisdom (I made some changes): dekho agar tum bachay ki wajah say Hassan ko nahe chor parahi tou kia masla hai? Mujhay pata hai kay mein tumhari sautan ki bhabi hun, tumhara Ahmed say koi blood relation nahe hai BUT meray mian jee khisak chuke hain aur according to him, tum itni achi ho kay ek dafa ki request par humain apna bacha dedo gi- see, it’s a walk in the park, right? Hand over the baby to us and our family frame will be completed, you’ll be able to walk out on Hassan and your piya, along with his Biwi No.1 and Beti No.1, will live happily ever after. The End. THREE problems, ONE solution ^_^ So while Bhai Jee is pleased with himself for coming up with a plan so foolproof, Farah shuts Bhabi Jee up and well, Bhai Jee has to come up with ANOTHER plan. Now, this time around, he decides to bribe Farah with his brand new BANGLA because he still doubts her persistence and thinks that his brand new irresistible offer should do the trick. 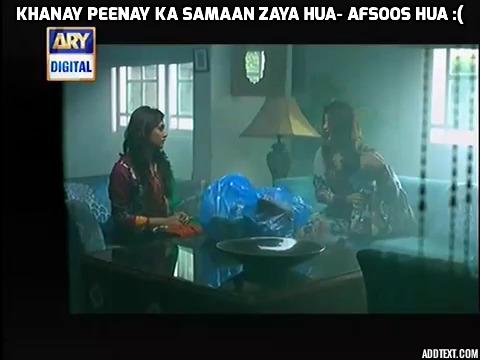 Honestly speaking, it never dawned on me that Hassan isn’t as affluent as his house, car, mobile phone, office, fancy suits, hair gel and the dresses of his begmaat suggest so the fact that Hassan is struggling financially because of multiple responsibilities did come across as something shocking. This goes to show that apart from being disloyal, dishonest and shameless, Hassan was senseless too which is why he tied the second knot, despite knowing that his financial conditions are not very sound or ideal for supporting two families. Plus, both his Biwi No.1 and 2 were expecting at the same time so that’s how his decisions show a lack of forethought- nut-job he is! I am soo glad that Aisha and Hassan’s scenes in Murree weren’t shown because to see someone like Hassan expressing his love for his Biwi No.1 would’ve been unbearable so thanks for sparing us the torture! You know, Hassan, Aisha and Saman- they look picture perfect as a family and Fahad Mustafa and Hareem Farooq share great chemistry and if only they’d brought together the same people for a better project, we would have been looking forward to it. But here we are, looking at a guy juggling and twirling around (the twirling in the opening sequence makes it even worseeee) his Biwi No.1 and 2. You know, sometimes I wonder how a girl who used to be so active and independent before marriage can be so content with a post-marriage life that only involves lazing around and waiting for a phone call that’s never meant to come? You know, I would have a lot more respect for this play only if they show Farah leaving Hassan and starting a life on her own (even if that means living in Bhai Jee’s plot) :P. Hayee, but khair, right now, our Biwi No.2 is having a candlelit dinner with HERSELF because her piyaaa is in MURREE, with his BIWI NO.1 and BETI NO.1 and BIWI NO.2 is discontented and yet, she is ‘celebrating’ the day she met the guy because of whom she’s all alone right now, true love, huh? 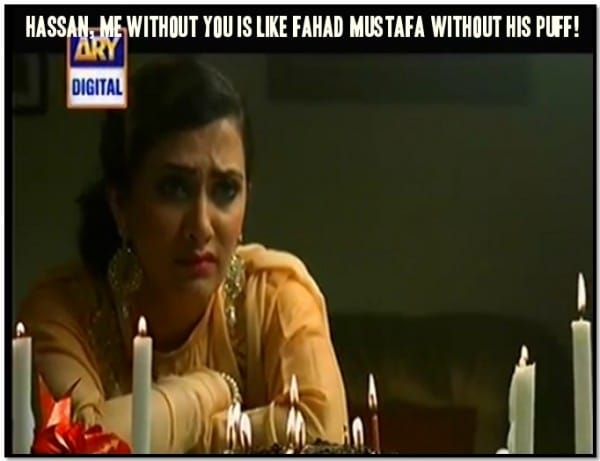 Well, well, well, Amir sure didn’t learn his lesson and here he is doing what he is best at doing- harassing! The thing about this guy is that he LOVES to drop notes and letters because he believes in PENNING his thoughts and feelings. Someone wise once told him that letters serve as ‘aadhi mulaqaat’ and Amir sure took this veryy seriously. Like I mentioned before, if he doesn’t have anything to add to the story, as I suspect, he should leave ASAP.

This episode clearly showed that Farah is not satisfied with her life so I really really hope that she takes a stand for herself; the chances are slim but I like to hope for the better ;) What do you think of the latest developments? Share your thoughts!