Yaar aap sab kuch chorain, bus yeh sunain: Farah is no longer ‘just’ Farah- she is Hassan’s Farhi!!! I have to recover from a laughing fit and you might think I’m overreacting here but trust me, the way Hassan (Fahad Mustafa) said ‘aap meri Farhi ka khayal rakhay ga’ was soo nauseatingly comical that once again I had this, ‘what-on-earth-am-I-WATCHING&HEARING feeling! I was about to have my ears checked but Hassan said it AGAIN and that’s when I had one of my rare Eureka moments- I have finally discovered the wisdom behind Hassan’s logic of nicknaming his wives! As far as I can figure, whenever Hassan feels like his wife is being extra supportive and nice, he changes the ending syllable of her name from ‘a’ to ‘i’- you see, Aishaaa became Ashiiii and right when he saw that his Biwi No.2 is not only going to give birth to his child but is also selling her gold kay kangan for him, helping out his excruciatingly irritating daughter with her homework and sharing some romantic moments with him when Biwi No.1 isn’t around, he realized that its only fair to alter Biwi No.2’s name and lo and behold! Farah becomes Farhii! Chalo, ab batanay mein bhi acha lagay ga: Hi guys, this is Hassan here and here meet my begmaat, Ashiii and Farhiii!’ 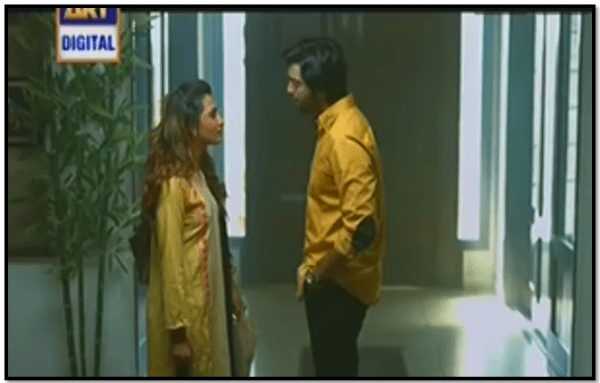 Pheww, thanks for bearing with me guys, the thing is that this episode was just soo pathetic that I had to struggle to regain my composure and now that I am back to normal, let’s just say that each and every character from this play must be locked up inside a mental asylum starting from Bhai, Bhabi, Hassan, Aisha, Farah right down to Saman! I haven’t come across dialogues as disgusting as the ones I came across here. I mean, Hassan ‘promises’ Saman that she will ‘receive’ a bhai as her Bday gift and his actual words are: aunty aap ko bhai daingi?!! What’s the writer’s point here- Aisha and Saman are ‘lucky’ enough to have Farah in their lives because only she will do the honours of completing the family frame? And I may be wrong but I couldn’t help but wonder that Saman is probably in class 2 and the maths exercises of her grade can’t be that hard but it’s strange how Ashi (who is most certainly NOT an illiterate/uneducated person) didn’t know how to help her daughter out which again seemed to be one of the writer’s attempts to show how ‘badly’ Aisha and Saman depend on Farah for the simplest of things and they just can’t do without her! Yes, Saman ‘abhi sirf bachi hai’ but it’s the 21st century and even children are very smart these days so it is extremely unnatural that Saman is accepting all the abnormal explanations & dilasay so happily & wholeheartedly. Sometimes it almost seems kay even if Ashii leaves Saman someday, it’ll only take Hassan’s sweet talking and Aunty’s puppet mimicry to make Saman forget all about her mommy dearest!

And I don’t think I disclosed the most shocking part yet: while these ‘bday par Aunty bhai gift karain gi’ talks were going on, Aisha was listening but not reacting! I mean, tell me, where in the world does THAT happen? You know, that’s exactly why I don’t feel anything for Aisha anymore because as much as I can  understand what she’s going through, the truth is that she is the one making all the wrong decisions for herself. 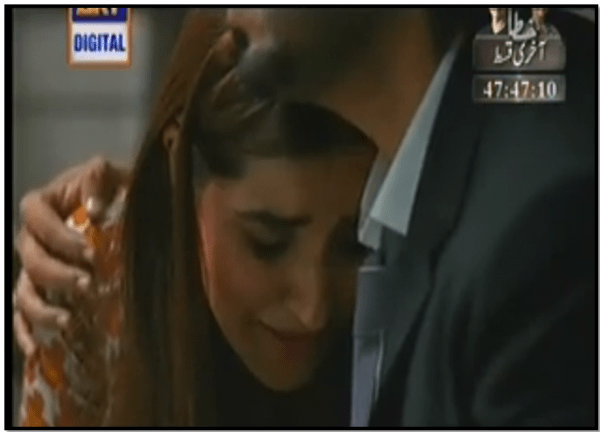 Alright, that much expected ‘Aisha ya Farah’ ultimatum has been issued to Hassan but remember, our hero, nope- villain is in love with both his wives so he can’t think of leaving either of them. Hassan is so dheet that since the day he got nikkah-fied, his justification has been: BAS sab kuch aisay hi hogya aur mein nay kuch bhi soch samajh kar nahe kia! Look bhai, you weren’t a moppet, you weren’t drugged, no one pointed a gun at you or threatened to pull the trigger so HOW do you explain, ‘bas hogya’?! By the way, I loved the way Aisha corrected him when he was continuing his ‘I love you Ashii’ ki rutt! Throughout tonight’s episode, Aisha was in this queer state of confusion. She is an educated mother of one and I guess at this point, she should be able to trust her own instincts & judgement to make the right decision but no no, even though she’s well aware that Hassan doesn’t deserve her, she still relies on the advice of the Socrates of the family- her Bhabi Jee! Bhabi is the aunty agony of the family and according to her, jis tarah Farah nay Hassan ko ‘pyar’ say tumse cheena, tum bhi Hassan ko ‘pyar’ say hasil karlo! And lo and behold! Aisha is following her advice too! My point is, why can’t she think for herself and why does she allow a third person’s advice to alter the course of her life? On a serious note, it’s good to see that Aisha is not acting as if things are perfectly normal with Hassan which is actually a good sign warna I was thinking kay Aisha isn’t even a human being!

A  moment of relief: Farah’s parents are finally back so I GUESS we won’t be witnessing the two-biwis-living-under-one-roof scenario next time so congrats! By the way, Ashii’s life turned upside down, she just found out that she has a sautan and she has to witness her daughter-sautan’s bonding scenes too but isn’t it ironic how din ho ya raat, her blush-on, lipstick & eye-shades suggest that she gets ample of time to take care of her make-up?