Ohkay so, Fraud is definitely going to be one such drama that will be remembered for phenomenal performances of all the actors that are a part of its team. It is indeed a treat to watch all these actors breathing life into all these characters & putting their heart & soul into their performances. I will say that despite being a predictable storyline, Fraud has everything going for it that makes me look forward to its episodes every week. The only thing I do have a concern about is the pace of the drama which can easily be resolved with double episodes per week but it seems the mega episode was just a Pre-Eid bonus & after that we’re back to the regular programming, which makes the development slow with almost no progress in the story.

The Nisar family is still dealing with the betrayal caused by Nayel with Nisar still hospitalized & ladies saddened to the core. Nisar himself hasn’t fully recovered & healed therefore he keeps on mentioning how heart-broken he is. Nisar continuously tells that he raised Nayel as his own, but then again, he should also understand that everything Nayel did was also a consequence of how Nisar rejected him.

I really like Maila’s character so far. It won’t be wrong to say that she definitely is my favorite character & I wish to see more of her in the rest of the story. The way she takes a stand for her family & even reasons with her parents every step of the way make her a very refreshing character to watch for sure. Rabya Kulsoom also has performed it wholeheartedly which makes Maila come across as a very strongly written character. Although Nisar himself spent his savings on Maya’s wedding but it still didn’t stop Maila from taking such a decision because she wanted her father to recover soon.

Inspector Talal’s story has been introduced at the right time because things started to seem a little too grim & stagnant. It is good to see that Talal lives a wholesome life with his mother & sisters always by his side. Talal is definitely a gentleman who has been raised perfectly, that is why he still remembers everything that Nisar did for him. It was interesting to note that even Talal’s sister was very much aware of the favors Nisar has did for her brother, which makes it obvious that this entire family is indebted to him. In this scenario where there’s absolutely no one to help Nisar & his family, Talal definitely has been doing what it takes to comfort & support them. I would’ve definitely liked if they had shown a different equation between Talal & Maya, more like that of an elder sister & younger brother because to see Maya’s expression hinting about a soft corner for him seemed a little unnecessary. It was like she acknowledged that Talal was being nice but then she started assuming that his niceness was linked to her.

Shaan’s wife has left their daughter behind & she has made it very clear that she wants a fresh start with her second husband. Zimra could have all the justifications for leaving Shaan because of his step mother & sister but for her to leave her daughter only because of her new husband was hard to digest & seemed unjustifiable. Before getting married, she never really spoke to Shaan about the possibility of shared custody. She took the child because she wanted to & now once again, she left the child only because this is what she wanted. This entire scenario has obviously created a lot more pressure on Shaan to get married so that his wife can at least look after his daughter. 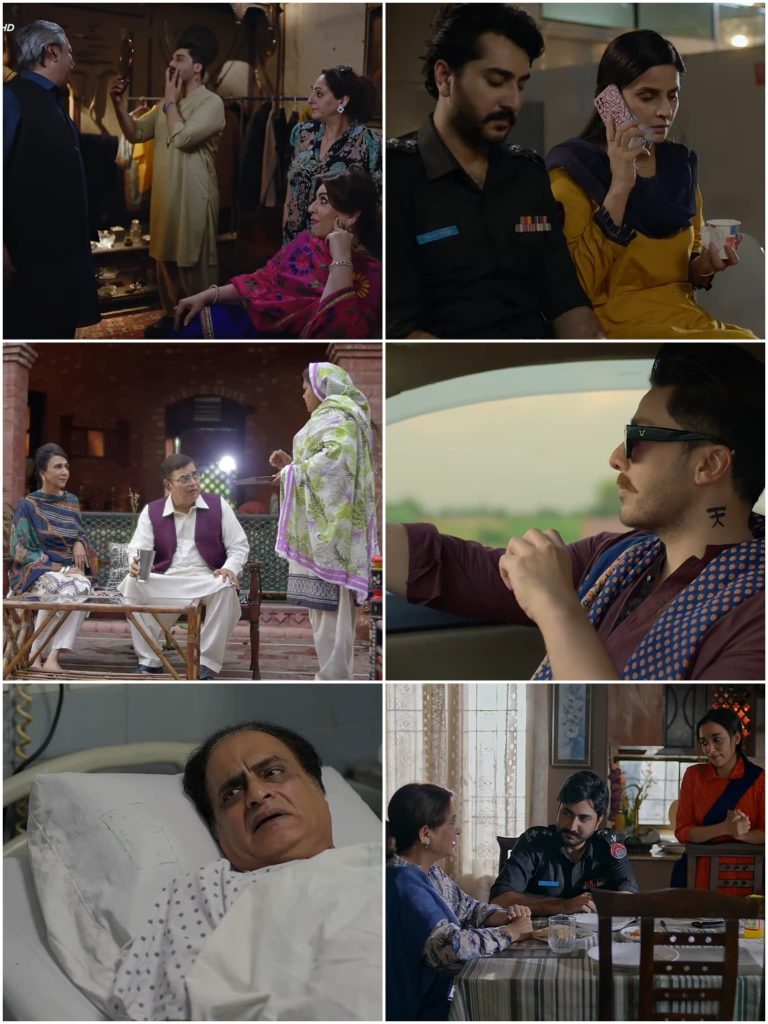 Sajih & his group have finally arrived in a small town in Punjab & have already started fabricating their story. With towns like these, the communities are so close-knit that the news is obviously going to spread, which will help them further their agenda. The family they have been targeting already started showing interest after they found out that Hashim is unmarried & his parents want to get him married. This entire scenario at the moment is keeping my interest alive in the show & I want to see how things progress in this track. I wish there is more development in Maya’s track & she gets back on her feet ASAP. I think it was a very nice conversation where Talal discussed Maya’s future plans, asking what she wants to do next? That should give her the motivation to at least do something in stead of letting her family & herself suffer.

This episode of Fraud was definitely interesting but I must commend Rabya Kulsoom for her brilliant performance in the previous episode showcasing Maila’s outburst on Nayel. The way she wrapped her hair in a bun, giving her character a realistic look took her performance on another level. It clearly showed that for her, what mattered the most was conveying the emotions of character rather than how she looked on the camera. As always, Mehmood Aslam & Saba Qamar’s performances have been phenomenal too but Rabya Kulsoom definitely has stood out more in the latest episodes. I will say that the preview of the next episode has been deceptive, they showed the same scenario last week & again, in this week’s preview, they repeated Talal’s proposal & Maya’s parents’ reaction to it. If they actually show disappointment at Talal not seeking Maya’s hand, I think it would make them look highly unreasonable because after 2 disastrous experiences, they should give Maya a break. They should also stop expecting that others will do the damage control for them & will take away Maya because they have been hurt. The least they can do is graciously accept Talal’s proposal for Maila & respect the fact that he actually likes her. Anyhow, Fraud has definitely been a very interesting drama to watch so far & I am looking forward to the next episode. Please share your thoughts about these episodes of Fraud.