As was expected, this episode was very intense right from the beginning. Tooba and Geeti are woken up by someone throwing water at them and on seeing that it’s Adil, Tooba thinks he’s there to help them. But Geeti’s expressions show that she can sense the real matter. 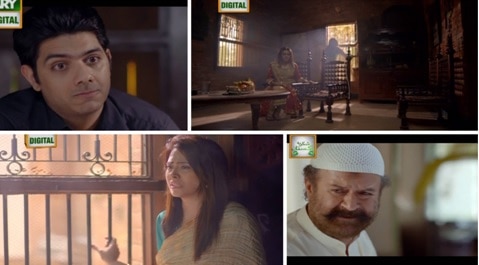 At Waqar’s house, Salma consoles Aamna. Faiz, as always, is mostly complaining or finding out faults. Here also he says there’s no point in blaming fate and that the girls must have gone at their own will. Akhtar (Ayub Khoso) makes an entry as Geeti’s father. He breaks down after coming to know that his daughter is missing. Maira tries to comfort Ubaid and Akhtar but it’s difficult for them to control their emotions. Akhar still can’t believe his daughter has really been abducted and asks if the police have been informed. Ubaid tells him it’s better not to get the police or media involved because it’s a matter of the family honour. In the meantime, a phone call comes to Ubaid where Adil changes his voice and pretends to be one of the kidnappers. 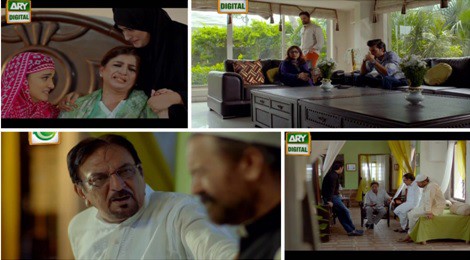 It was interesting to see Adil giving his own twisted reasons for the kidnapping. He says Tooba’s decision to marry Moiz made him feel helpless and weak. He blames her for it and says they are both at fault. Now, he feels, they both are equally punished. Amidst all this, I did notice how pretty Tooba (Sumbul) looked as a bride. The jewellery, make up and dress suited her well and I really liked the look.

After Adil leaves, Tooba asks Geeti why she hadn’t told her that Adil felt this way and also says that she thought Geeti and Adil liked each other. Tooba only thought of him as a friend. Geeti tells Tooba to get married to Adil to get out of there but she forcefully denies, saying she hates him now. Geeti says Adil has crossed the lines between love and trust. Despite all this Geeti says that since their reputation is at stake due to this incident, they need to think of a way out. They worry about what their parents might be going through and feel bad. The girls shout for help but it’s of no use. The camera work was brilliant in attempting to show the audience that the girls were kept in a secluded place with no one around to help them out. It was a clever move from the director and DOP (director of photography).

Two days have passed since the kidnapping. Waqar, Ubaid and Akhar all gather to discuss with Adil about the situation. Here also he further tries to persuade them not to call the police. He tells them he’ll not give up until he brings back Geeti and Tooba. He emotionally blackmails Ubaid, saying he should trust him since he calls him his ‘son’. An odd thing that others in the family should have noticed was whenever everyone asks about Tooba and Geeti, Adil only answers about Tooba, which only goes to show how obsessively he thought about her.

Akhtar doesn’t look happy about not involving the police and is upset but also helpless. At Waqar’s house, Aamna and her sons are also worried. Faiz tells Moiz to forget about Tooba and says the family name would be maligned by marrying a girl who’s been kidnapped. They also worry about how Ubaid will manage if kidnappers ask for a ransom since he’s not financially well off.

Adil tries to emotionally support Khadija (Humaira Zahir) while Maira (Kiran Tabeer) and Tania (Shehzeen Rahat) keep praying for their safe return. From the beginning of the play, Geeti was shown to be a character that had knowledge of Adil’s feelings when none of the others did and now she has been kidnapped along with Tooba precisely for that. Adil is also punishing her for not helping him in wooing Tooba. As Geeti recalls the events leading to their kidnapping, Tooba realizes how they were led on and trapped. 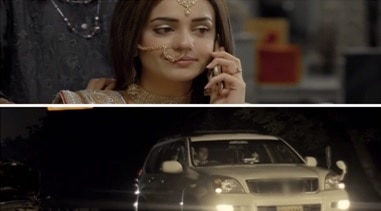 Tooba plans to escape by hitting Adil on the head as soon as he comes in but it’s not so easy for a girl, even the two of them against a man. Then, Tooba tries again by agreeing to marry Adil. But he has revenge on his mind and plainly refuses. He says he’ll make the situation so much worse that Tooba’s parents would want Adil to marry their daughter but even then he won’t accept her. When Adil comes onto Tooba, Geeti tries to protect her. That’s when Adil shoots Geeti. Then Adil comes after Tooba. I wasn’t expecting Adil to actually bring out a gun and shoot someone. His character has turned completely dark now.

Adil’s friend is outside, who seemed like the owner of the bungalow. He tells Adil that he shouldn’t have killed Geeti but says he’d handle everything. In the morning, when Adil comes home in changed clothes, his mother thinks her son is making himself sick with worrying about the girls. Mothers are always shown to be a bit biased towards her children, especially boys.
Ubaid and Akhtar are still worried but Akhtar says he can’t really trust Adil. Ubaid keeps saying to have faith and says they’ll inform the police when Adil comes back. Tooba is shown screaming for help but obviously no one comes. She stays in the room with Geeti lying lifeless in one corner of the room. She can’t accept what has happened and is in shock. 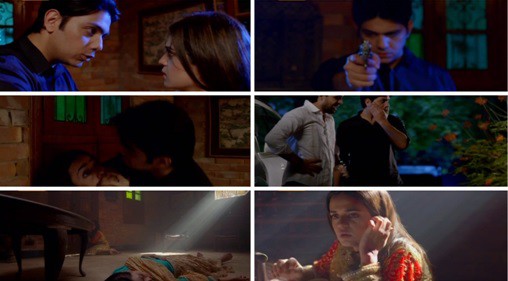 All that has happened to Tooba is only the beginning of her ordeal and how or whether she even recovers from this shocking and tragic experience is for us to find out.

I noted quite a few things that didn’t quite match the situations in this episode, especially Faiz’s quirky sense of dressing. Even in the midst of so much tension he still manages to stay fashionable (a pair of yellow trousers, in this case). The same goes for the scene where Tooba’s sisters are praying and they had painted nails. In so many of the plays, I’ve seen this, even in funeral scenes, where the ladies are all dressed up like nothing has happened. Also, the repetition of the same dialogues does emphasize the point but more than twice, it just gets too much.

Sumbul Iqbal is flawless with her expressions, especially the trauma of seeing her cousin getting killed in front of her really is appreciable. It gave me goose bumps. Even though I was kind of expecting all this to happen in the episode but the portrayal and execution of the scenes was good and aesthetic. On the whole, in my opinion, it was a well directed episode.

How many of you watched this episode and what are your thoughts about it?