Eleven episodes down and there are so many story arcs at play at the same time here. The highlights of this episode were Amtul finding out about Abrar’s second marriage and disclosing it to everyone, Momina revealing their father’s second marriage to Abeer, Momina and Abeer confronting their father and last but not the least Momina and Arham getting into yet another argument which just might be their last.

Momina is devastated after finding out that her father has married Fehmi so much that when Arham calls she is unabe to speak and keeps crying. This worries Arham so without a second thought he jumps into his car and comes over to console Momina just to be met with her callousness. Looks like this revelation has left her so rattled that she doesn’t believe in the whole idea of marriage anymore so any love shown by Arham for her seems meaningless to her.

She doesn’t tell Arham why she is so devastated rather they a have a heartfelt talk about what’s it’s like to live without a mother. Arham finds out about this later when Amtul mentions Abrar’s marriage in order to make Afaan and Arham more distant towards the Abrar family. 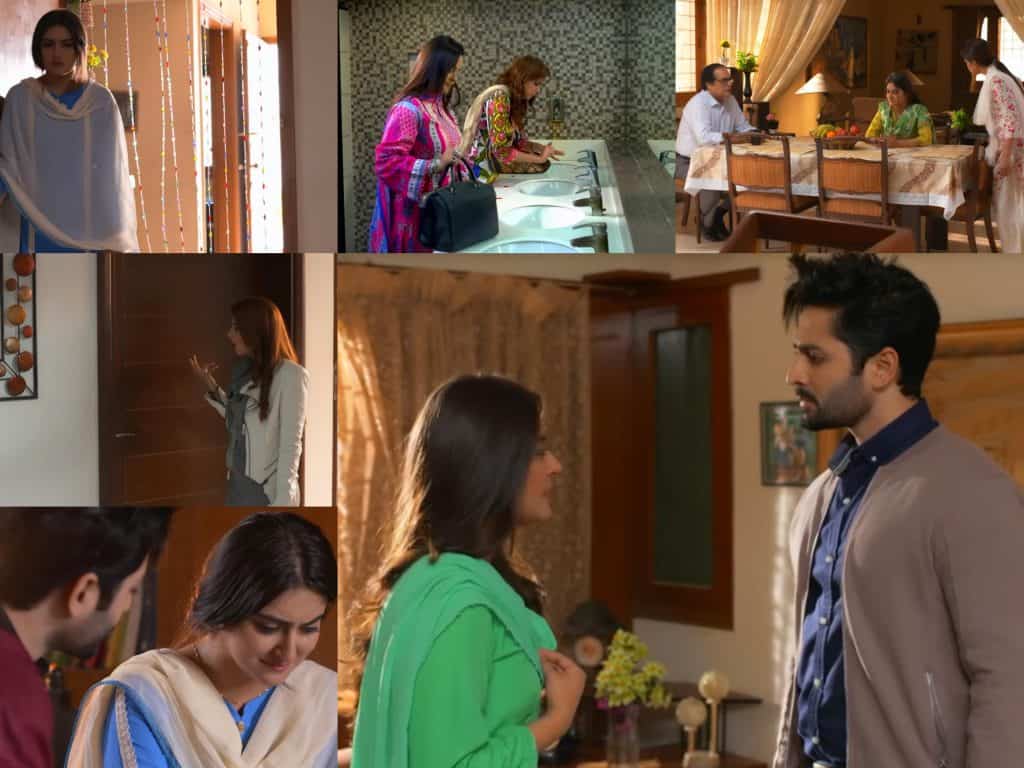 On the other hand somethings make no sense like if Fizza is Zawar’s sister then why is she living at Arham’s home and not at her brother’s. Moreover Fizza is embarrassingly in love with Arham. He clearly shuts all her advances but she embarrassingly keeps wanting his attention. Amtul is obviously trying to make them hang out together and then there’s the dinner part which was so badly acted, that’s also where Amtul meets Fehmi at the restaurant and finds out that Abrar has remarried.

Finally when Abrar gets home after dinner he is confronted by his daughters to which he says if they weren’t so callous towards their baby brother he wouldn’t have to get married and find him a mother who’d take care of him but both his daughters are adamant that he got married because he wanted it for himself.

After finding out about Abrar’s marriage Arham goes back to Momina’s place and confronts her for not telling him before and acts very rudely with Momina even tho Abrar’s marriage has nothing to do with Momina but Arham’s position is also understandable to some point because he wants to marry Momina but is probably tired of fighting one problem after another in order to convince his mother. Both Momina and Arham are all out of patience and very angry at everyone and everything mostly at the situation but they don’t know where or how to channel this anger so instead they end up being mad at each other.

They both say things they can not take back now. Looks like Arham has lost all hope and will be making no more efforts to reconcile with Momina and probably will consider Fizza now. In the coming episodes Abrar will bring Fehmi to his home and that will bring a new storm.

How did you find the new episode of Haara Dil? Do share wit us.