Ohkay so, it was a happy ending for Mehreen & Aswad in the last & final episode of Hum Kahan Ke Sachay Thay. I will however say that for me, there was more to the last episode & I am happy about that. It won’t be wrong to say that after watching this drama, it can be safe to say that it was a product coming from an intelligent team of drama-makers. The very first thing I will wholeheartedly give them credit for is their decision of keeping it short & to the point. In an era where every channel feels the need to drag the drama past 30 episodes, this one ended at the right time & that is why every single episode seemed engaging & decently paced. I will also commend the director Farooq Rind for giving this drama a complete wrap-up, a very detailed & thorough closure that literally tied all the loose ends. It definitely seemed like a conscious effort to execute the last few episodes in such a manner that despite being fast-paced, it still looked detailed.

As much as I am happy that Mehreen found her voice, I would’ve loved it if she had found her voice before Aswad had given her the edge to have one. The Mehreen that we all knew & felt connected with was the one who had her own voice, who did not shy away from speaking her mind but sadly, she lost that spark & suddenly, now when Aswad clarified everything, she was back to being her usual self. It automatically gave Aswad a lot of power & authority which I felt should not have been the case because I am sure the audience would’ve rejoiced at the thought of seeing Mehreen do all of that on her own. Now that Aswad decided to come clean & hold himself accountable for everything, Mehreen got a chance to speak her truth too. As much as this ending & Aswad’s transition makes sense, it somehow puts him on a higher pedestal, which I think should not have been the case considering what he had been doing. All this while when Mehreen kept on telling her truth, Aswad chose not to pay heed to it but the moment he decided to trust Mehreen, it immediately brought her immense relief as if now what she was saying was actually making sense & didn’t hold any value before.

Anyhow, Mehreen decided to make amends with her mother. I think the writer should’ve left it at that point where it was an effort from Mehreen’s side to forgive her mother for being unavailable. Seeing how every single one of them was ready to change, rectify & realize their mistakes as well as apologize to Mehreen kind of made it a bit too obvious that everything was now going to be fine & perfect. Maybe including one of these conversations in the previous episode would’ve stopped it from looking a bit too predictable. 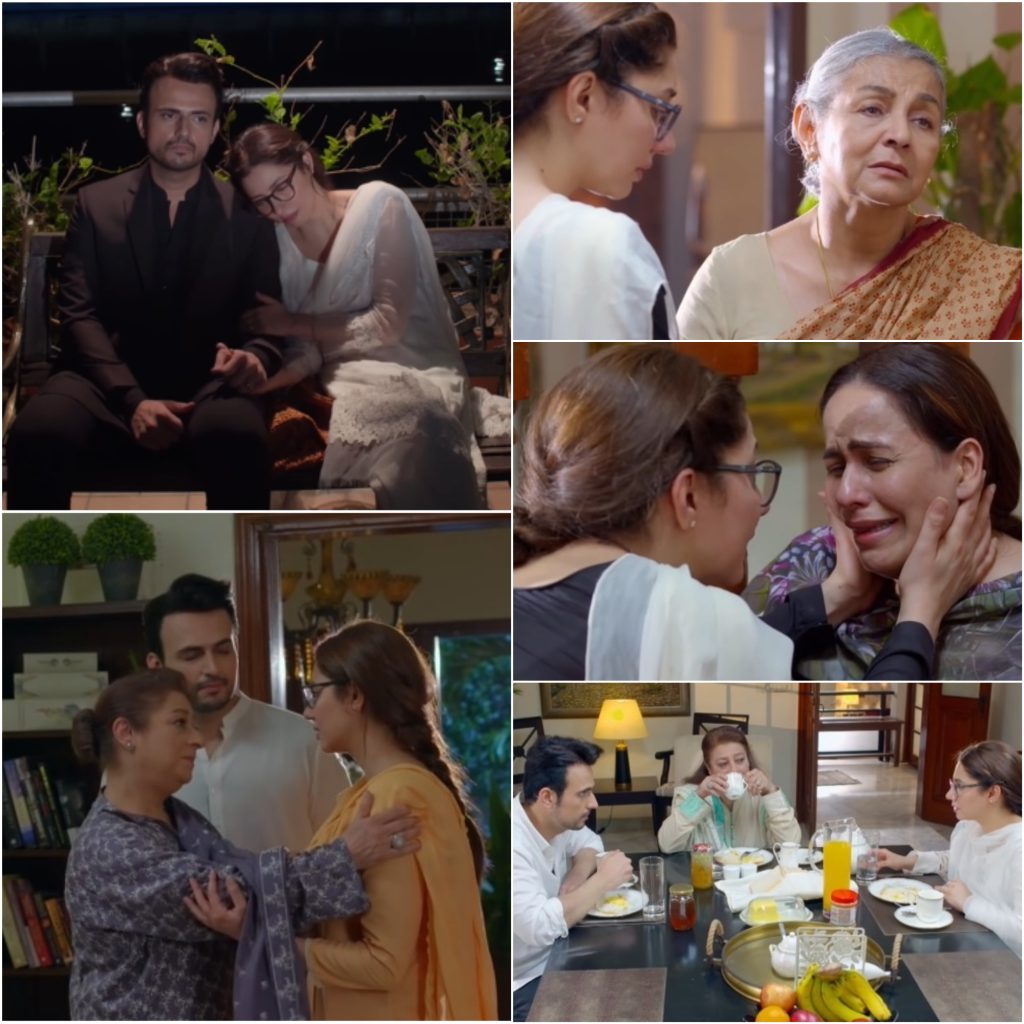 I wish Nani had at least found her voice in the end too but she continued being her unreasonable self. It was unpleasant seeing how she decided to save herself the moment Shagufta walked in, once again trying to hold Mehreen accountable as if she was at fault for coming to meet her. It’s been obvious that Nani couldn’t do much at this age but in the end, the least she could do was accept Mehreen wholeheartedly & tell Shagufta to stop holding Mehreen responsible for something she is not guilty of. This entire scenario was impactful only because of the things Mehreen said because whatever Shagufta or Nani said just didn’t change much for me. It was only because they had to pay a huge price that they were now realizing their mistakes – if Mashal hadn’t died, none of them would’ve changed ever.

Aswad & Mehreen decided to sort out their differences too. Just because Aswad figured out that Mehreen has always loved him, he decided to reciprocate it. Once again, it was only because he stumbled upon the other side of the picture, he decided to change his perspective. This is something that makes me wonder what would’ve happened if he had never ever found out the truth? He would’ve still believed Mashal. Just because Mashal is not around, he decided to accept Mehreen’s version & also the love she had for him – which he by the way thought was just another lie that Mehreen was telling. Aswad did empower Mehreen, he did become supportive of her but somehow, I still find it a bit of a stretch, more like a very hard attempt of showing a redeeming quality of Aswad. It should’ve been Mehreen’s decision in the end but somehow it all fell into place because Aswad was the one who decided to re-write this chapter of their lives. I really wish Umera Ahmed had at least given Aswad a mind of his own, something that would’ve made him a decent character despite his shortcomings because that still would’ve made this happy ending look & feel like a happy ending. Seeing Aswad behave so unreasonable for so long & then immediately changing makes this ending a but undesirable.

Hum Kahan Ke Sachay Thay was definitely a very interesting drama. It was not an easy watch, to be honest, however, the element of mystery & suspense made it quite engaging & gave the viewers a lot to talk about. The plot was definitely interesting & explored how childhood traumas can turn into long-lasting demons that stay with you as long as you live. Mashal’s character might not have been everyone’s favorite but still, the way Umera Ahmed succeeded in creating a soft spot in everyone’s heart for her is commendable. It was explained right from the beginning that Mehreen & Mashal are the way they are because of how they were raised & what they endured during childhood. The reasons behind Aswad’s irrationality were not explored much, which is why I feel he still couldn’t redeem himself. Hum Kahan Ke Sachay Thay has given Mahira Khan & Kubra Khan a new level of fame & sucees. They both have earned it because of the way they have performed their respective characters. Mahira Khan was definitely a star of the show, followed by Kubra Khan. Usman Mukhtar also performed really well, especially in the last few episodes. Huma Nawab was impressive throughout & she made Saleha’s character quite endearing, however, I do wish she had been a bit more in touch with Aswad’s feelings as a mother. Zainab Qayyum, Shamim Hilali, Kaif Ghaznavi & Ali Tahir played their parts really well too. Khalid Malik left quite an impact in his limited scenes. The OST was beautiful & this drama was definitely one of the best projects of Farooq Rind in terms of direction & execution. Please share your thoughts about the last episode of Hum Kahan Ke Sachay Thay.

ps: Special thanks to all the readers who read the reviews & kept the discussions interesting. :)