So the ‘psychiatrists-in-a-pakistani-drama’ practice continues. I am not a fan of Maami’s personality but I am sure my expression mirrored the perplexed one on hers when the psychiatrist was dishing out her words of wisdom. Shadi karo na karo, bhai type se karo ya total stranger say, time spend before shaadi with total stranger is helpful how – wait, hand over the psychiatrist’s job to Shariq. Ah, yes. Let’s do that. Armed with that new insight, Saba’s parents, rather her mother feels that Shariq should spend time with Saba before she gets married so she is able to be comfortable in his presence which is being transitioned from ‘bhai’ to ‘miyan’. And Shariq? I had noooo idea being a DC was such a ‘vaila’ job-seriously! He is babysitting Zoya (making daily calls to the servant to make sure she had her juice on time), nurturing and easing Saba’s mental state of mind – when does this guy actually work?

Although he seems to be trying to be friendly and act as naturally as possible around Saba, we see Shariq feels trapped in this new relationship – as expected. Not only is Saba mentally not all there but she is someone he has viewed as a younger sister and he feels it is not easy to switch the tag of ‘behn bhai’ to ‘miyan biwi’ as he explains to his mother. I find Saba’s father’s reaction and approach although not fair to Shariq but much more believable and understandable as a father rather than her mother who seems to be living in ‘la-la land’. Maami is seriously grating on my nerves. Being hopeful over your child’s recovery is one thing but after the horrendous first ‘outing’ Shariq and Saba had you would think she would rethink the ‘outing’ suggestion so soon again! 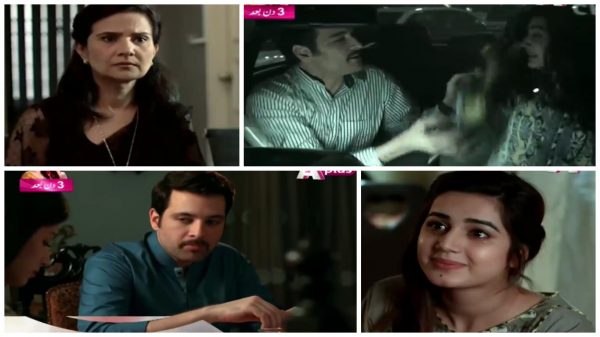 I am still a bit confused about Saba. From what I seem to understand she has a general fear of all men except her father and Shariq but when she is overcome by erratic fits, she can not and will not listen to reason to the extent that nothing makes sense to her. Like the whole policeman scenario was really quite extreme and I could not believe after the ‘hand’ situation in the car she dragged it all the way to begging the policemen to not leave her alone with Shariq. But I will not dwell much on that and suppose maybe that is just what her mental state is like.

Shariq seems to have agreed to do his ‘duty’ but also wants Zoya by his side. Although it has not made much sense having her living in his house so far, it makes even less sense that he should expect her to stay on after his marriage to Saba. His baby names’ suggestions show his emotional state of mind where he has been thinking of names for the baby – with his name as a surname. Zoya seems to be stuck mentally on Azmeer – but her reaction to the news of Shariq’s marriage seems to suggest the beginning of some other emotions.

Seems like we are in for quite a few scenes of Saba ‘ping-pong-ing’ between Sherry Bhai is good guy – Sherry Bhai is bad guy. In spite of that, the hopeful look on Anam Fayyaz’s face when Shariq promises to stand by her no matter what was very heartfelt and spot on.

Shariq seems to want to have his cake -and eat it too. He has agreed, albeit reluctantly to marry Saba but he wants Zoya by his side too. Zoya seemed to be trying to think ahead by saying she wants to go back to work when the baby arrives. The way she had that conversation with Shariq though made me wonder where it was leading – Shariq’s nanny services for baby maybe?!

I can not help but resist pointing out how Sherry Bhais in our dramas are fast becoming Angels in Disguise Potential Miyans. There’s Sherry Bhai in Tum Yaad Aye and now in Intezaar. Anyways, the drama is watchable for now. There is something about Sana Javed’s acting that I can not place my finger on – but it seems to fall flat at times. Mikaal Zulfiqar, Anam Fayaaz and the actor playing Mamu have acted out their characters well. I do like how the drama does not have any extra characters being used as fillers – khair, how many more fillers would be needed with Shariq managing two women in his life already, but still! Anyways, I am interested to see how Shariq plans to manage both these relationships simultaneously – and keep his job in the process!

How many of you watched this episode? Would love to hear your thoughts.