I felt so bad after watching this episode because the sight of crumbling relationships greatly disturbed me and I couldn’t help but recall the time when Zohaib, Arsala, Dua and Khala were one big, happy family- too bad that’s ancient history now!

Needless to say, Hamza spells trouble for Zohaib’s business and we all saw that coming. As much as I am happy that Dua chose to raise her voice against Hamza’s involvement in Zohaib’s business, I have to say that the girl’s just wasting her breath and the time for objections is long gone because Hamza has made quite an impression on Arsala, Zohaib and Khala so what Dua says or does will make little to no difference. Arsala is obviously very sensitive about her husband because on the face of it, Hamza is more or less a perfect husband to her so if I view things from Arsala’s perspective, I think it’s pretty understandable why she can’t stand the fact that Dua is doubting Hamza’s intentions. Arsala and Dua’s once perfect relationship is now strained and as much as this saddens me, I’m afraid that Dua had it coming- she has to bear the brunt of not being honest to Zohaib right when Hamza sent his proposal. Had she been rational that instant, she would have saved herself a lot of trouble because at that time Arsala wasn’t in love with Hamza so the whole situation was not of much gravity but now, Arsala is Hamza’s wife so she obviously loves and cares about him and I don’t think she was being unreasonable today, in fact, I respect her and appreciate the fact that she didn’t insult Dua in front of Zohaib and chose to remain silent because she respects her brother and thus, she respects Dua too and that’s what I like about Arsala- yep, you’ll find her to be brusque but she is sensitive about the people she is close to and knows exactly when to contain herself. And I am soo happy that Arsala asked Hamza to leave Zohaib’s office- it turns out that Arsala’s not a complete airhead after all, lol! 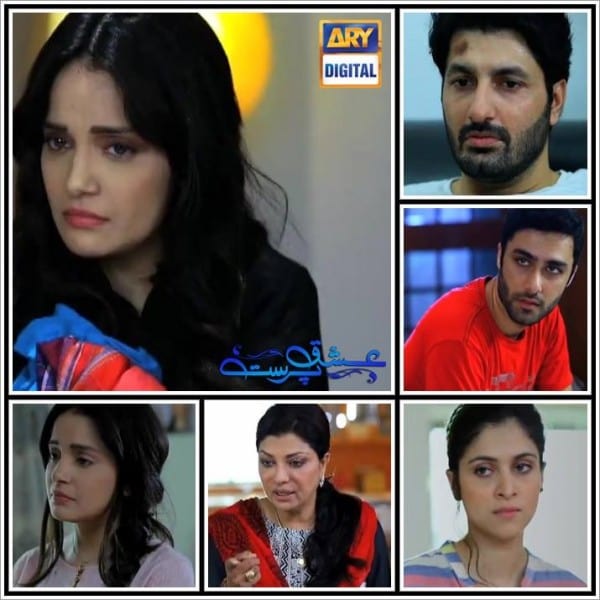 So finally, Zohaib decided to confront Dua about what’s bothering her since so long and I liked his dialogues when he reassured her that she can feel free to voice anything she wants to because he is the last person who’d judge her. I wish Dua had kept that in mind before getting herself and her family into this mess. As sad as it is, Dua and Zohaib’s relationship is missing the spark it once had because after the rape, Dua has distanced herself from Zohaib and quite clearly, like everyone else in his family, Zohaib is also not pleased with the fact that Dua has an issue with Hamza.

I was expecting Pasha Sahab to confront Hamza and that happened in this episode but I actually found it foolish of Pasha Sahab to justify why he married his daughter off to Zohaib because how could he  possibly be thinking that a psychopath like Hamza would ‘understand’ the helplessness of a concerned father? Hosakta hai kay jahan mein khara hoon, wahan kal tum kharay ho aur tumhari jagah koi aur. Uss waqt tumhain andaza hoga kay ek baap ki takleef, usski majboori kia hoti hai. Well, this part of Hamza and Pasha Sahab’s conversation did confuse me a little because I know that karma will get back at Hamza in the last few minutes of the last episode but the situation Pasha Sahab’s hinting at doesn’t seem very likely, does it?

I have now decided that who’s my favourite character from this play- no, not Arsala, not Zohaib, in fact, no one from the leads, it’s actually Asad!! Yep, this guy has been the only voice of reason and I love the way he rebukes Hamza for toying with so many lives. I am pleased that he made an appearance in this episode.

So how many of you are still following the show? What do you think of it? Voice your views!