And ARY has totally lost it! Forget about providing quality ‘family’ entertainment, this channel has messed up its schedule too! According to the new Ramadan schedule, Ishq Parast was supposed to go on-air at 9:30 p.m. but all I saw on my TV screen was an overexcited Fahad Mustafa giving away some prizes so can someone explain why were they showing Jeeto Pakistan when they should’ve been showing Ishq Parast? And last week, Ishq Parast was aired twice a week so I just don’t get it: what is wrong with these people?

Coming to the episode, well, what did it offer, you may ask? A splitting headache! Yep, at this point, things have gone so horribly wrong in this serial that I can’t see it ending anytime soon because it would take ages to set things straight! The last two episodes involved many cringe-worthy dialogues and headache-inducing situations. There seems to be no light at the end of our tunnel and nothing can rescue this play at this point but I just hope and pray that the pace doesn’t go downhill- the last thing I want is for them to prolong a play that has become almost impossible for me to sit through!

So finally, Dua unveiled the truth about Hamza and oh how I wish I could applaud her honesty only if it weren’t TOO LATE!! And yes, Dua, when you say, ‘Mein nay koshish ki thi aap ko batanay ki’, I would like to interrupt and break this to you that I have a sound memory, thank God, and I for one don’t remember you ‘trying’ to disclose the fact that Hamza is your ex! I do remember a bunch of general comments she passed which merely hinted that she is against Hamza’s proposal but apart from that, no, she made no effort to unveil Hamza’s real intentions. I think what disturbs Zohaib the most is the fact that his relationship with Dua wasn’t as perfect as he considered it to be. Zohaib definitely echoed our thoughts today by making Dua realize that she is the one responsible for putting the whole family in such an abhorrently awkward situation. She had the guts to recount her nakaam love story on her wedding night but couldn’t muster up the courage to reveal the truth about Hamza, despite knowing what a gem of a person Zohaib is? This is more of a reason why I don’t feel for Dua as much as I feel for Zohaib and Arsala at the moment. 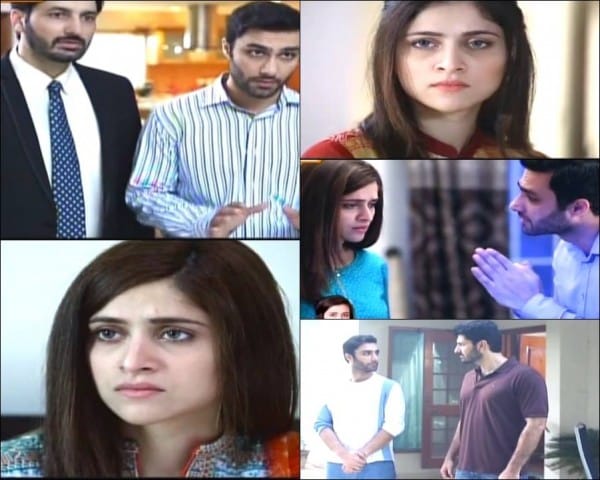 I think  Dua’s I-have-got-nothing-to-lose speech intimidated Hamza for a while because Hamza wasn’t expecting Dua to spill the beans so soon but he went one step further and told Zohaib about what happened when he was at the hospital. They had already destroyed the play with the rape but I’m sure that they must be thinking: agar barbaad karna hai tou dil khol kay karo, so to make matters worse, Dua is expecting too! Aren’t we putting up with enough already? Dialogues like, ‘Yeh dekh lena kay tum bhi baap banne walay ho kay nahe’ are no joke and should NOT be treated that way! I don’t know why on earth this ‘who’s the father’ plot point has become increasingly common in our plays. So much for family entertainment!

Hey, I just discovered that Mohsin Ali, the writer of Ishq Parast, is the same person who penned Mora Piya, a play that went on-air some years back, starring Aamina Sheikh and Adeel Hussain. Mora Piya was an abuse-based play as well, so I guess this writer is known for his bold scripts.

So Zohaib  finds himself torn between Dua and Arsala. He has two options; either he can confront Arsala and let her know about Hamza’s real intentions, or he can zip his lips and allow things to go stay this way. The former would lead to Arsala’s heartbreak and Zohaib fears how Arsala would take this whereas the latter would mean giving Hamza an open ground for further saazishain. Zohaib has got so much to deal with and after watching this episode, I think Zohaib already feels defeated but as much as I understand his mental state, I feel that he should take some action now because his death stare is not affecting Hamza at all. I think Zohaib should be honest with Arsala because she has a right to know the truth about her husband.

I have to say that the person I truly feel for is Arsala! Since the initial episodes gave us quite a clear insight into the relationship between Arsala and Zohaib,  I can totally understand and relate to the emotional turmoil Arsala’s going through right now. She thought the world of her brother and was certain that no matter what happens, she has Zohaib to fall back on but the sudden rift between the two has left her shattered and she feels cheated. Her decision to move out made perfect sense to me and I have to say that Arsala is a changed person now- I can’t even recognize her anymore!

Khaala is greatly disturbed by the latest turn of events because she feels that she failed to play her part as the lady of the house. I think she received undue screen time in the latest episode and I found it very irritating probably because I find Shaheen Khan’s facial expressions and dialogue delivery to be artificial.

I haven’t seen the promo so if you guys have, please share what’s in store for us. Ab kia kia bardaasht karna baaqi reh gaya hai? Voice your views!