I am struggling to find the right words to describe what just happened here, but quite frankly, I am blank! This episode was so difficult to watch that I am not sure how to discuss it. And now that I come to think of it, the four (yes, FOUR! :D) thappars Hamza received were perhaps the only bits that actually made sense and gave me a kalejay-pay-thandak-parnay-wali feeling, but the whole episode was so horrible that I think I am running out of words to express my contempt. All I can think of is: yeh bhi koi ending hui, bhai?

First things first, allow me to rant about Zohaib! Ever since his parents died, he assumed the responsibility of running the household. He was the sole bread winner of the family. And if my memory doesn’t deceive me, he was Arsala’s ammi, abu and bhai – three in one package, right? A man of the house is supposed to make a lot of decisions, but the latest episode convinced me of the fact that Zohaib actually lacks the ability to make decisions, and quite conveniently, he does what other people tell him to do. Khaala asks him to give Arsala her share and lo and behold! Zohaib shows up with a check. When that doesn’t work, Dua, who was definitely the last person I expected to talk sense, actually comes up with the only sound solution: Arsala ko Hamza ki haqeeqat batadain! It is after Dua’s little speech that it dawns on Zohaib: I shouldn’t keep my sister in the dark, I should fetch some khula papers too, and while I am at it, I should think of some clever comebacks to wipe the smirk off my behnoi‘s face because he is outwitting me with his falsafa on ishq, junoon or whatever you call it! The only time Zohaib actually made me proud was when he slapped Hamza, not once, not twice, but THRICE! Zohaib’s thappars were the highlights of the episode and even if you didn’t follow the whole show, I have to say that you shouldn’t miss the three tareekhi thappar!

You might be wondering about the fourth thappar I mentioned earlier on. Well, this one came from Khaala, and though I am proud of Khaala for slapping Hamza, I still have many issues with Khaala and her presence in the play. I think Khaala enjoyed more than her fair share of airtime throughout this play so I would have liked the last episode to be a little less Khaala-centric. Well, let’s just say that the writer and I don’t exactly see eye to eye so this episode had a lot to do with Khaala, and this time around she even recounted her tale of misery – did I mention that I couldn’t care less?

And of course, allow me to rant about Dua! Dua, Dua, Dua – now where do we start? The story started to go downhill when Dua couldn’t bring herself to tell Zohaib that Hamza is her junooni ex. Had Zohaib been one of those typical judgmental husbands, I would have understood, but the fact is that Zohaib accepted her with her past, and always reassured her of his constant support. And in this episode, I was taken aback by Dua’s guts when she began to harangue Zohaib about not supporting her when she needed him. I agree that Zohaib should have been by her side and all, but Dua seems to forget that it’s because of her that Zohaib is in this mess and his sister is living with a rapist, so I think she should have been the one apologizing to him and consoling him. And hey, what’s with the time lapse? I had no idea that she spent a good six months at her mother’s?

If the talaaq kay badle talaaq dialogue, coupled with that check-tearing action was supposed to look ‘cool’ and ‘thrilling’, I hate to disappoint: it wasn’t! I didn’t exactly get the point of that fiasco because the ending didn’t have much to do with it. Zohaib and Arsala had finally made up their mind that they are going to tell Arsala the truth, but they couldn’t utter a single word when Arsala stormed into the house to tell Zohaib off for giving those khula papers? And had Zohaib been sensible, he would have talked to Arsala about Hamza before handing over the khula papers. You see, this is how confusing and clumsily written and handled this whole episode was. 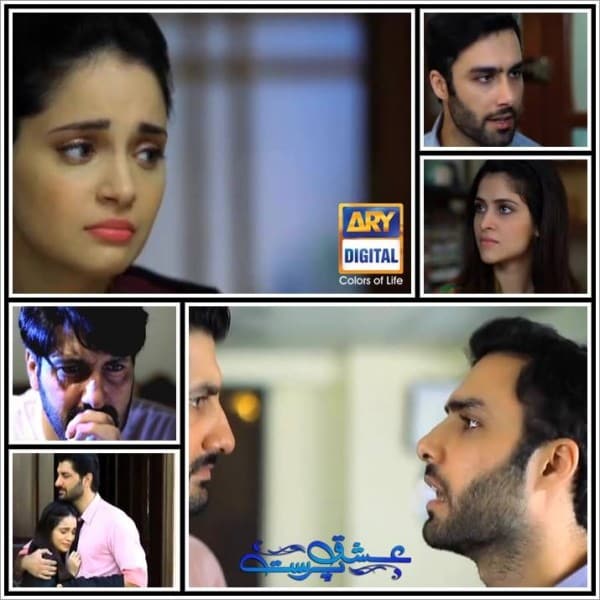 The writer relied on two famous last episode features: a) eavesdropping b) death. I said this about Khaala and I have to say the same about her bhaanji that in logon kay kaan ‘normal’ nahe hain because it wasn’t humanly possible to overhear the conversation between Khaala and Hamza from Arsala’s room. Also, I was left dumbfounded when Arsala didn’t react! I understand that she was in a state of shock because after losing her one in a million brother, the comfort and luxuries of her home, she only had Hamza to fall back on so the revelation that Hamza was using her all along struck her pretty bad, but I was expecting some sort of reaction, what about you guys?

As all last episodes go, the bad guy is supposed to get his comeuppance so Hamza’s death was obviously something I was looking forward to, but Arsala’s death is beyond my comprehension. We are expected to believe that while Hamza claimed to be ‘ishq parast’ which he clearly wasn’t, Arsala belonged to the lot of ishq parasts as well because Hamza was her ishq? If this tragic ending was supposed to strike a chord with the audience and make us shed tears, I hate to break this to Team Ishq Parast that this ending didn’t move me at all – it simply left me with a really bad aftertaste!

Jab insaan kay saaray saharay khatam hojatay hain tou who samajhdaar hojata hai. Arsala’s transition has been convincing and real. When I started watching this play, I was not very fond of Arsala. Spoiled by her doting brother and Khaala, and with no one to admonish her for her eccentric, extraordinary ways, only a few could find that ‘we can relate’ factor when it came to Arsala’s character. It is after Zohaib and Dua’s marriage that I actually took a liking to Arsala. I was thinking that Arsala, like any insecure SIL, would give Dua some tough time, but she actually proved to be a cool and friendly nand. I loved Arsala and Zohaib’s bonding, but needless to say, Hamza’s entry changed everything. On the face of it, Hamza was a loving and sincere husband so obviously, Arsala fell in love with him and couldn’t stand anyone doubting his character. Her decision to move out, managing on her own, and her brother’s apparent aloofness changed her, and the once bubbly, tantrum-throwing Arsala was replaced with someone very mature and level headed. Arsala meant no harm and her character was one of the good things about this play so I wish I could ask the writer what on earth was he thinking when he decided to kill Arsala?

And on this sickening note, Ishq Parast comes to an end. I can’t believe that the characters we’d grown to love were reduced to senseless beings we could barely even recognize. I would like to talk about Hamza’s character here. When I started watching this play, I was looking forward to seeing how Hamza’s character shapes up because our plays don’t usually discuss the plight of people coming from broken homes, so I was thinking that they would show something real and relate-able, something that breaks the stereotypes, but I hate to say that nothing of that sort happened. The least they could do was keep his character grey-shaded; they could show that though he is insecure and aggressive, he is caring and sensitive too. I feel sad that Hamza’s character turned plain evil and had nothing to offer except for dhamkiyan, saazishain, and of course: a splitting headache! 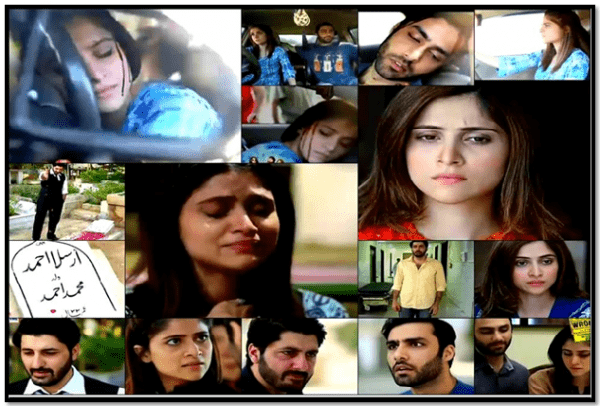 What obliterated this play was definitely the rape. I hadn’t given up on this drama before that because I was hoping that they would show Hamza falling in love with Arsala and letting go of his thirst for revenge, but that one ‘twist’ totally ruined it for me. It’s no news that the subject of rape is becoming increasingly common in our plays. Speaking of the topic of abuse, there’s no doubt about the fact that sweeping it under the rug won’t make it disappear, and it’d be insensitive of the literate lot to turn a blind eye to this glaring reality, but our drama makers must pause and ask themselves: are they raising awareness the way they proudly claim to, or is this subject being embellished to no end? Let’s get one thing straight – you can’t just dish out an abuse-based play in the name of ‘entertainment’. The viewers are not shallow at all, and yes, we do crave entertainment, but that doesn’t stop us from watching dramas that speak about real life, taboo topics because had that not been the case, plays like Pani Jaisa Pyar, Mora Piya, Roag would have failed to garner favorable reviews. Abuse-based plays should ONLY deal with abuse – the physical and psychological impacts of abuse on the victims, how they deal with this trauma, how they pick themselves up and how the perpetrators of this heinous crime are punished in the end. I strongly believe that an issue as sensitive as rape should NEVER be used as a plot point to move the story forward or excite the audience. Coming to the play in question, Ishq Parast was supposed to be a ‘family entertainer’, it was supposed to focus on a bunch of grey shaded characters with their share of flaws and strengths, and it was supposed to make us smile and feel good by the end of the day, but I’m afraid that team Ishq Parast failed their audience.

Talking about performances, Ahmed Ali and Syed Jibran were the stars of the show. I first saw Ahmed Ali in Dusri Biwi, where he played a supporting character,  a junooni, psycho fiancé (how can I forget his trips to the jail). Here again, he played a similar role, and I have to say that he is a talented newbie, especially when it comes to such roles. Syed Jibran was impressive as always. Armeena is beautiful, and she acted well in a few scenes, but her performance, on the whole, left much to be desired. I think she should work on her dialogue delivery and expressions. Arij Fatyma was totally convincing as Arsala, and I loved her performance in the last episode!

How many of you followed Ishq Parast? What do you think of the ending? Voice your views .

P.S: I would like to thank all my readers for their regular comments and appreciation. I don’t know where I’d be without you guys! Sabahet, AW, Hira, Silver Eyes, Kiran Akhtar, Nida, Kunwal Javid, Asma D, Candle, Amirza, Naveed, Sara, Najla Rafique, Roxy, Smmn, thank you so much for being a part of the discussions – the best part of watching Ishq Parast! I thank all my silent readers for following the reviews. Do share your thoughts with us!