Ohkay so, after a million flashbacks & gazillion commercial breaks, this dumber, oh I mean this bumper episode of Ishq Zahe Naseeb marked the end of the drama. There was absolutely nothing in this episode that required them to cover it in double episodes. If they had edited out the flashbacks & had not tried the last time to memorize the entire drama to the viewers, which they already do, this drama could’ve easily ended in a single episode & also had made a bit of an impact. I will not mince my words & just straight out say that the very last episode of this drama was a torture to tune to. They had the very last chance to redeem themselves but it was an opportunity wasted. As much as I do appreciate the fact that it has met a happy ending, the way they took the story to that point was pointless, senseless & absolutely unnecessary. I guess the director & the editors themselves were so much in love with this drama that they wanted to see it all for the last time in this last episode, that is why they decided to add so many flashbacks which did the viewers absolutely no favor. It was like in a pool of flashbacks, there was a bit of story hidden which the viewers had to figure & find out like a riddle.

Few Developments In a Pool of Flashbacks:

Despite the fact that the drama makers had all the time on their hands to give this drama a proper ending, it still seemed abrupt where everyone was finding about everything & they were conveying it to everyone. Saleem got to know about Sameer’s statement that he gave to the police, so he informed his tundi family. Also, Akbar found out what Sameer had done for Gauhar & that he wanted her to leave. Instead of flashbacks, it would’ve been nice if they had actually shot some of the scenes which were necessary like Sameer’s conversation with Akbar.

This episode had two important scenarios to it, the first one being Sameer testifying that he killed Zoya. It was good that Gauhar also spoke to Zoya’s sister & her stance was made clear that she was not going to forgive Sameer but she did understand that his mental condition played a part in what happened with her sister. This had to be covered & it was good that they further elaborated it in the form of a court case & the verdict. Good job!

One of the worst developments in this episode were not only of Sabeeha’s suicide but the fact that she once again left a question mark upon the fact whether Sameer was Shakira’s son or Surraya’s? Like seriously? Just when they had pretty much clarified it by showing a wheelchair ridden lady & Akbar convincing Sameer that she was his mother, along with the fact that Sameer also believed him, they had to confuse the viewers further but honestly, at this point I will just say it doesn’t even matter. It would have mattered if the last episode in general had made an impact but at this point I am just too relieved that it has ended to be thinking about it. I think Rajab Ali must’ve taken Shakira’s child away & never came back. Sameer was actually Surraya’s son, therefore Shakira avenged the supposed death of her child by ruining Ehsan’s son’s mind & personality. Sabeeha’s letter also unveiled Ehsan’s reality in front of Sameer. Probably that was the only purpose it served because so far, Sameer did not really know much about his father Ehsan & the kind of man he was, so Sabeeha let him know. It is upsetting that when they had a perfect chance to clarify everything & just end everything by giving viewers clear cut answers, they chose to make it ambiguous, anyways!

Saleem’s regret, Jahangir’s imprisonment – none of these scenarios were important & didn’t make much of a difference because as a viewer, I was already done with these characters, therefore there was no need to show these two. Once again, the focus on flashbacks & unnecessary scenarios made the last episode lose its impact. If they had edited out all the flashbacks & had just given us a clear cut ending focusing on the current scenarios in everyone’s lives, it would’ve ended the drama on a very high note. The strategy that the director & the editors opted for didn’t really do much & no lies, I actually have a headache listening to the loud OST!

Donia & Kashif’s scenario was tackled decently. However, I still fail to understand why was Donia so shattered upon learning that Gauhar was the girl Kashif was in love with. She knew all along that he used to love someone & was probably in love with her till date, so why did she make such an issue when she found out that it was Gauhar. Donia got a clarification she needed to trust Kashif, not that she deserved one. Gauhar was fully focused on Sameer even before she got married to him & after their marriage, she fell in love with him too which was obvious, so the least Donia could’ve done is not insult Gauhar’s intelligence as well as her loyalty towards her husband, thinking she was cheating on him with her ex. May be things were meant to be this way because it was a done deal that Donia was in love with Kashif & he was not, but there was absolutely no chemistry between Sami Khan & Zarnish Khan. However, they both did their best & gave these characters the best treatment they could. Sad that Kashif’s character didn’t have much to offer but Donia was a decent character, until she became a victim of self-imposed pity!

The Highlight of The Drama:

The final & the best development of this episode; Sameer & Gauhar’s reunion. However, before that happened, it was a huge mistake on the director’s part to shoot Sameer being in jail when the court had already given a verdict that they were releasing him, so why was Sameer still sulking in jail? Anyways, the last scene was iconic & definitely sweet. The poetry was beautiful & it was nice to Sameer in a totally different avatar. A new person, humbled, grounded, someone with a completely different outlook on life, ready for a new beginning. Gauhar was calm & composed like she always was. She had this aura that she had been through a lot but had come to terms with everything & now she could deal with anything that came her way. Gauhar & Sameer’s love story was beautiful. I would’ve liked if instead of showing Shakira & her close-ups, they had shown more of their relationship in the previous episodes because it was special and one of a kind. It was nice to see Gauhar being so selflessly in love with Sameer & Sameer, despite his complexes & fears learnt that someone could love him like that. Zahid Ahmed & Sonya Hussyn looked absolutely beautiful together in the last frame & I think that is the moment that I will keep with me, the rest, the less said the better. 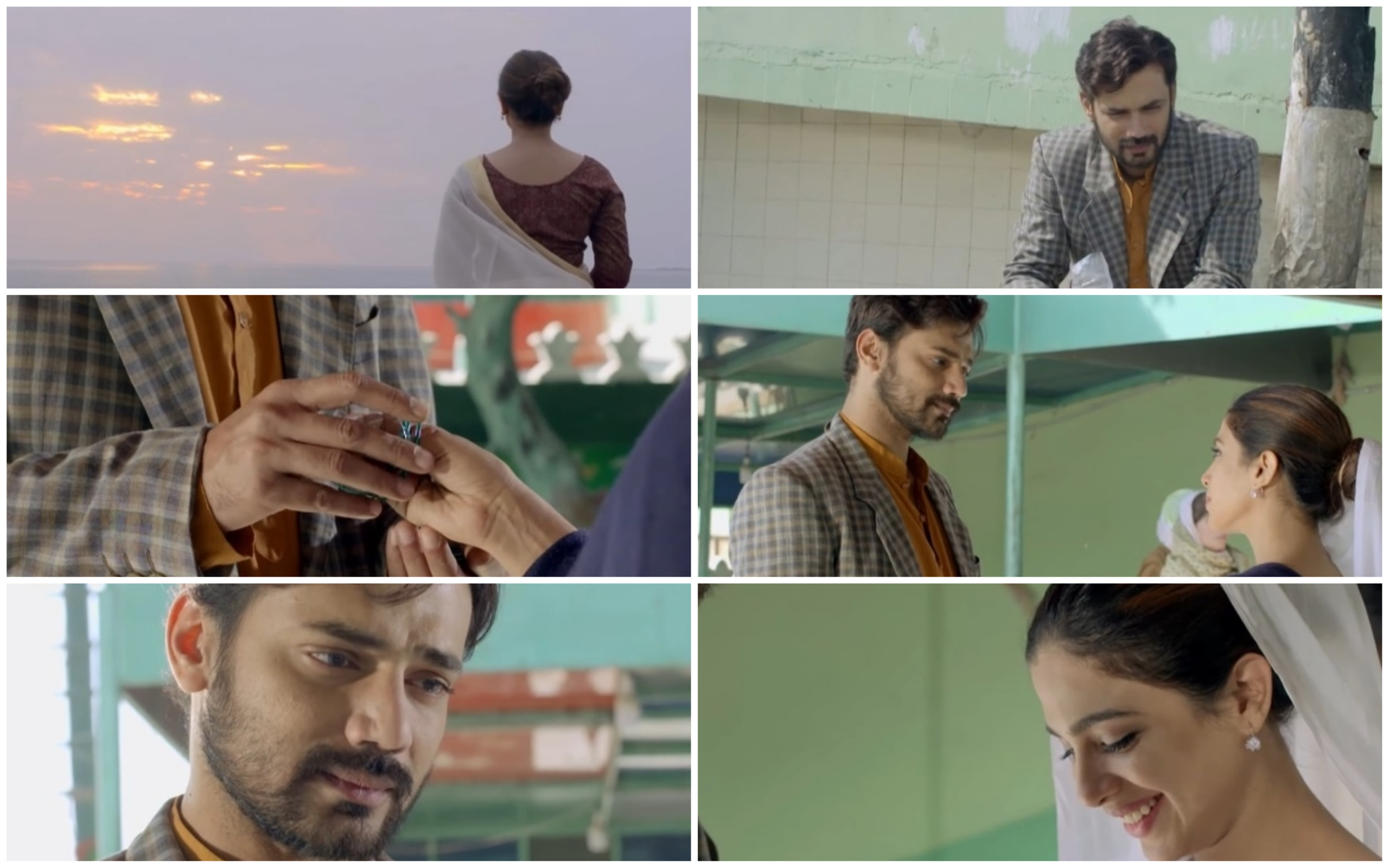 Ishq Zahe Naseeb definitely could’ve been a ground-breaking drama with unique story, brilliant & powerful performances, IF the producers had not decided to stretch it & bring all those changes that they did because it was too obvious that the drama & the story lost its track & charm the moment they took that decision. Although, I do not follow any news about the dramas due to the fear of spoiler alerts but just when I could feel they had made those changes, I was notified by the lovely readers that I was not wrong because they actually did. Adding Shakira’s story & dragging it, unnecessarily long flashbacks, giving more screen time to unimportant characters, not giving enough screen time to the important ones, treating Gauhar’s character as an afterthought & just confusing the viewers with one riddle after another with no definite answer in sight made Ishq Zahe Naseeb lose its charm. It is sad that the drama which could’ve made to the list of best dramas will definitely not score a spot there because of the way it was treated.

Zahid Ahmed; The Star of The Show:

Zahid Ahmed hands down is the star of this show. If it wasn’t for his brilliant acting & phenomenal portrayal of Sameer’s character, this drama would not have received an iota of the viewership because of the way it was tackled in the second half of the drama. Yumna Zaidi was good too but it isn’t her mistake that the director made us hate Shakira’s character by showing her close ups all the time. Sonya Hussyn also did a fairly decent job as Gauhar, she was phenomenal in some of the scenes for sure. Sami Khan & Zarnish Khan also should be proud of themselves for doing justice to these characters. Zahid Ahmed should take a bow for giving the best performance of his career till date & we can only imagine how high his graph is going to go henceforth. Hashim Nadeem really did a fantastic job in exploring this domain & writing on this subject but I honestly feel for him because all the changes that were made were definitely not in his control. This is where the producers go wrong when they get rating-hungry. The director did his part well in the initial episodes where he created the mysterious vibe & played with that element but then everything went downhill quickly. It is unfortunate that the drama which deserved nothing but appreciation was heavily compromised upon. Poor direction and worst editing made this drama lose its charm. and flashbacks are a whole new story. I am glad that the 25 weeks of flashbacks & probably 6 weeks of story has finally come to an end. Also, I think it was a huge mistake on Sonya Hussyn’s part to share the BTS of last scene of Gauhar & Sameer on her Instastories. This is something that I have heard she had done, which I think was the biggest spoiler alert & she should’ve been careful! Anyways, please share your thoughts about the final episode of Ishq Zahe Naseeb, if you’re still awake after 2 hours of dumber, oh I mean bumper episode because like they reinforced throughout the drama; ‘ai re ai, nindiya ai’.

Ps: Thank you all the lovely readers for keeping the discussions alive on Ishq Zahe Naseeb’s thread. Also, I am now going to binge-watch Yeh Dil Mera & will start reviewing it ASAP. :)