This was one of the most emotional episodes of Jo Bichar Gaye since it covered the bitter realities of war in the most convincing manner. The makers showed these realities through the characters we fell in love with in these 12 weeks. Watching Jo Bichar Gaye has always been an intense experience but with time it is getting more impactful and distressing at the same time. It is definitely not easy sitting through this drama since it can be emotionally overwhelming. Tonight’s episode covered a great deal and much of it was one tragic turn after the other.

Tonight’s episode showed the events that took place months before Rumi surfaced. Much of what we watched in the first few minutes of this episode focused on the growing frustrations within the armed forces and the feeling of helplessness that has been there for some reason or the other right from the beginning. Apart from the military aspect, the political aspect of the conflict was yet again highlighted with utmost precision. In this episode as well, the makers made good use of the actual news clips which showed that on the political and diplomatic fronts, Pakistan and India both had completely different stances. This made me wonder why the US was so helpless in this situation since Pakistan was a close ally of the US at the time! The international community clearly did not do much to help Pakistan in the situation. This episode also covered how Bangladesh emerged as an independent state starting from the areas near the Indian border since they were getting a great deal of help from there. While the Pakistani military was completely helpless, these locals with the help of India had more control and confidence than ever. 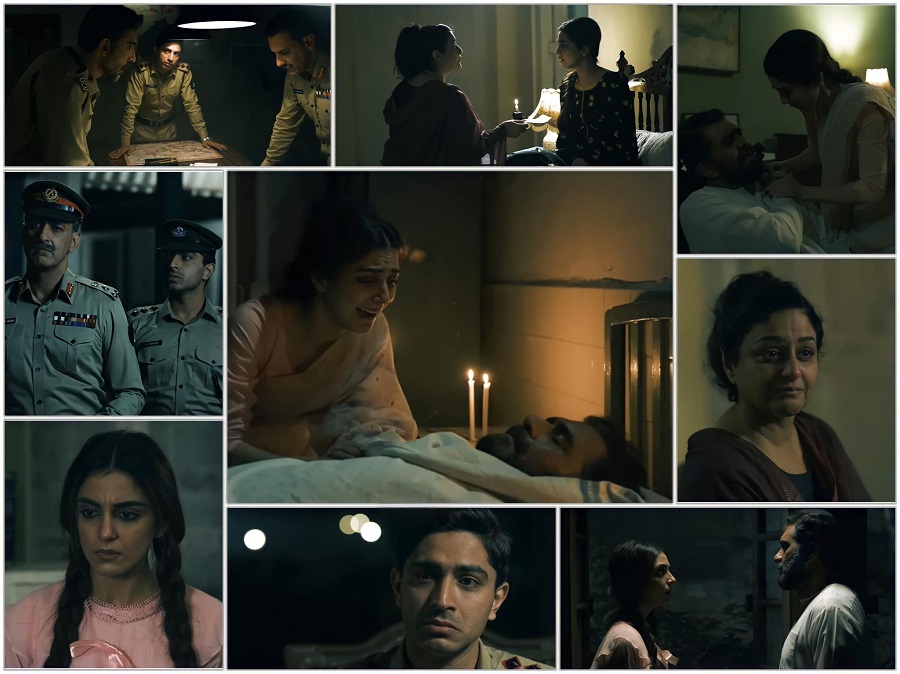 Captain Farrukh’s expressions and his body language throughout have been such a great indicator of the mixed feelings within the armed forces at the time. Even though he is more than willing to do whatever it takes, the uncertainty and the lack of resources scares him. The fearful expressions on his face constantly remind the viewers of how difficult this situation would have been for these military men who were expected to engage in a war with such meager resources. Talha Chahour has done exceptionally well, especially in the scenes showing his character’s emotional, sensitive and vulnerable side. Adnan Jaffar also translated different aspects of his character brilliantly on screen. He understands the situation better than anyone else but he cannot show his vulnerabilities, especially to those soldiers who are putting their lives on the line for this mission. However, his conversations with Farrukh reflected how panicked he actually was.

The personal lives of the leading characters were the focus of attention as well in this episode. In the middle of all the chaos, the makers of the drama intelligently covered the internal and personal turmoil. Farrukh did not think about his own happiness while giving a reply to Sonia’s father. This meeting was penned down and executed so well. Similarly, the scenes covering the emotional burden on Sonia’s family were poignant. These were some of the most emotional scenes we have seen in this drama. Their initial conversations also covered how differently many others felt about the war. I have personally heard such stories from people who witnessed this war and watching dog fights was actually exciting for many! Sonia’s father’s tragic death and her mother’s state of mind depicted collateral damage like no other. The situation at the hospital was another true depiction of the ugly side of war. While for many this war was a means to an end, for many others such as Sonia this was a traumatic experience that led to the loss of their loved ones and they went through the most dreadful experiences. Sonia has for now lost every single family member. Will she reunite with her mother?

Jo Bichar Gaye has managed to shed light on every aspect of this conflict and has done so with clarity. This episode was powerful; there were so many scenes tonight which were extremely emotional. The timeline however was confusing in this episode as well, especially Sonia’s father’s meeting with Farrukh considering the fact that they met for the first time after Haroon’s death in one of the previous episodes. I have to admit that the dates going back and forth tend to be confusing as well, especially for someone like me! Maya Ali’s performance was one of the best she has given in recent times. She breathed life into these scenes and that is why her loss and helplessness were amplified on-screen. The phenomenal performances by the cast make the emotions which the writer wanted to convey to the viewers come alive. The director Haissam Hussain always makes sure that the viewers form a strong emotional connection with his characters and he has definitely outdone himself this time around. This was definitely one of the best episodes of Jo Bichar Gaye.