Ohkay so, this episode of Khud Parast was very interesting. I liked how the story was taken forward with a lot of focus on the characters. Even though a lot is obvious but the writer has skilfully built the curiosity where I want to know more about certain characters. Khud Parast has definitely had a very strong start & I hope it continues to be progress that way.

Further In-sight Into The Characters:

Uswa is spending more time with Adeel. Even though she denies it but it is a fact that she likes the attention that he gives & she enjoys his company. Uswa is strong & clear-headed girl that is why she told Adeel that she was building a friendship with him for now without thinking about what turn it will take in the future. For now Uswa was just having a good time with Adeel & that is where is stops for her. Adeel on the other hand is doing everything, walking an extra mile making sure that he impresses Uswa. As far as Uswa is concerned, her thought process is clear but when it comes to Adeel, things are blurry because we know the type of guy he is, considering the introduction that he got so it won’t be wrong to judge him on that basis, due to which I feel that because Adeel has seen how different & unconventional Uswa is, he has taken her as a challenge. There is a possibility that Adeel might become serious about her but for now, it doesn’t seem to be the case.

Uswa’s mother is pretty clear about the kind of guy she wants Uswa to get married to. Uswa’s mother sees Bakhtawar’s family & Hanan’s proposal as a perfect match for Uswa because like she time & again said, their wealth will outbid every flaw that the guy might have. Uswa’s mother is not even keen to meet Hanan because for her, the fact that he is wealthy is just more than enough. 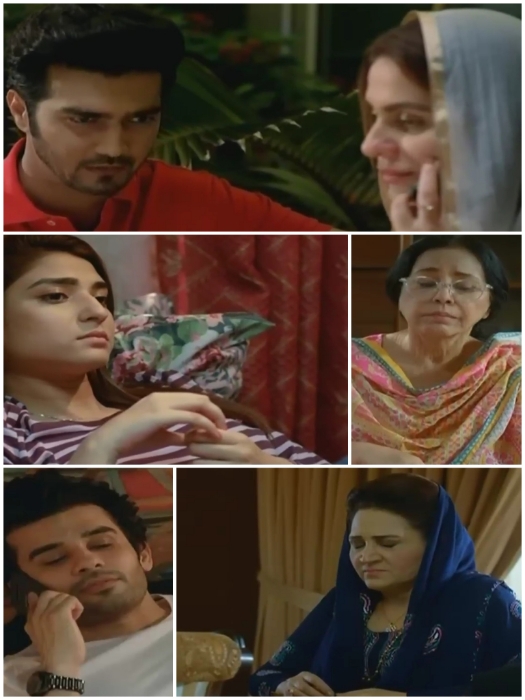 Uswa showed her vulnerable side to Adeel because she was emotionally weak at the thought of Maria’s marriage. It finally struck her that Maria was leaving & Uswa couldn’t stop questioning the entire system where a girl has to leave everything behind. Adeel obviously is not someone who matches Uswa’s mental wavelength, he is just being her friend for the sake of it but it is too obvious that he is not the kind of friend who will respect Uswa’s emotions or feelings.

Hanan’s mother Bakhtawar paid a visit to Uswa’s house only to put forth Hanan’s proposal but she couldn’t proceed as Khatoon Bibi saw Uswa with Adeel on a bike. Uswa’s sisters in law along with her mother did devise a plan to buy Khatoon Bibi’s loyalty & even though that is exactly what happened which made Bakhtawar change her mind but then even Maria was not too happy with the way Bakhtawar’s family was being lied to regarding Uswa. Uswa is not the kind of girl that will fit in Bakhtawar’s family, Maria can clearly see that but their mother is not too keen on what the girls say or feel because for her, Hanan’s financial status is the most attractive & important aspect.

The character that has really made me curious to find out more about her is of Hanan’s sister in law. Like she said, even her parents married her off because they themselves do not have a sound financial background & I guess that is why she puts up with everything because she knows she can not go back. It is too obvious that she is not happy but is only putting an effort to make her marriage work. She really has changed her personality & has accepted everything so that she does not give her mother in law Bakhtawar & her husband Moeez any reason to complain. Moeez is dethatched from his wife, he is cold & distant plus if he ever communicates with her, that is only to remind her that what she is doing is not enough or what she is saying has no meaning. No wonder why Moeez is having an extra marital affair because I feel it is Bakhtawar who hasn’t allowed her son to have a normal relationship with his wife, it could be seen in the scene where she silently commends her son when he scolds & belittles his wife. Khatoon Bibi did draw the right sketch in front of Uswa’s sisters in law, that even though from afar that household might look too grand & perfect, but in reality it is completely the opposite.

Another aspect that was revealed about Hanan was his temperament & the fact that he can not tolerate a lie nor liars. Hanan is definitely someone who is too emotional & has no self-control when it comes to anger. Hanan believes in keeping things fair & square so I am interested to see how he will react when later he will find out that he & his family was lied to in regards to Uswa & her personality. I am sure this lie will play a huge part in how Uswa’s marital life will shape up in the future. However, I will say that considering the kind of rigid person Bakhtawar is who has a very clear picture of the kind of girl she wants for Hanan, it seems unconvincing that after what Khatoon Bibi said & back-tracked, Bakhtawar didn’t get a background check done on Uswa? It definitely was not a big deal for her to make that happen. Also, I liked how Hanan’s sister in law picked up something fishy about Uswa when she heard her Bhabhi but chose not to react much.

Overall, thie episode of Khud Parast was definitely interesting. Even though the scenarios or the characters are not too new but the execution has made things work in totality. I really hope they do not show too much of domestic violence though because I do remember seeing a few promos before Khud Parast went on-air & that was not a good sight. The acting & the direction has been great so far & all the actors have fitted well into their characters. Please share your thoughts about this episode of Khud Parast.