Ohkay so, this episode of Khud Parast was again interesting. Even though people might not agree with what is being shown but the writer has shown the reality in a convincing manner where at times people let their greed get the better of them & they end up taking wrong decisions.

All That Gitters Is Not Gold:

Uswa was sure that she didn’t want to get married just for the sake of it but her sister Maria & mother were on her case. To be honest, I was surprised to hear all the things that Maria said to Uswa because she looked like a narrow minded & backward woman in a modern packaging. Maria tried to entice Uswa by making her think about all the things that a girl dreams of & that was the first time when Uswa actually was forced to think about Hanan’s proposal.

On the other hand, Hanan’s mother is full of contradictions. I wish the writer had kept her a bit positive but it is too obvious that she is going to show religious people in a negative light – which again is a reality but it has become too easy & common for the writers to show that religious people are usually hypocrites. I wish we get to see more such dramas like Shanakht where such a bad image of practicing Muslims isn’t painted. 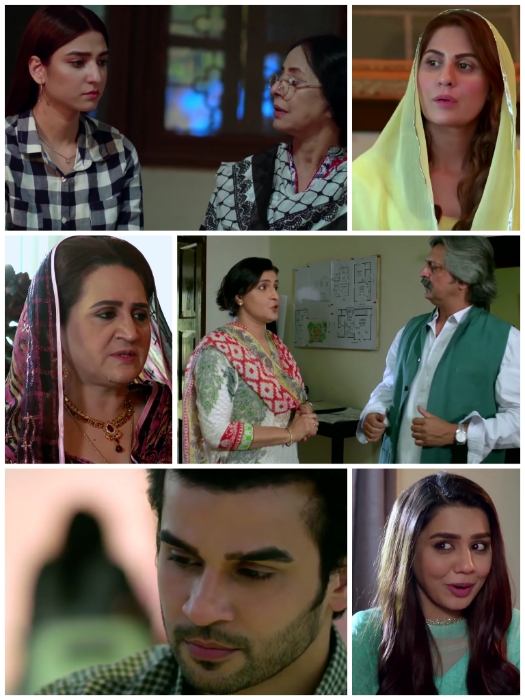 Anyways, Hanan’s mother is a graceful example of hypocrisy where she has a decent list of do’s & don’ts for her daughters in law but thinks her son has all the right to have extra marital affairs & even if he is having one, it is not his fault but the fault of his wife for not having enough attraction to prevent him from doing all of that. Bakhtawar was clear in her approach & let Uswa’s family know what she expects from her but then again, Uswa’s mother wasn’t thinking about anything else apart from Uswa’s luxury laden future.

Adeel has fallen for Uswa but then again, his intentions are still suspicious. I have a feeling that he might cause trouble for Uswa after her marriage because he is that kind of a guy. I thought Adeel’s ex might come in contact with Uswa to let her know what sort of a person Adeel is but Uswa chose to ignore him even without knowing much about him because her family convinced her to say yes to Hanan’s proposal.

Uswa’s mother tried to show her the brighter side while still giving her tips based on her experience & reality that indeed in the beginning mother in law has the control but eventually the daughters in law take over with their dedication, some compromises & sacrifices. That conversation was specifically the one that was nicely worded but apart from that, I was shocked to hear the way Uswa’s mother & the rest of the ladies were selling the idea of wealthy status to her & what shocked me even more was the fact that Uswa gave in & settled for everything even when she didn’t agree with the entire idea of the restrictions that were imposed on her. Oh well, she wasn’t all unique & different that she claimed to be, in the end Uswa also settled for a short cut & deemed getting married to a rich guy the right & the only option.

Even though everything that has been shown so far in Khud Parast is interesting & realistic but I still find it a bit unconvincing that Bakhtawar didn’t get a background check done on Uswa. Also, it is unfortunate that Uswa’s mother thinks Uswa will gel well in that family whereas being her mother, she should have judged the situation better about Uswa & Hanan’s future together. Uswa’s mother is doing the right thing in her opinion but she will later find out that wealth is not everything!

Overall, this episode of Khud Parast was again interesting. I like how the director has kept things simple & straight forward. Oh yes, can someone tell me what is the name of Hanan’s sister in law, like we’re through 3rd episode & she is still gumnaan? Khud Parast can definitely be watched as a good time pass drama because the overall execution is really good & so is the acting & characters. Please share your thoughts about this epispde of Khud Parast.