This episode focused mainly on Noor’s state of mind and his struggles. Also, with this episode two new characters entered the lives of Zain and Mahi who feel attracted towards them and will be a regular part of their lives and the drama now. Mikael’s attraction towards Mahi was quite obvious from at least two scenes in tonight’s episode and the preview of the next episode showed that Mikael isn’t doing all this only for Noor. Kashmala’s track has done-to-death written all over it and it is surely disappointing watching someone attractive and talented like Hira Tareen playing another such character. It would however seem more “normal” watching Mahi and Zain both falling for someone at this point.

In this episode Noor questioned a lot of things which any child his age would wonder about. He wanted to know who his father was and wondered why he did not have a sir name just like all the other kids. Noor’s attempt to give himself a surname was absolutely heart-wrenching. Although his mother and many other people around him gave him so much love but like any other kid his age he is still looking for a father figure. Since Mikael is the only man who is so close to him therefore he looks up to him. Noor’s personality was translated well on screen today, I had no trouble connecting to the issues and questions he had. So far, Mikael comes across as a kind and intelligent person, I am definitely waiting to find out more about him. Aly Khan was the perfect choice for playing this role. Ayesha Khan’s effortless portrayal has also added more life to Mahi’s character. 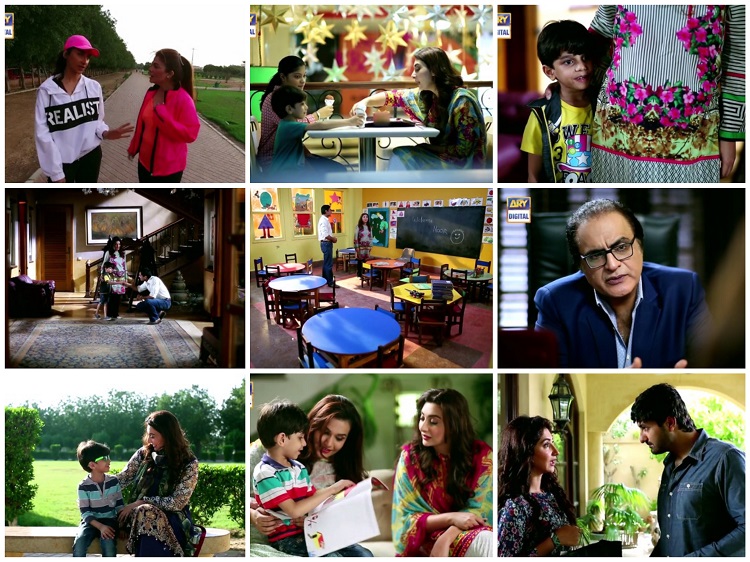 Hassan sahib’s conversation with Mahi was one which we had all been waiting for since most of the viewers were wondering what his “stance” was regarding Noor. Apparently, he feels guilty because he cannot do much for Noor or Mahi because of Arshi but even then Mahi appreciates his “silent” support for her. It would have been nice to see Hassan sahib visiting Noor and trying to stay in touch with him so that he wasn’t completely alienated from that side of his family. Mahi’s support system is one of the best parts of this drama. Sanam, Bubban mian and all the other people who make Mahi feel less burdened and make Noor feel like he is part of a family add something special to this track.

Zain’s state of mind was shown through the flashback scene, his get-up and the dialogues afterwards. Aisha Khan wore the same outfit in the flashback scene as she did on that day, that was a little odd! Zain has not moved on at all but at the same time he finds it impossible to accept Noor. The preview of the next episode suggested that Kashmala will take Zain up as a “challenge” and Mikael will reveal how he feels about Mahi.

This was another interesting episode of Khuda Mera Bhi Hai which covered all the aspects of Mahi, Zain and Noor’s life in an apt manner. After watching this episode I am quite certain that the viewers will get to see Noor’s struggles with even more clarity in the upcoming episodes. So far, this drama has a solid screenplay and all the actors are doing complete justice to their characters. It is good to see Imran Ashraf being versatile; his expressions and dialogue delivery fit the role he has been assigned.