Loved the beautiful and positive dialogues in tonight’s episode, those poignant conversations and all those amazing messages which put things in perspective were a treat to watch. Mahi’s conversation with Noor in particular was right on point. The writer did a splendid job of penning down those dialogues which covered all aspects which were necessary to calm Noor down and give him the strength to go on. Mahi assured Noor of her support, gave him the freedom to choose whether he wanted to live his life as a girl or a boy and also explained to him that there was nothing wrong with him but those people who made him feel like he wasn’t good enough were at fault. This was not just something which a mother said to her child but also an extremely positive and poignant message which is the need of the hour. There are so many people in our society who judge these people, fear them and even hate them. Noor’s reaction to all the positive energy he got from his mother was reflected through everything he said not to his mother in private but confidently in front of every one. This was a truly emotional scene which showed how love and acceptance can change things around. The viewers needed to see more such scenes between Noor and Mahi in the previous episodes as well. The fact that Mikael did not get a lot of screen time in this episode also helped. Noor and Mahi were the centre of attention in tonight’s episode which showed Mahi’s efforts had paid off.

Mahi’s conversation with her mother at the beginning of the episode made the entire situation easier to connect to. This wasn’t an easy situation for Mahi to handle but just like always she managed to muster up the courage to deal with it with the help of her mother. Mahi’s mother is another positive character in this drama, one which we do not see in our dramas very often. She is a role model, she has always supported her daughter and at the same time she is sensitive and accepts her vulnerabilities. Saba Hameed once again has given a phenomenal performance which convinces the viewers that no one could have played this role better than her.

After so many years Arshi decided to let Sanam visit her house but did not accept her whole heartedly. After a long time Arshi’s character was bearable because she did not get a lot of screen time and there was enough positivity in this episode to ignore Arshi’s negative attitude. Arshi has always been controlling and now Kashmala is another controlling person in the house who treats her husband exactly the way Arshi treats her husband. I have to say however that H’s attitude towards his wife is another positive aspect of this drama. He points out whenever he feels that she is not being fair but at the same time he accepts and loves her with all her flaws. It is definitely extremely refreshing watching a man like him accept someone like Arshi without making it look like she does not deserve his love. He has also been there for him when she needed him to support her even when he did not agree with her. 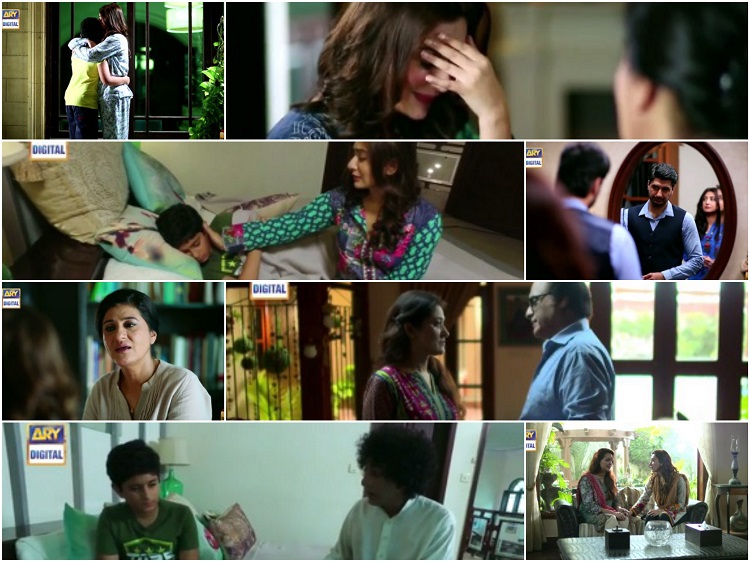 While his father handled and accepted a woman like Arshi quite well because he loved her, Zain is unable to do the same with Kashmala because he never loved her like that. The only scene in tonight’s episode which seemed somewhat out of place was the one in which Zahir calls Sanam to tell her that her mother needed a surgery. It appeared to be an important scene but apparently it was just another conversation. Also, although I liked the fact that this episode focused on Mahi and Noor but Mikael should have been shown interacting with Noor at least once since he was around all the time in the previous few episodes. Also, while Noor was all grown up, Zain and Kashmala did not age at all.

This episode also had some impressive and mature performances to its credit which made all these emotional scenes a treat to watch. It is great watching Aisha Khan outshine in this role. Adnan Shah Tipu is another actor who never ceases to impress and Mariam Saleem is one of those newcomers who is bound to go places.

I loved watching this episode of Khuda Mera Bhi Hai and am anxiously waiting for the next episode. The preview of the next episode showed that Zain still hadn’t accepted his child and Noor questioned his grandmother about his father. I would love to see him meeting his father so that Zain knows how well Mahi did and what he missed out on!

How many of you watched this latest installment? Do share your thoughts about