Ohkay so, this episode of Koi Chand Rakh was alright. It focused more & more on the mental state of all the characters because each & everyone had one thing or the other on their minds. I wonder if this marriage was only bringing sweats & tears with it, why did they all go ahead with it anyway?

As I mentioned last week, Ibrar finding the truth about Nishal & Zain won’t make any difference & he proved me right. Ibrar was engrossed in his thoughts but didn’t even bother having a conversation with Zain. Was Ibrar feeling sad for his son or was he again feeling this sense of pride of that his son respected the promise he made to his friend – that is still a mystery. Also, I am sure Ibrar’s character couldn’t have taken a more typical turn than to have a heart attack as suggested in the precap of next episode of Koi Chand Rakh!!! Yeah right! Ibrar again had the power to stop it all but he chose to become a silent spectator because he didn’t have the courage to explain the truth to those 20 baraati! 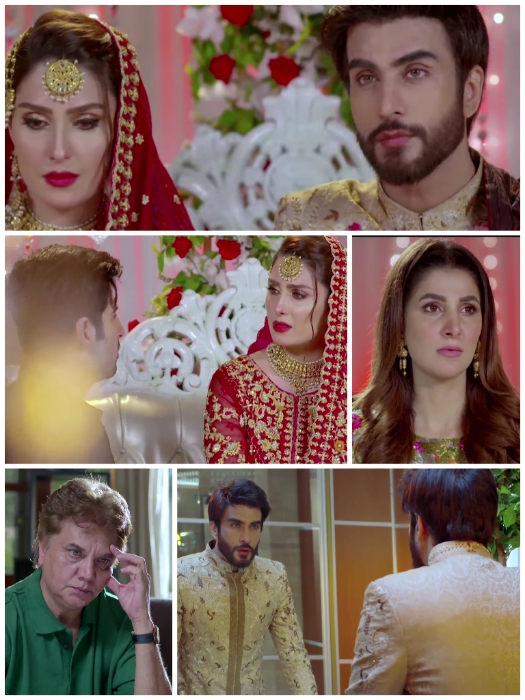 Rabail again spoke to Umair wanting him to take care of his family & coming to terms with the reality. Umair has loved Rabail with all his heart & it is nice to see him respecting everything she says. Obviously it will take time for him to get over & move on but attending the wedding & seeing Rabail go marked a new beginning for him as well. Rabail’s character is the only one in Koi Chand Rakh so far that has been written with clarity & the writer has made her reasons detailed, that is why it is easy to understand & feel for her whereas other characters, excluding Umair, just seem to be reacting without a reason as I haven’t formed a connection with them.

Zain was upset, he was struggling, even though he was putting up a facade in front of Nishal to let her know that he doesn’t care but deep inside he was hurt with the step he was about to take. To be honest, even though enough focus was given to show the rollercoaster ride of emotions that all these characters were going through, I felt a lot more for Rabail & Umair than I did for Nishal & Zain because their falling in love like instant 2 minute noodle was not that convincing for me to feel that they were faced with a biggest hardship in their lives!

Zain & Rabail had a first interaction where Rabail tried to make some promises & Zain showed her his real face. Zain will continue to compare Rabail with Nishal all the time & that is why he chose to walk away from her as he couldn’t get Nishal out of his mind. Again, my point remains, if he had mustered up some courage before, to beshak ye drama na banta lekin ye sab bhi na hota, lol!

Overall, this episode of Koi Chand Rakh was alright & there was not much that was shown because a lot of focus was on rona dhona again. The only good thing about this episode was that we didn’t get to see much of Nishal as she was hovering in the background. Anyways, the preview of the next episode did seem typical but interesting, I say typical because after seeing his father’s condition, Zain will have to deal with Rabail in a civil manner, let’s see how things roll. Please share your thoughts about this episode of Koi Chand Rakh.