So I had been praising this drama from being free from cliché situations or scenes and while for the most part it continues to be entertaining these two episodes had their fair share of typical dialogues and situations which moved the story forward same and also made it run round in circles like a cat chasing its tail.

Aina as we had earlier established has become manhoos Aina. Before I get into this drama, what is with this constant manhoos aurat scenario? It is in some form or the other in the dramas but so many names such as Kambakht Tano, Bechari Mehrunissa, Mariam Kaisay Jiye – I mean seriously what makes anyone think people may jump to watch a drama named like that? Or do they?

Anyway, back to bechari and manhoos Aina. Sajal has become seriously sari huee jal !!- I am not sure if this is the same mild natured, loving sister we were introduced to in the earlier episodes. Yes, Aina’s news gave their mother a lot of grief, yes she died, yes Sajal had her rant and blame game full force but really how long does that last? Aina had been selfish but she has learnt her lesson and when Sajal and Faraz take her to Islamabad I would have thoughts things may become to settle. Firstly, I do not get why they had to keep up with the farce in a new city. Why not just introduce Aina as the divorced and pregnant sister and get on with settling in a new city and meeting new people. Khala had made Faraz promise he would keep things to himself but she has assumed that Imran was ready to accept Aina and the baby and now that things had clearly spiralled out of control, common sense would be to tell Mohsin the truth and then take Aina with them to Islamabad. I was given the impression there was no other family and as for what society thinks, well then I guess that is what Sajal took to heart a bit too much for she could have stuck to her story of Aina being divorced and pregnant and just moved facts around a little such as saying after her mother’s death they did her nikah without a lot of fanfare etc, Man, I feel they should have consulted with me how to handle this, LOL! 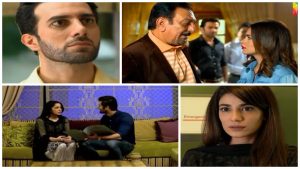 Well, between Sajal constantly spewing venom and Aina constantly taking it all with a lot of patience, Sajal does get pregnant and loses her baby. I think the change in Faraz’s character has been brought on by the baby where I could still understand that he was more concerned about his own child than Aina and very happily accepted Aina giving her child to Imran’s parents. Mohsin with his bobbing head and quavering voice has cut off ties with everyone and although I felt bad for Nadia for taking the brunt of his anger it seems he does possess a gentler side which has appeared with news of Nadia expecting twins herself.

Imran’s mother’s conscience tagged along with her all the way to America and she finally told Imran the truth. While Asad Zaman Khan’s acting in that scene was really good, the way the situation evolved after that was insane. When he asked his mother for the number I thought oh no, she left her phone in Karachi, oh no she will slip when she gets off that bed to fetch her phone but no she manages to give Imran the number only to have the housemaid tell him madam has lost the baby and he assumes it is Aina and that is that! Uff! I was curious to be honest to see how things are between Aini and Imran now but there was not much save a couple of scenes which did not really tell us much except Aini’s amusing statement where she says to Imran’s back, ‘jahanum mein jao’- little knowing (or not acknowledging) – he is already in a living hell.

One thing that bothered me about Aina was her statement to Faraz and Sajal about how she wanted to give birth so that the child may grow up and question his/her father. Really? There was no outburst of how she could be expected to kill her own baby etc – except the wild look in her eyes as she explains why she wants to have the baby and I thought oh wow, really? I was a bit taken aback also at how casually abortion or the concept/thought of it was treated in these two episodes, firstly with convincing Aina to go ahead with it and then Sajal announcing the same only to save face from society’s prying eyes and comments when nothing illegal or immoral had happened. I am not judging the concept of abortion here, rather how casually it was used for it is not a seemingly common jump – to solution in the families in our dramas.

Sajal’s constant mean comments and wallowing in self pity are getting a bit irritating and ridiculous and I hope there is an end to all of that soon either with her realizing she needs to stop being mean which does not seem likely or Aina leaving their home. I found Naveen Waqar acted well and while I wish she and Emaad Irfani would rely a little less on eyes widening to uncomfortable proportions, she has managed to make me relate to her character. I have not watched any drama with Asad Zaman Khan in it but I can safely say I would definitely be interested to see him again. With so many characters intertwined with each other and each having a story to tell, the drama is far from boring but I do hope the focus moves away from Sajal now. What did you all think of these episodes? Would love to hear your thoughts.