Finally, with this episode, MasterChef Pakistan has come to an end. It was a tough fight & all the contestants made sure they raised the bar high. All the finalists; Ammarah Nouman, Madiha Khalid & Gulnaz pushed themselves really hard to fight for the title but only one could win it. The Grand Finale episode was good & I couldn’t wait to find out who has won.

The challenge was pretty simple with no rules whatsoever. The finalists got a leeway of creating 3 course meal in 3 hours with an open pantry. I thought they would be asked to have a certain theme flowing in their menu but none of that was included in the description when the judges gave the briefing about the challenge. However, the dishes were good with some amazing plating that we got to see.

The dishes that the contestants served & the comments that they got are:

Entrée: Grilled Prawns w/ Pumpkin Salsa. Chef Mehboob felt that the salsa should’ve had a bit more seasoning whereas the prawns were cooked perfectly, they were juicy & succulent. Chef Khurram liked the presentation of the dish & also felt that the prawns had a very nice flavour however, the salsa lacked seasoning. Chef Zakir liked the dish on the whole too.

Main: Dumpukht Chicken w/ Ratatouille Vegetables. Chef Mehboob liked the fusion of traditional chicken with the French veggies. He felt that they were cooked just rightly where they weren’t under or over cooked. Chef Khurram liked the taste, the texture & the colours that the vegetables had. Chef Zakir felt that the usage of vegetables in this dish took it to another level where the juices of all those veggies went really well with the chicken.

Dessert: Mamul Joz w/ Chocolate Ganache. Chef Mehboob liked the presentation & he felt that she gave a new dimension to the local sweets with the usage of coffee because no one uses it that way. Chef Khurram liked the tastes that coconut, honey & coffee gave but he felt that the walnut was overpowering it & made it a bit too strong. Chef Zakir liked the plating of the dish.

Entrée: Crumb Fish Fried w/ Tartar Sauce. Chef Mehboob felt that the fish wasn’t smoked enough as it should’ve been but the fish on its own had a very nice flavour & it was cooked beautifully where it was moist. Chef Zakir liked the fish as well & felt it was cooked perfectly & had a great taste. Chef Khurram felt that the salsa was a bit too oily considering the portion size.

Main: Singaporean Rice w/ Hot Sauce. Chef Mehboob liked the flavour of the sauce & also the veggies but felt that the chicken was overcooked & a bit dry. Chef Khurram liked the texture of the rice & also the sauce but felt that the presentation wasn’t MasterChef quality. Chef Zakir felt that he could name this rice as vegetable fried rice as according to him, they weren’t Singaporean at all.

Entrée: Couscous Mango Salsa w/ Grilled Prawns & Chilli Sauce. Chef Mehboob liked the salsa a lot & felt that it had some fresh colours & it was very light. He also liked the prawns & the sauce. Chef Khurram liked the presentation & felt that the portion was perfect as an entree dish but he found the sauce a bit too sour for his liking. Chef Zakir felt that the usage of avocado took the salsa to another level because it balanced the flavours really well.

Main: Pan Fried Salmon w/ Orange Sauce. Chef Mehboob felt that the fish was cooked to perfection as it maintained its shape, yet it was moist from the inside. He liked the usage of asparagus & felt that they were cooked perfectly however he had an issue with the sauce as he felt that flavour of honey was dominant in the whole sauce. Chef Khurram felt that the consistency of the sauce wasn’t right & it wasn’t as thin as it should’ve been. He found the potatoes a bit tasteless & slightly undercooked however he liked the fish fillet a lot. Chef Zakir liked the usage of crushed black pepper on the skin because he felt that it gave a new flavour to the skin as it was pan fried properly.

Dessert: Brownie w/ Cream Cheese Frosting, Raspberry Sauce, Chocolate Mousse & Nut Crumble. Chef Mehboob felt that the chocolate mousse along with the nut crumble was exquisite. Chef Khurram liked the sponge of the brownie but felt that the usage of sugar in cheese cream frosting made the dish a lot sweeter. Chef Zakir liked the presentation & the usage of colours on the plate. He also liked the nut crumble in the chocolate mousse & felt it balanced out the flavours really well.

It was now time for the final announcements but the judges had some great surprises in store for the finalists. First one was the announcement of the prize money that all three of them will get, which was a very good idea & just the right way of acknowledging the finalists & their efforts. 2nd runner up was to get get Rs. 0.5 Million, 1st runner up would get Rs. 1 Million & the prize money for the winner was Rs. 5 Million. After that announcement the finalists got another pleasant surprise & that was their reunion with their families. It was good to see the support they got from their families & I had a huge smile on my face seeing Gulnaz’s husband & Ammara’s husband supporting their wives. Finally, Gulnaz’s husband had good news to tell that the people in Chitral were showing great response to Gulnaz’s decision of coming to MasterChef & they were proud of her, which is good. 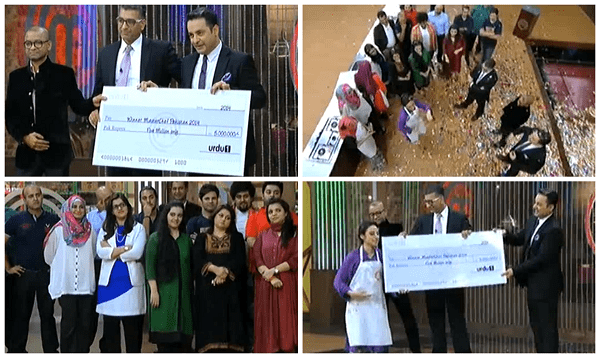 So, it was now time for the final announcements. 2nd Runner Up was Madiha Khalid, 1st Runner Up was Gulnaz & the well-deserving, the most consistent & the perfect contestant who won the Title of First Ever MasterChef Pakistan was Ammarah Nouman. I think this result was an icing on the cake. The season on the whole was enjoyable with a few hits & misses but the note at which it ended makes it a memorable journey. I am extremely happy at the decision taken by the judges but then again, Ammarah’s food spoke volumes about how good it was. Really proud of Ammarah Nouman & I congratulate her & wish her good luck. Share your say on her win & the grand finale episode of MasterChef Pakistan. 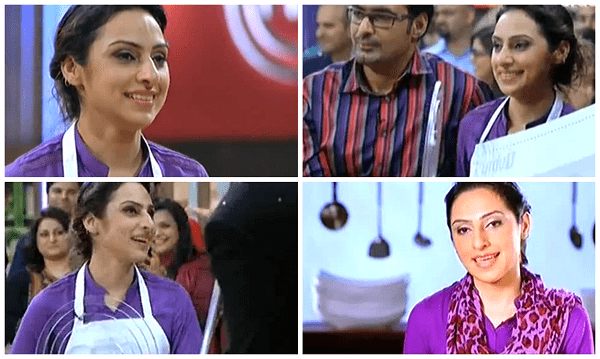 In the end I would like to thank all the dear readers who appreciated my efforts & liked the reviews that I wrote for MasterChef Pakistan. Just wait for a little while & you’ll be seeing an overview on MasterChef Pakistan in a couple of days. :)

ps: Since it’s my last review for the week, so I am wishing all the dear readers ~*Eid Mubarik*~ in advance. :)