This drama is getting worse with every passing episode. The viewers have been watching Sadaf and Hira suffering, compromising and crying right from the first episode, 19 weeks of watching these women worrying about one thing or the other has been torturous enough and now when the drama should be wrapping up we see Hira contemplating a reunion with Ameen!! Just like every other silly step Hira took this time around too her reasons are very clear. She has always enjoyed playing the qurbani ka bakra and this time around a child is involved too therefore she has all the more reason to play the savior. Hira will do anything to save her sister’s marriage and ensure that her child has a father when he comes into this world. Don’t any of these characters have any common sense? Shehryar is Hira’s father too, what good did that do??

The confrontations between the two wives who were Phupo and Bhatiji not very long ago were nauseating. All these scenes had star plus written all over them! Dialogues like Shehryar ke bete ki maa mei bano gi were sickening. Is Shehryar really worth fighting over? Shehryar is not even willing to own this child but Sehr is bent on staying in his house to make sure that her son, who we are not even sure exists gets his due share in his father’s inheritance!! Although Sehr is going through hell but her make-up stayed as loud as it has always been all through tonight’s episode. Now only if our production houses would spend as much time and energy in finding good script as they do in making these dramas visually pleasing. 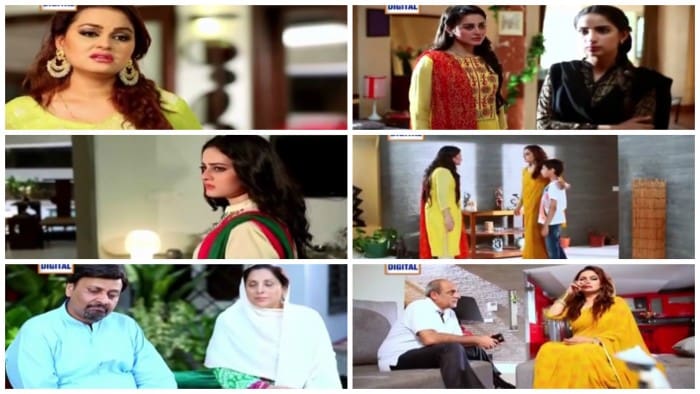 The lighting in this play is always perfect, the colors are beautiful and the make-up is always in place but other than that this play has absolutely nothing to offer. It is full of women who keep on making one stupid decision after the other and although the writer has tried to make Hira look like the ideal daughter and sister but she comes across as a very dim-witted person who can never take the right decisions. It is sad to see legends like Samina Peerzada, Sajjid Hassan, Salahuddin Tunio and even Waseem Abbas wasting their precious talent by being part of a drama that has absolutely nothing to offer. I have lost all interest in this drama, watching it is a pain and I cannot take anymore of Hira’s stupidity! I am certain that any viewers out there who felt something for some of the characters must have given up by now too.

How many of you watched this latest episode of Beqasoor? If you didn’t watch it, you did yourself a favour:) And if you watched it then please feel free to vent out!!