The developments in this episode were quite predictable since the preview of this episode pretty much summed up what was going to happen next but even then what I enjoyed the most about this episode was the attention to detail. Although some of the scenes were very long and this wasn’t exactly a fast paced episode either but every scene added something to the story. I didn’t feel like the scenes were being prolonged unnecessarily but it felt like everything that was being shown needed to be seen by the viewers. Surraya’s mother’s desperate attempts to make her daughter sneak out of that room and the pressure from her husband to leave her there was shown very convincingly. She couldn’t wait for Surraya and even after all her attempts she could get her out of that room and as a result Surraya was abandoned by her parents.

Jharna’s maternal instinct instantly took over when she found out that Surraya had been abandoned by her parents. Surraya is the kind of girl who is very adaptable as long as she is in an environment in which she gets what she wants and with the support of Jharna she will have no problem settling in that house. The most important development in this episode were the growing differences between Jharna and Farhad. In the last episode as well the viewers were given subtle hints that Farhad’s first love was his work but Jharna’s priorities had completely changed. Farhad wants Jharna to help him in his work but Jharna’s main focus of attention are her kids. I must say that I had absolutely no problem relating to all the characters and what they were going through in this episode as well. The problems between Farhad and Jharna are the kind of issues that exist in many marriages. Farhad feels left out because Jharna does not have the same priorities as him. Farhad’s assistant’s conversation with the man who came to his office also went to show that Farhad fell in love with Jharna’s talent and her position in the film industry. 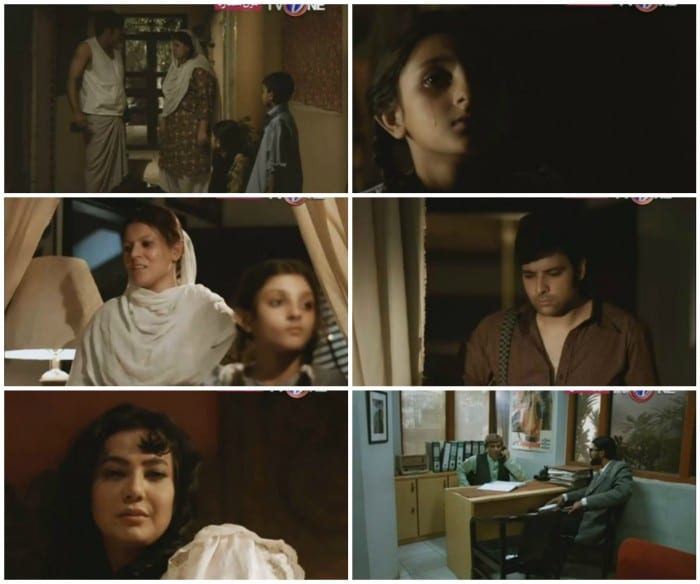 Farhad has been shown as a practical person who is very passionate about his work and Jharna comes across as someone who believes in giving whatever she chooses to focus on her best. At one time the film industry was her primary focus therefore she did everything she could to make her place there. Now she feels that her house and children should be her primary focus.

I am waiting to find out if being abandoned by her parents effects Surraya’s overall personality once she grows up. Surraya was always a misfit in her family, she will definitely get the kind of life she wanted if she stays with Jharna but will that life make up for the absence of her family? It is truly refreshing to watch a drama in which all the characters are superbly etched-out. You can’t help but connect to these characters immediately and want to find out more about them. The preview of the next episode showed a grown up Surraya well settled in Jharna and Farhad’s house. Jharna will be a mentor to Surraya. Jharna’s character is very likeable, while I understand her priorities but at the same time I had absolutely no trouble relating to Farhad’s feelings as well.

The little girl playing Surraya was the star of the show tonight. She nailed every single scene. I love the way the director showed Surraya’s obsession with films and film stars yet again! The way she cried while watching the last scene of Mughal-e-Azam was one of my favorite scenes. Once again while watching this episode I felt like I was transferred to another world. So far it seems like Mein Sitara will be one of those very few dramas with a very well-thought-out script. The director has done complete justice to the script by giving it a completely different feel mainly due to the attention to detail. She has also managed to extract some memorable performances from all the actors involved in the story so far. This episode of Mein Sitara just like the last one was definitely up to the mark and I am still very convinced that this drama will have something different to offer to those viewers who are sick and tired of watching run-of-the-mill stories.

How many of you watched this episode of Mein Sitara? Don’t forget to share your thoughts about it. If you missed it, watch it on http://www.dramasonline.com