Yousuf’s love story took a serious turn in tonight’s episode and it also became obvious that Zulekha does not feel anything for Yousuf, not even sympathy. Yousuf confessed that he knew that Zulekha did not even like him but loving her was not in his control. Zulekha’s sister’s character provided the comic relief which I am sure all of us needed tonight. I must say that her dialogues and her character is turning out to be extremely interesting.

Khandan ki naak lrkiyu k dil se kyun juri hoti hai! Everything that Zulkeha said to Imran Mugheez was music to my ears but apparently Imran Mugheez is nothing like Ali Hamza. The whole family was quick to judge Zulekha but no one questioned how wrong they were in getting this girl married to someone she was not even interested in. Girls in our society get married like this every day but no one questions these arranged marriages which do not include the consent of the girl. Zulekha is a girl on a mission but like she mentioned she does not want to see her father losing either. She is not doing this because she wants to hurt her father but she is doing this because she does not want to marry someone she does not like which sounds very plausible. Khala’s sudden change of heart was also an interesting development in the story! The dialogue ” khala chahey saagi hi kyun na ho bhanji ke character pe compromise nahi kr skti” was hilarious. I think the writer has questioned many of the norms of our society through these witty and fun dialogues. Many dialogues like this one are funny but ironic at the same time. 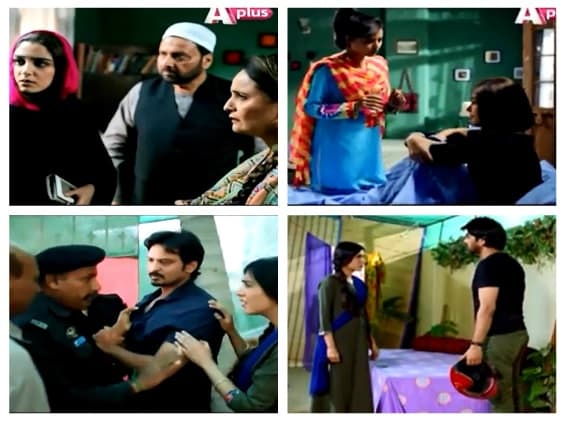 Yousuf’s father might be liberal but even he considers Yousuf’s love for Zulekha madness. He most certainly would have liked it if his son married someone he loved but if the girl does not love him back and she is getting married in a few days then he is definitely not going to allow Yousuf to indulge in such fantasies. Behroze Sabzwari has always been a very convincing performer therefore he had no difficulty in portraying the “other side” of Yousuf”s father. He showed that he is quite capable of telling his son off when it is needed.

Noor Mohammad is proving to be a big hypocrite. He won’t allow his daughter to have a say in her marriage but he thinks it is okay for him to have an affair and even get married to someone secretly. Noor Mohammad comes across as a very selfish person who wants things his way.

I am glad that Daa Ji found out today that Madiha has been talking to Yousuf and I want to find out what he does with that information. Madiha does not want to be involved in Yousuf’s love story in any way for obvious reasons. There wasn’t much of Madiha in tonight’s episode but I am really looking forward to seeing more of her.

This latest episode moved the story to the next level; Yousuf’s secret is out and so is Madiha’s. Just like all the previous episodes of MNYH this one too was directed very well. I must say that tonight’s episode belonged to Imran Abbas; he owned his character every step of the way. Yousuf might not be a brilliant student, he does qualify as a “lofer” too but he is innocent and genuine. Will Zulekha ever be able to love Yousuf the way he loves her? It seems most unlikely at the moment.