The most gratifying part of this last episode of Meri Guriya was the verdict and its execution. This verdict gave a clear-cut message which is the need of the hour. This is exactly the way a serial killer and a rapist should be punished and this isn’t something we get to see in our dramas very often.

Having said that, the overall narrative tonight was exceptionally weak. The reason why the verdict and the atmosphere in the courtroom had an impact was because of the way the story was taken forward for all these weeks. The court’s proceedings were stretched and some of the parts were laughable. The role of the judge in a trial which was not only extremely serious because of the nature of the crime but also the hype attached to it, was absurd! The weakest scene was the one in which Dabeer’s lawyer declared that he was in fact mad and the judge went along with it until Safina came to the rescue. It was understandable that Samreen was under pressure and could not testify against her brother but later on watching her sit with Shehnaz and not formally apologizing was strange! Shehnaz’s dialogues in the court scenes were touching but they would have been even more poignant if they were not prolonged unnecessarily. Also, Shahmir’s absence from the trial stood out like a sore thumb throughout. Last but not the least, the DNA result came in the end! The DNA test result should have been evidence enough for the court to make a ruling especially because Shehnaz and Safina had to fight a long and hard battle to get it done. The trial was the weakest link in tonight’s episode but the outcome was definitely powerful. 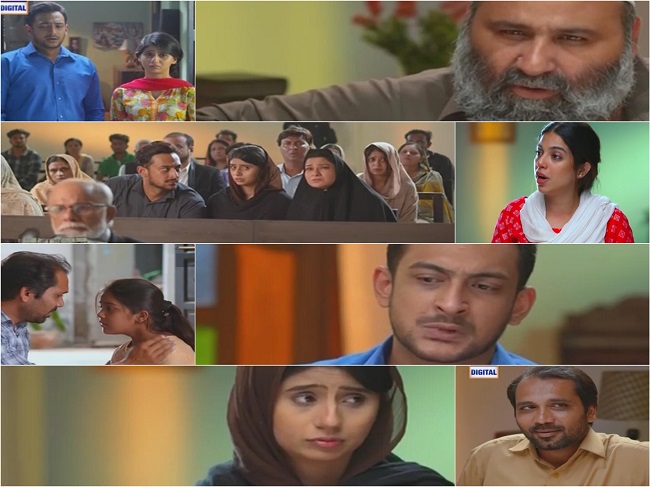 The way Rab Nawaz had a change of heart was too sudden and not the least bit logical! The most funny bit was when he “Paused” in the middle of a murder to attend a phone call. This development could have been covered much more convincingly since this ending was pretty much stretched without a reason. Similarly, daadi was apologetic all of a sudden and that was it! She got so much screen time and the viewers were never given the hint that she was supporting Dabeer because she thought he was innocent. Same was true for the change in Dabeer’s mother’s stance, she wanted her son forgiven even if he was guilty – that was her stance last week – but tonight suddenly she accepted the verdict so wholeheartedly that she even went to witness Dabeer’s hanging! This was another aspect of this episode which was impossible to connect to. 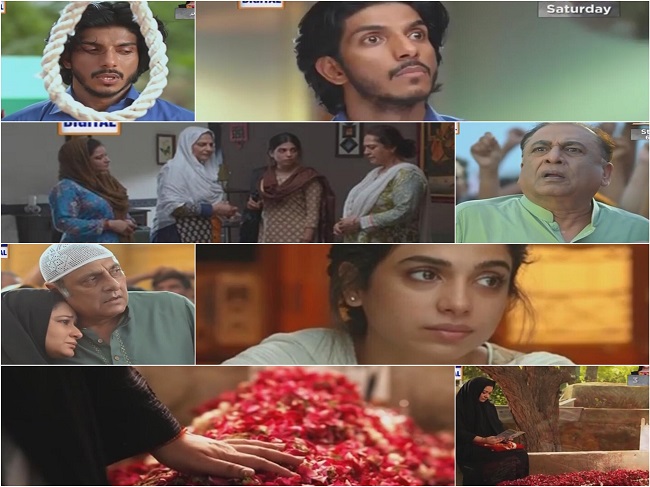 Most of us wanted to know why Dabeer turned into such a monster especially because some of the dialogues suggested that while growing up he was never like all the other children. I was thinking that maybe Dabeer had some awful experiences in his childhood and these experience perhaps in some way involved Abida’s grandfather but there was no such background. Showing or explaining the reason was surely a difficult road to take since very often our writers have turned rapists into victims while attempting to do so therefore I understand why the writer decided to skip that part. Dabeer’s ending was the most powerful and upsetting thing we have seen in our dramas and the message it sent is one which needs to be heard.

Kudos to Mohsin Abbas Haider for taking up a character which was pure evil and nailing it in every single episode. Mohsin Abbas Haider’s award-winning performance was right on point throughout. His expressions tonight were priceless. Sania Saeed’s character and her acting in this drama was absolutely brilliant. It was great watching Sonya Hussyn play a character which was strong and positive. She breathed life into Safina’s character and made it even more likeable. I would love to see her experiment more in the future too. Faris Shafi’s portrayal of Yawar was superb too right from the get-go. Although, the entire cast of this drama acted superbly throughout but in this episode few of the supporting characters were over-dramatic. Also, showing exactly what the DNA test results were in the few scenes showing what was going to happen after the commercial break was ridiculous.

The execution overall was okay but the background score in the last scene did not compliment the situation which was being shown. The script was the weakest tonight because many of the scenes were repetitive and the court scene in particular was not convincing. The ending however was superb.

Meri Guriya was an extremely upsetting and powerful drama which kept the viewers coming back for more. It highlighted an important issue and had many important messages for the victims’ families as well as those who are at the helm of affairs. The last four episodes however were stretched and were not written as impressively as rest of the episodes. It was a pleasure reviewing this drama, it always kept me glued to my television screen and the performances in particular were amazing! A big thanks to all those people who read the reviews every week and contributed to the discussions.