Directed by Ilyas Kashmiri and produced by Momina Duraid and Sateesh Anand, drama serial ‘Mol’ is based on the story put forward by Faysal Manzoor Khan while the person behind the screenplay is our very own Amna Mufti. I was pretty excited about Mol for a couple of reasons. First off, I am a fan of Naveen Waqar and after her convincing performance in Humsafar, I wanted to see her playing the lead role in a quality play. Secondly, seeing Faisal Qureshi on HUM TV after quite some time is indeed a breath of fresh air.

From whatever I could glean after watching the introductory episode, I’d say that this play definitely has some headstrong and interesting characters to offer but the story itself doesn’t seem to be a far cry from the ones we see on our TV screens very often.

So the female protagonist of the play is Emaan (Naveen Waqar). Emaan’s a headstrong woman who has an allergic-to-pretenses approach towards life. She strongly believes in love but is certainly not waiting for her Prince Charming! Emaan works for the welfare of special children because she is a compassionate individual who believes in making a difference and that’s probably why I instantly developed a liking for her character. One more thing about Emaan is that she always has a definite opinion of her own and never shies away from voicing it.

Emaan’s family consists of her mother and father, Imtiaz (Munawwar Saeed) and sister, Nazia (Minaal Khan). They are happily settled in Sukkur. I would definitely commend HUM TV for not sticking to Karachi and the fact that they are exploring different areas of Pakistan is indeed refreshing :).

Then of course we have our hero, Sheheryaar Hassan (Faisal Qureshi). He is an independent man who lives by his own code and is very particular about- everything! He likes things on his own terms and I’d have to admit that his  first appearance actually gave me a bad vibe because he came across as a cold and to some extent, arrogant person but my impression of him did change towards the end of the episode.

Sheheryaar’s mother, Hajra (Ismat Zaidi) and father (Nadeem Baig) want him to tie the knot with his cousin, Sajal (Iqra Aziz). About Sajal, I didn’t get any vibe from her- not even a negative one! And that’s because the actress is expressionless and it seems like she is not much into her character. Sajal’s character has given me absolutely nothing to look forward to. What’s different about her character? Zilch! She is in love with Sheheryaar- too bad Sheheryaar couldn’t care less! This sounds so familiar because this track has been done to death and these bachpan ki baat pakkian seriously need to stop. 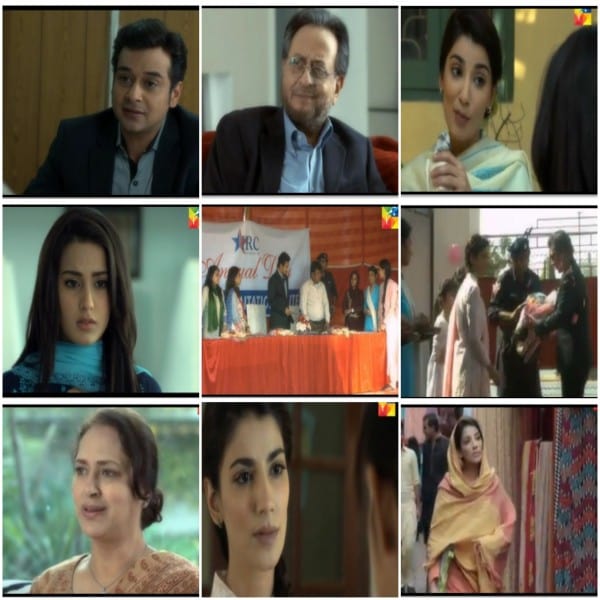 Sajal’s parents, i.e. Sheheryaar’s Chacha and Chachi are a little too desperate, if you ask me. Also, their dialogues were very lame. ”Mein tou apni beti kay paida honay say pehlay hi uss kay farz say azaad ho gaya tha. Yaad hai Bhai Jaan, kis tarah bachpan mein Sheheryaar ussay god mein uthaye phirta tha?” Do they have any idea how sickening such dialogues are and the fact that they are coming from so-called educated and modern people makes it even worse! Hate to burst their bubble but the Sheheryaar they’re talking about is now a 35-year old man who doesn’t even remember what they’re talking about.

As the episode progressed, we got a clearer insight into Sheheryaar’s character. Sheheryaar stays aloof and distant from his parents and he is not on good terms with his father in particular and there’s a background to it. Sheheryaar’s father is quite an overbearing person- he always kept his son at an arm’s length and failed to give him the time and attention he deserved. Sheheryaar was sent away from home for his studies and as a result, he stopped depending on his parents when it came to making decisions. Now that he is a self-reliant and independent man, he refuses to accept the decisions imposed on him by his parents. He doesn’t want to marry Sajal because of the obvious age difference and also because he wants to make this decision on his own. It’s good to see that Sheheryaar doesn’t have a strained relationship with his mother. I liked how Hajra tried to reason with her husband to make him view things from Sheheryaar’s perspective.

Sheheryaar is a Deputy Commissioner and he has an honest and responsible attitude towards his job. He moves to Sukkur by choice and I think after he reached Sukkur, I actually got a chance to connect to his character. His conversation with Imtiaz Sahab (reminder: Imtiaz Sahab is Emaan’s father) about Sukkur was interesting and well-written.

Sheheryaar and Emaan’s paths cross each other when the school where Emaan works in arranges an Annual Function and Sheheryaar is invited as the Chief Guest. I think that istiqbaal could have been better because Chief Guest ko phool pattiyan kaun phekhta hai? Sheheryaar’s little gestures like reaching the school early to keep the children from waiting showed that behind the stiff and cold facade, there lurks a down to earth individual.

Sheheryaar develops a liking for Emaan because of the fact that Emaan is a strong headed individual- she voices what she feels is right and big names don’t intimidate her. Sheheryaar also likes the fact that she is genuinely concerned about the children she works with. And yes, she is the only woman not smitten with Sheheryar’s charm so that makes her stand out :P. Her dialogues while addressing Sheheryaar were well thought out but I think they could have been cut short. I don’t know if it’s just me but it almost felt like Emaan was delivering a speech memorized or learned by heart. I’d have to say that the supporting actors (Emaan’s colleagues) must work on their dialogue delivery.

Since this was an introductory episode, it’s too early to give a verdict. And yes, I had an issue with the lighting today. I wish they fix it soon. So how many of you watched the episode? Are you looking forward to this play? Voice your views :)